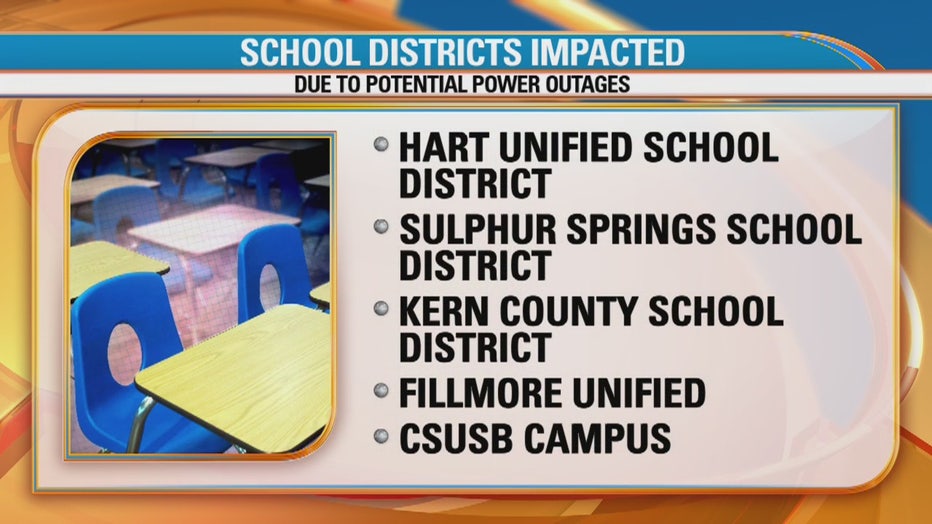 A Red Flag Warning went into effect at 3 a.m. Thursday and remains in effect through 6 p.m. Friday.

SoCal Edison warned residents of a potential public safety power shutoff that would essentially disconnect power lines that could be damaged in high winds, fall, and spark a fire. The electricity supply company also warned those with medical needs who are dependent on electricity to consider staying somewhere else until conditions change.

"I would rather that they turned it off honestly because we were a victim of the fire last year and perhaps that would've saved us all and saved our home," a resident told FOX 11.

California State University San Bernadino announced classes would be closed and business operations were suspended. The Palm Desert campus would remain open, the college announced in a tweet.

The following schools are also impacted by the Red Flag Warning:

Both schools would start two hours late, the district announced. Parents would be notified by 8 a.m. if classes would be canceled for the day.

Fillmore Unified School District
All schools and offices would be closed on Thursday and Friday. All school events, activities, athletic competitions were also canceled until further notice. “The safety and security of students and staff is our highest priority,” the district said.