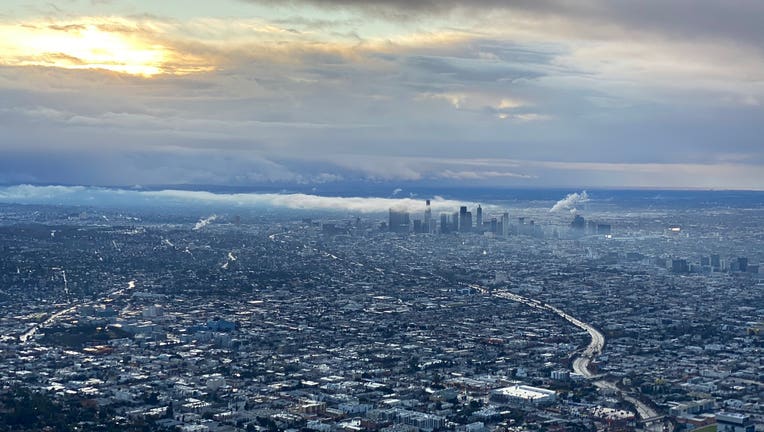 LOS ANGELES - Southland residents awoke to rain, wet roads, sporadic flooding and mountain snow today as the first major storm of the season brought a taste of winter to the region, and forecasters said scattered showers will continue through the afternoon before the system moves away.

Lightning flashed and thunder pounded as the storm front swept across the region in the middle of the night, unleashing downpours followed by bands of rain that were expected to continue through the afternoon.

"The good news was the front was moving quickly which prevented any serious flooding from occurring," the National Weather Service‘s Los Angeles region office said.

First major storm of the season arrives in SoCal

Although rain fell seemingly throughout the night in some parts of the basin, as of early Monday morning the National Weather Service indicated that most of Los Angeles County had received less than an inch of precipitation. But the isolated showers expected into Monday evening might change that.

Portions of Santa Barbara and San Luis Obispo counties were hit harder, with some areas receiving more than an inch-and-a-half of rain. For those looking for a trip to the mountains, Mountain High received up to 10 inches of snow, while Pine Mountain had about 6 inches. Lower-elevation Frazier Park received about 4 inches.

There were reports of some flooding overnight, including on the 10 Freeway in El Monte. Forecasters also warned of a continued possible threat of debris slides in recent burn areas, saying some areas could get brief downpours that could trigger slides, particularly later in the day Monday.

The system also brought snow to the Sierra Nevada and showers to parts of Northern California on the heels of a Christmas Day storm.

The storm came as a surprise to Los Angeles Lakers star, LeBron James.

Temperatures also dropped precipitously Monday, with highs only reaching 57 degrees in downtown Los Angeles, the low to mid-50s in the San Fernando Valley and Orange County, and 49 in Lancaster.

Our first real winter storm is moving in overnight.

A high surf advisory will be in effect at areas beaches until Wednesday morning.

The rain is expected to clear out by Tuesday, but temperatures will remain on the lower side. A cold weather alert is in effect through Wednesday for Lancaster, through Tuesday for Mount Wilson, and Tuesday and Wednesday for the Santa Clarita Valley. Near-freezing or freezing temperatures are expected overnight in those areas.