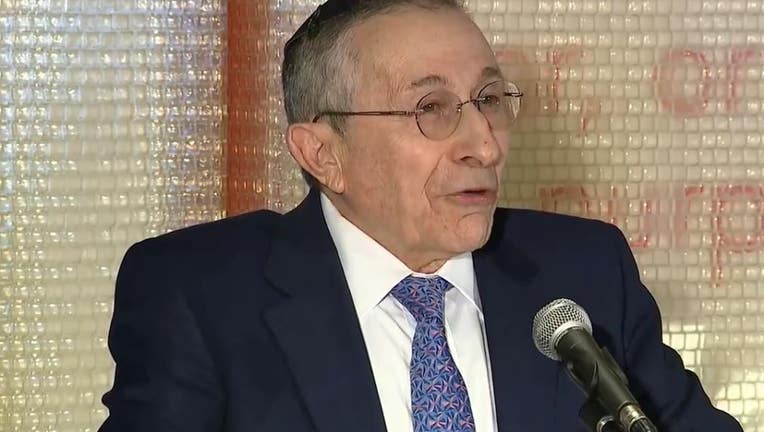 LOS ANGELES - Rabbi Marvin Hier, dean and founder of Simon Wiesenthal Center, called on President Donald Trump Monday to instruct the FBI to create a special task force in response to a series of attacks against Jews and their religious institutions.

"The FBI has the resources, the financial resources to do that job," Hier told reporters at the center. "We are now in an emergency situation and we call on the president of the United States to create a task force ... on anti-Semitism to combat this cancer before it gets worse."

The Simon Wiesenthal Center also urged black leaders to speak out against the spate of recent hate crimes in New York and New Jersey carried out by black suspects. The center, based in the Pico-Robertson district, is an international Jewish human rights organization that combats hate and anti- Semitism around the world.

Hier's comments came after five people were hospitalized as the result of a machete attack at the home of a rabbi in Monsey, New York, 36 miles north of New York City. New York Gov. Andrew M. Cuomo, visiting the rabbi's home on Sunday morning, called the attack an "act of domestic terrorism." A 38-year-old suspect was later arrested in Harlem in connection with the attack.

Pointing to the New York attack and other well-publicized recent incidents of anti-Semitism, Hier said, "This is a terrible moment in American history."

"Imagine the United States, the greatest democracy in the world, where anti-Semitic attacks occur almost every day, many unreported because people are scared," he said.

Hier, who delivered one of three benedictions during President Donald Trump's 2017 inauguration, rejected the notion that the nation's divisive political climate or any particular politician was responsible for a spike in anti-Semitism.

"All of that is nonsense," he said. "Why is it nonsense? Where are we? We know for 15 to 20 years the cancer of anti-Semitism has affected every European country. ... Now it's crossed the Atlantic. It's right here in Los Angeles, in San Francisco, in New York City, in the Midwest."

"We have political division," he said. "Political division is part of our country. ... This is beyond that. It's absolutely unbelievable that this is taking place in the United States."

Trump on Sunday denounced the violence in New York.

"The anti-Semitic attack in Monsey, New York, on the 7th night of Hanukkah last night is horrific," Trump tweeted.  "We must all come together to fight, confront, and eradicate the evil scourge of anti-Semitism."

The attack prompted the Los Angeles Police Department to increase patrols near synagogues "out of an abundance of caution," according to Chief Michel Moore.

Mayor Eric Garcetti, Los Angeles' first elected Jewish mayor, also referred in a tweet Sunday to a shooting at a church near Fort Worth, Texas that left two people attending the service dead before the suspect was fatally shot.

"The tragic attacks on faith communities in New York & Texas seek to make us afraid in our homes & sanctuaries, the places where we should feel safest,'' Garcetti tweeted. "But we refuse to live in fear. We will respond to anti-semitism & all forms of hate & violence with courage, solidarity & love."