LOS ANGELES - An inmate serving a life sentence at a California state prison recently called the Los Angeles County District Attorney’s office and left a voicemail, alerting them that he planned to "beat the s**t" out of a prison guard during an upcoming transfer so he could be eligible for resentencing under D.A. George Gascón’s jurisdiction, and FOX 11 has obtained the recording.

The inmate, Daniel Avila, is currently locked up at a state prison in Sacramento. 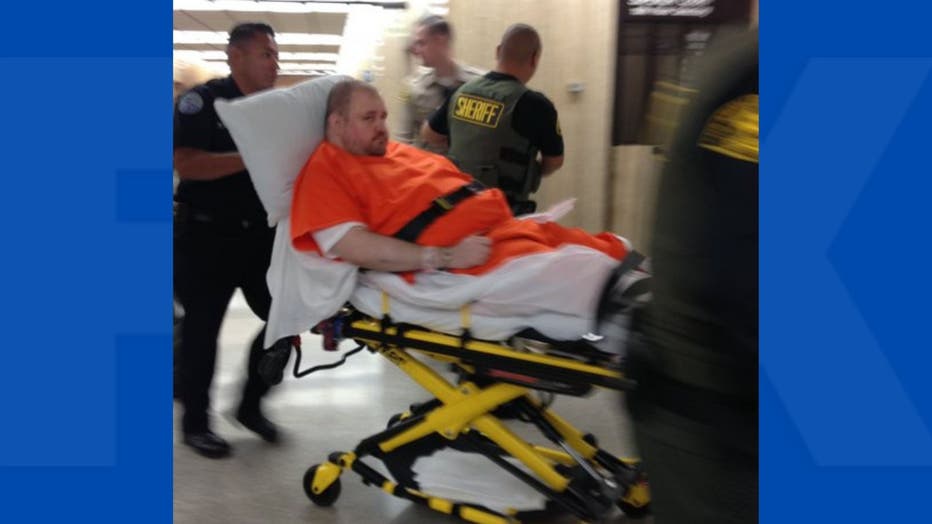 Avila is a third striker, and is currently serving a sentence of 140 years to life for a series of felonies, including three counts of attempted first-degree murder of a peace officer with use of a deadly weapon as a third striker, four counts of assault with a deadly weapon on a peace officer, making criminal threat to cause great bodily injury or death, bringing a firearm/weapon to prison, numerous enhancements for personal use of a dangerous weapon, as well as a myriad of other convictions.

FOX 11 has obtained an audio recording of a voicemail Avila recently left at the downtown LA DA’s office, where he notifies them that the state is planning to transfer him to Lancaster state prison in LA County within a month, and when he gets there, he plans to assault a prison guard to get back into LA County’s court system under Gascón, who has refused to prosecute strikes or enhancements as part of his reforms and has announced he plans to resentence 20,000 inmates.

"Now, I need you to listen to this message very carefully," Avila says in the recording. "My case is subject to the new special directives under Gascón. 90% of it is enhancements, and I’m trying to get back into court. And the thing is that I don’t want to do this, but I’m going to be forced if I don’t get some sort of communication with your office to speed up the process, okay? Because my mother is very ill, and I want to make sure I have an opportunity to be resentenced. I’m doing 140 years to life on that case and 90% of it is enhancements. If all the enhancements and prior strikes are dismissed, then I would only have like 15 years to do on these counts. I need you to listen to this very carefully, I need to make a decision between now and the time they transfer me as to whether I want to pick up a new case when I get there. And if I pick up a new case, they’re going to take me to the Lancaster courthouse, and I’m gonna force the judge’s hand to take a plea deal to consolidate the existing case and speed up the process, so basically I’m going to commit a crime to get into court. What I’m gonna do is, I’m gonna go down to Lancaster, and I hate to do this, but I’m gonna beat the s**t out of a cop when I get there when it’s LA County’s jurisdiction. And then I’m gonna go into court and then try to consolidate the case number I just gave you with the new case unless you’re gonna let me get away with doing that to a cop, I don’t think you want to do that. So you know, I’m reluctant to do that, but I’m gonna do what I need to do to get back into the LA County Court system."

Avila then ends the call by repeating his name, giving his case number, and giving his CDCR inmate number.

The California Department of Corrections and Rehabilitation tells FOX 11 they are "investigating these troubling allegations".

FOX 11 is awaiting a response from D.A. George Gascón’s office.

Avila would not appear to qualify for Gascón’s resentencing plans for roughly 20,000 inmates due to the nature of his crimes and his violent history.