The relief package aims to help pandemic and economic crises that have upended a nation, and its passage was a triumph for both Biden and Democrats, who erupted into applause moments after the roll call. Republicans in both chambers opposed the bill unanimously, characterizing it as bloated and crammed with liberal policies.

Most noticeable to many Americans are provisions to provide up to $1,400 direct payments this year to most adults and extend $300 per week emergency unemployment benefits into early September. But the legislation goes far beyond that.

The measure addresses Democrats’ campaign promises and Biden’s top initial priority of easing a one-two punch that first hit the country a year ago. Since then, many Americans have been relegated to hermit-like lifestyles in their homes to avoid the disease, which has also plunged the economy to its deepest depths since the Great Depression.

Hours after signing the legislation, Biden will mark a year of loss and disruption Thursday evening in his first prime-time address since taking office to steer the nation toward a hungered-for sentiment — hope — in the "next phase" of the fight against the pandemic that has killed more than 529,000 Americans.

Previewing his remarks, Biden said he would "talk about what we’ve been through as a nation this past year, but more importantly, I’m going to talk about what comes next."

RELATED: WHO declared COVID-19 a pandemic on March 11, 2020 — marking the start of a long, devastating journey

On Wednesday, the House gave final congressional approval to the sweeping coronavirus relief package by a near party line 220-211 vote precisely seven weeks after Biden entered the White House and four days after the Senate passed the bill.

For Biden and Democrats, the bill is essentially a canvas on which they've painted their core beliefs — that government programs can be a benefit, not a bane, to millions of people and that spending huge sums on such efforts can be a cure, not a curse. The measure so closely tracks Democrats' priorities that several rank it with the top achievements of their careers, and despite their slender congressional majorities there was never real suspense over its fate. 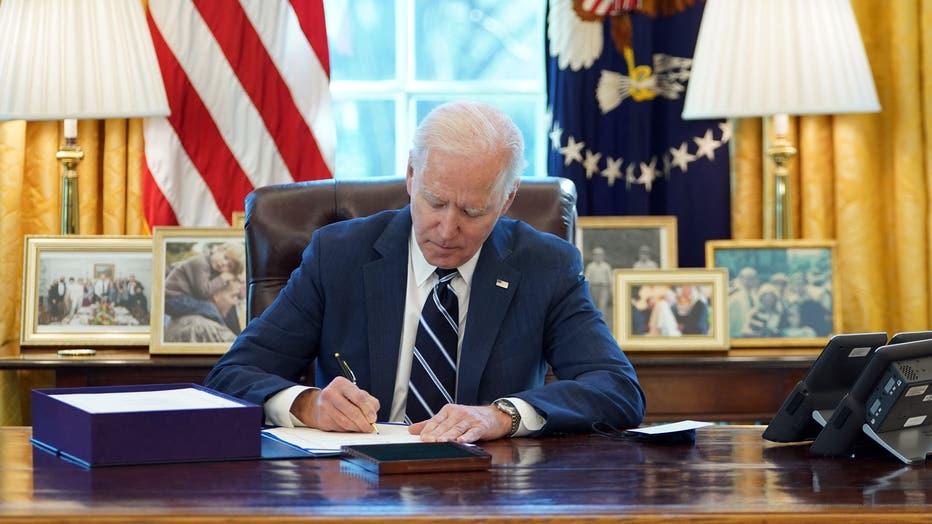 US President Joe Biden signs the American Rescue Plan on March 11, 2021, in the Oval Office of the White House in Washington, DC. - Biden signed the $1.9 trillion economic stimulus bill and will give a national address urging "hope" on the first anni (Getty Images)

Republicans noted that they've overwhelmingly supported five previous relief bills that Congress has approved since the pandemic struck a year ago, when divided government under then-President Donald Trump forced the parties to negotiate.

They said this one solely reflected Democratic goals by setting aside money for family planning programs and federal workers who take leave to cope with COVID-19 and failing to require that shuttered schools accepting aid reopen their doors.

Biden’s evening remarks in the East Room are central to a pivotal week for the president. Not only did Congress approve his $1.9 trillion "American Rescue Plan" aimed at easing the economic impact of the virus on tens of millions of people, but the U.S. was on pace to administer its 100 millionth dose of vaccine as soon as Thursday.

On Monday, the Centers for Disease Control and Prevention also released initial guidance for how vaccinated people can resume some normal activities.

In his address on Thursday night, Biden will be tasked with honoring the sacrifices made by Americans over the last year while encouraging them to remain vigilant despite "virus fatigue" and growing impatience to resume normal activities given the tantalizing promise of vaccines.

RELATED: Will COVID-19 ever go away?

Speaking on the one-year anniversary of the World Health Organization's declaration of a pandemic, he'll mourn the dead, but also project optimism about the future.

"This is a big moment," said presidential historian and Rice University professor Douglas Brinkley. "He’s got to win over hearts and minds for people to stay masked and get vaccinated, but also recognize that after the last year, the federal government hasn’t forgotten you."