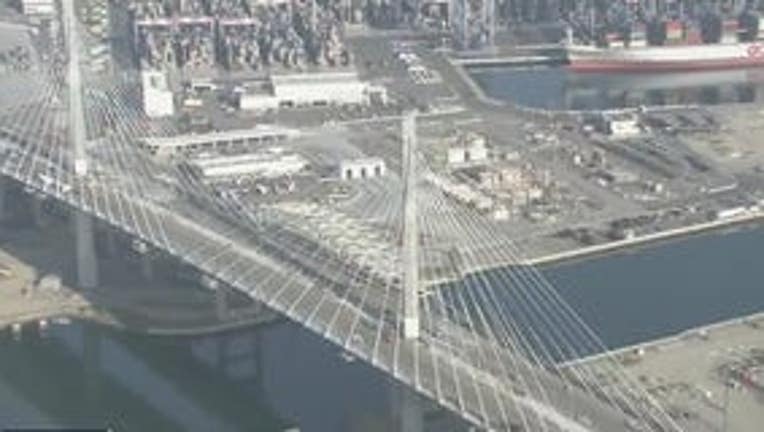 LONG BEACH, Calif. - The Port of Long Beach announced Friday that the already-decommissioned Gerald Desmond Bridge will be demolished in May to allow better access to the port's Inner Harbor for large cargo vessels.

The 5,134-foot-long through-arch bridge was closed to traffic in October 2020, when a replacement bridge opened.

The dismantling and removal of the Gerald Desmond Bridge's main span will require the waterway that runs under the bridge, called the Back Channel, to close to vessel traffic from 6 a.m. May 7 to 6 a.m. May 9, according to port officials.

Significant waterway impacts are not expected after that first two-day closure, according to port officials. The $59.9 million demolition project is scheduled to be complete by the end of 2023.

Vehicle traffic, which is already using a replacement bridge, will not be affected by the demolition.

"The Gerald Desmond Bridge helped this port complex become one of the busiest in the world. It helped us reach new heights during an era of incredible, transformative growth in international trade," said Port of Long Beach Executive Director Mario Cordero. "We will bid a fond farewell to the Gerald Desmond, and honor the memory of the man for whom it was named. The new bridge that replaced it is a fitting and lasting tribute to the old span."

The bridge opened in 1968 and was named for former Long Beach City Attorney Gerald Desmond, who had secured the funding to build the bridge.

"The Gerald Desmond Bridge served this port, city and region well over 50 years," said Steven Neal, president of the Long Beach Board of Harbor Commissioners. "It was time to build a safer, taller and wider span that will allow the Port of Long Beach to remain a primary gateway for trans-Pacific trade well into the future."

Funding for the demolition was included in the $1.57 billion budget to build the replacement bridge. The port awarded a contract for the project in July to Kiewit West Inc.