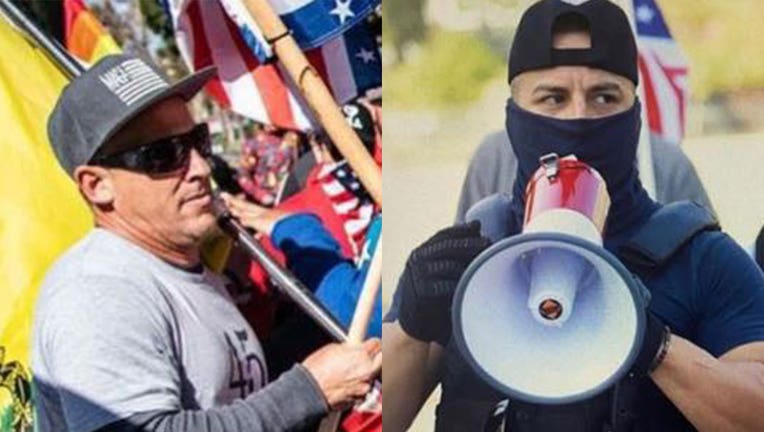 The LAPD is asking for the public's help in identifying two people of interest involved in an alleged Hate Crime/Battery that occurred January 6 in front of Downtown LA City Hall. Any info call LAPD Central Detectives 213-996-1248 or remain anonymous

LOS ANGELES - Police Tuesday continue to look for the public's help in identifying two men who are "people of interest" in a reported hate crime that took place outside City Hall, when a Black woman was accosted by a group of pro-Trump demonstrators who, she said, called her racial slurs and assaulted her.

Photos of the woman being grabbed while surrounded by a crowd holding flags and wearing Trump hats at a protest in downtown Los Angeles on same day a destructive mob breached the U.S. Capitol were shared widely on social media.

Berlinda Nibo, 25, was later interviewed by police, and a hate crime and battery report was completed.

Two men who were photographed among a group surrounding Nibo were being sought by police. 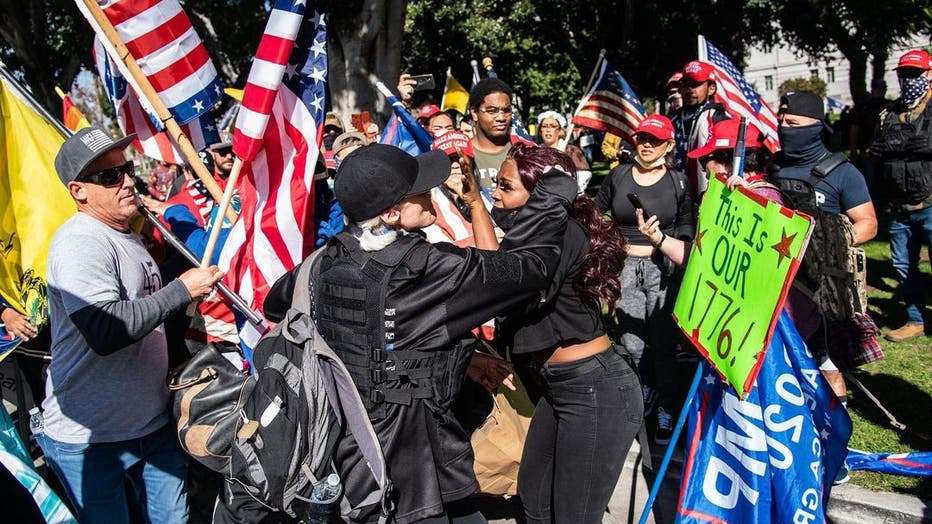 One man, described as roughly 40 to 45 years old, white and roughly 6 feet tall, was seen in one of the pictures wearing a gray hat with an American flag on it and a gray shirt with "45" on the front. 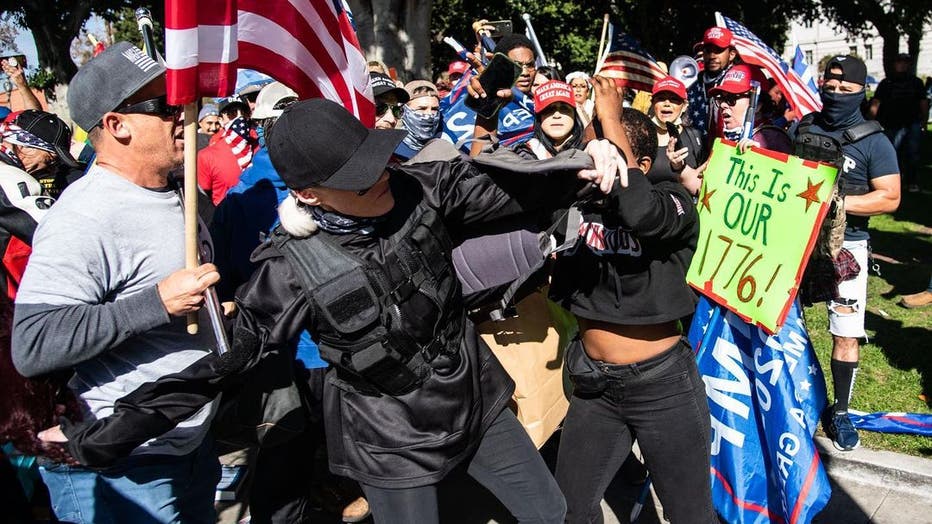 A second man, described as white with brown eyes, about 6 feet tall and 180 pounds, was wearing a black hat, black tactical vest and ripped jean shorts in the photos. Police said the man is roughly 30 to 40 years old.

"There is zero tolerance for crimes based in hate and the department will aggressively pursue every lead to bring individuals to justice," the department said in a news release.

Nibo told the Los Angeles Times she had come upon the protest
Wednesday while walking to get breakfast with a friend. The pair initially crossed the street to avoid the crowd, but soon after realized the friend's phone was missing. She told the Times she began calling it while her friend rode on a skateboard through the crowd to look.

That's when people began following her, asking her whether she knew who Joe Biden is and if she voted for Donald Trump, Nibo told the newspaper.

Nibo told the paper she flipped off members of the crowd and people began shoving her before someone grabbed her phone and one woman tore off her wig.

A man then came up and grabbed her from behind, holding her so she couldn't move.

Nibo told the Times she thought, "I'm dead right here, these people are trying to kill me."

The man, who was photographed holding Nibo, "was determined to be a Good Samaritan that helped her get away from the hostile crowd, by carrying her to safety," LAPD wrote in a tweet the next day. Nibo said the man was whispering in her ear, telling her to "calm down," and that he wasn't going to hurt her, she told the Times.

The Good Samaritan was an employee of a Southern California Toyota dealership and, according to a tweet from Toyota, the man was no longer employed by the dealership.

The newspaper reported that an LAPD spokesman said the agency opened a personnel investigation over complaints by Nibo that officers at the scene did not try to investigate the attack despite her urging.

In a news release Monday, the LAPD said "the department is committed to ensuring all efforts are made to support prosecution of this alleged hate crime while ensuring that people of every background are protected and served with equality."

Anyone with information on the people of interest can call the department at 213-996-1248.