Woman speaks out after being violently attacked in downtown LA

A local woman is speaking out after she was attacked by a group of pro-Trump protesters in downtown LA.

LOS ANGELES - A woman is sharing her story after she says she was attacked by a group of pro-Trump protesters near LA City Hall Wednesday.

25-year-old Berlinda Nibo was animated and upset as we talked on the sidewalk outside her apartment building following a day where she was clearly the victim of an attack by a group of Trump supporters in downtown LA.

Photos taken by freelance photographer Raquel Natalicchio, show Nibo fighting off a group that ripped her long wig off and started shoving her, using racial slurs and asking about her political preference. At one point a man grabbed her in a bear hug, not to hurt her, but to try to shield her. 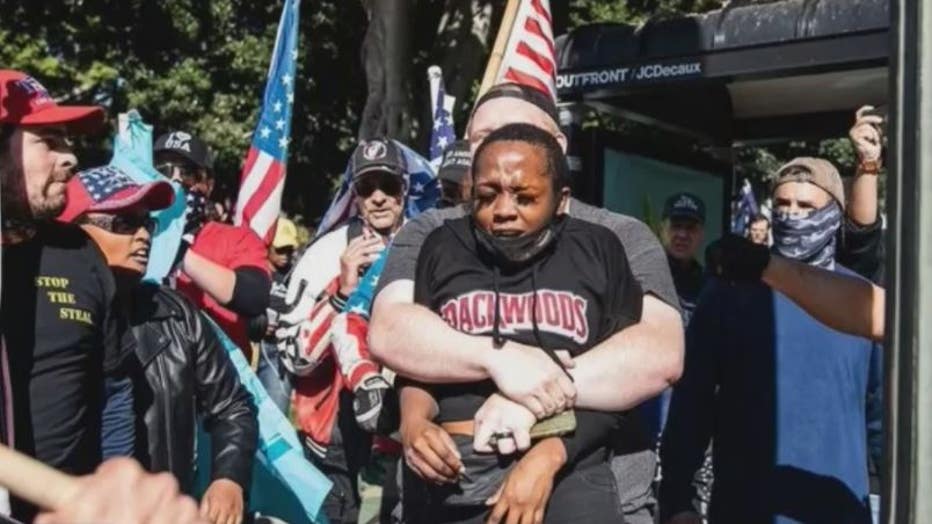 Nibo says her worst injury was a scratch to the face as someone was trying to grab her phone as she tried to record the protesters.

LAPD says police spoke with Nibo, according to a statement on social media.

‘’I’m still so shocked… I’m still shaking. I haven’t slept all night. My family’s calling me every second, my friends calling to check on me," Nibo told FOX 11's Phil Shuman.

She says police were across the street and did not intervene. "How could they not see it?"

A police spokesperson told FOX 11 they were unaware of the incident until they started getting calls from people and saw the social media posts.

LAPD made six arrests on Wednesday; and they encourage any victim, in particular Nibo, to come forward.

Raquel said she didn’t want her face shown on video out of concern for her own safety, but said it was important to tell this story to show "there is still racism out there."