SACRAMENTO, Calif. - Pacific Gas & Electric and California Gov. Gavin Newsom announced a deal Friday that removes one of the last hurdles for the nation’s largest utility to emerge from a bankruptcy triggered by its massive liabilities from wildfires.

PG&E agreed to overhaul its board and operations and to a process that would put the company up for sale — essentially allowing the state to take over — if it doesn’t get out of bankruptcy by June 30.

“This is the end of business as usual for PG&E,” Newsom said in a statement.

What makes the settlement unique is the company’s agreement to sell itself to the state or another buyer if the utility is unable to succeed after the reorganization, said Jared Ellias, a University of California, Hastings College of the Law professor who has been tracking the case. 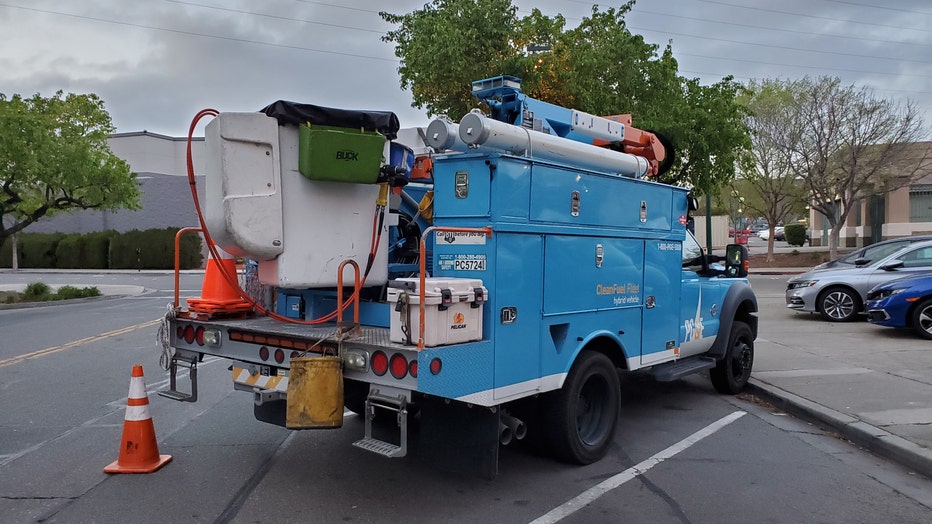 View from behind of a Pacific Gas and Electric (PGE) truck completing repairs in Walnut Creek, California at dusk, March 5, 2020. (Photo by Smith Collection/Gado/Getty Images)

“I’m not aware of any utility that has agreed to such a thing. It’s pretty incredible they were able to work that out with the state,” Ellias said.

That possibility will “cast a shadow on the company” and motivate it to improve and maintain the safety to its equipment, he said.

The utility said in a bankruptcy court filing Friday that it will agree to increased regulatory oversight and commit billions of dollars in additional spending to prevent wildfires, meeting a critical demand by the governor.

“Through California’s unprecedented intervention in the bankruptcy, we secured a totally transformed board and leadership structure for the company, real accountability tools to ensure safety and reliability and billions more in contributions from shareholders to ensure safety upgrades are achieved,” Newsom said.

Newsom has unusual leverage over PG&E as it tries to emerge from one of the most complex bankruptcy cases in U.S. history. The company needs state approval of its bankruptcy plan to qualify for coverage from a $21 billion wildfire insurance fund that California created last summer. He rejected the utility’s earlier plan in December and wouldn’t agree to a revised version a month later.

Now, with Newsom’s support, the company anticipates state regulators’ approval “so that we can exit Chapter 11, pay wildfire victims fairly and as soon as possible, and participate in the state’s Wildfire Fund,” CEO Bill Johnson said in a statement.

The utility’s outdated system triggered a series of catastrophic wildfires in 2017 and 2018 that killed so many people and burned so many homes and businesses that the company had to file for bankruptcy early last year. PG&E left millions of Californians in the dark for days at a time last fall as it shut down power in a bid to prevent its equipment from sparking more wildfires.

The San Francisco-based company faced more than $50 billion in claimed losses from the fires, prompting the utility to file for bankruptcy for the second time in less than two decades.

Democratic Sen. Bill Dodd, whose wine-country district was scorched by the 2017 blazes, praised an agreement he said will bring “transformational change.”

The company on Friday agreed to put another $4 billion in equity into the settlement by halting any payment of dividends to shareholders for about the next three years.

It agreed to hold ratepayers harmless if the plan is approved.

It will use about $7.6 billion of shareholders’ assets to repay or refinance some of its debt. And it will save about $1.4 billion by restructuring certain bonds that benefit ratepayers.

Newsom said the state will have the legal power to keep pushing the company for a “total transformation” even after the company emerges from bankruptcy.

The revised proposal “will position the company to make necessary safety and wildfire mitigation investments in the coming years, partner with the State in achieving its bold climate goals, and, importantly, provide protection to California if the Chapter 11 process is not concluded in a timely manner,” said Johnson.

He, too, promised that what emerges will be “a new and transformed company” that can provide reliable and safe power across Northern California.

The bankruptcy judge is set to hold a hearing on the plan on May 27, after groups affected by the plan vote on its approval.

They include fire victims, some of whom have not been happy with the company’s proposal of a $13.5 billion settlement. U.S. Bankruptcy Judge Dennis Montali has signaled that he won’t approve it without support from the victims.