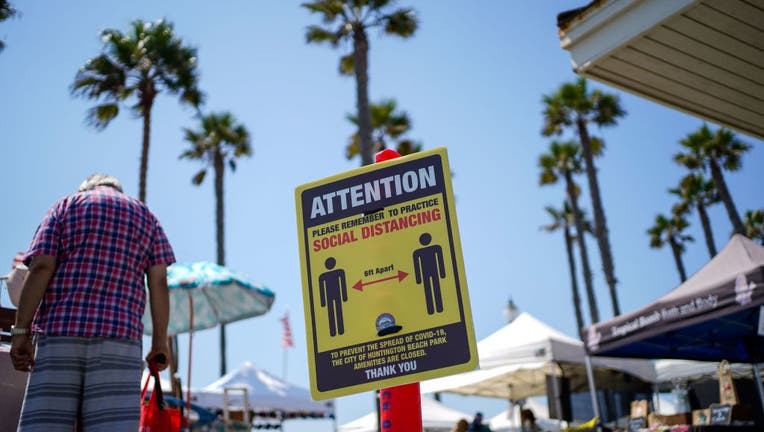 On Wednesday, the county reported 19 deaths. That makes 51 deaths reported since Sunday. Last week, 54 coronavirus deaths were reported, down from 72 the week before and 77 the week before that.

The deaths reported Thursday were spread out over the past few weeks.

The death confirmations come from multiple sources such as hospitals, so the reporting of them are staggered.

The last time the county reported double-digit deaths was Sept. 15, when 10 people died. The highest number of deaths announced in one day was 33 on Sept. 29.

Orange County CEO Frank Kim said the Board of Supervisors on Tuesday will consider increasing spending. on efforts to help improve safety at skilled nursing facilities.

He said Wednesday's new diagnoses topping 200 was a concerning sign, as officials want to keep new cases under that mark. Kim said both metrics were "too high in case count and deaths."

Officials are aiming for a weekly average of 130 daily, which would vault the county from the second-most restrictive red tier to the orange tier of the state's four-tier economic-reopening roadmap. The county has to remain under 225 to stay within the red tier, Kim said.

At a media briefing Wednesday, Orange County Sheriff Don Barnes said nine inmates have COVID-19; six of them newly booked and three who were transferred from one lockup to another. The height of the pandemic in the jail system was reached five months ago, when 220 inmates were infected, Barnes said.

The positivity rate, which is reported each Tuesday, inched up from 3.2% last week to 3.5%, but the daily case rate per 100,000 people declined from 5.2 to 4.6, moving the county closer to an upgrade from the red to the orange tier.

County officials throughout the state are working with the governor's office and the state Department of Public Health to see if there's some flexibility that could be allowed when counties are close to moving up a tier, Kim said.

Under the state's previous reopening system, hospital capacity was a key metric, but that data is no longer considered in the new tier system, he said.

Hospitalizations decreased from 165 Wednesday to 164 Thursday, while the number of intensive care unit patients increased from 60 to 66.

The change in the three-day average of hospitalized patients went from -3.3% to -2.2%. The county has 34% of its intensive care unit beds and 69% of its ventilators available.

Barnes said when the county reaches the orange tier he will move to restore visitation for inmates. He canceled visitations in March at the beginning of shutdown orders due to the rapid spread of the virus.

According to OCHCA data, 970,212 COVID-19 tests have been conducted, including 6,623 reported Thursday. There have been 50,459 documented recoveries.

Dr. Clayton Chau, director of the OCHCA and the county's chief health officer, said increased testing can lower the positivity rate, but it can also lead to an increase in the case rate per 100,000. The state introduced a health equity measure, which launched last Tuesday, to help counties address high case counts concentrated within certain ZIP codes that include high-density housing and language barriers, among other issues.

Orange County got a head start weeks ago with its Latino Health Equity program, which raised awareness of coronavirus within hotspots in Santa Ana and Anaheim, Chau said. Positivity rates as high as 20% have fallen nto single digits in some of those neighborhoods, Chau said.

There is an "accelerator" in the state's formula, under which a county with a positivity rate that qualifies for the least-restrictive yellow tier but a case rate that's in the red, the county would be permitted to move up to orange, Chau said.