ROSEVILLE, Calif. - Liz Jackson has felt that she’s had many gifts in life and none more noteworthy than the parents who adopted her and gave her what she described as a "golden" childhood. But a recent life-altering decision has unveiled hidden gifts that she had not known existed. 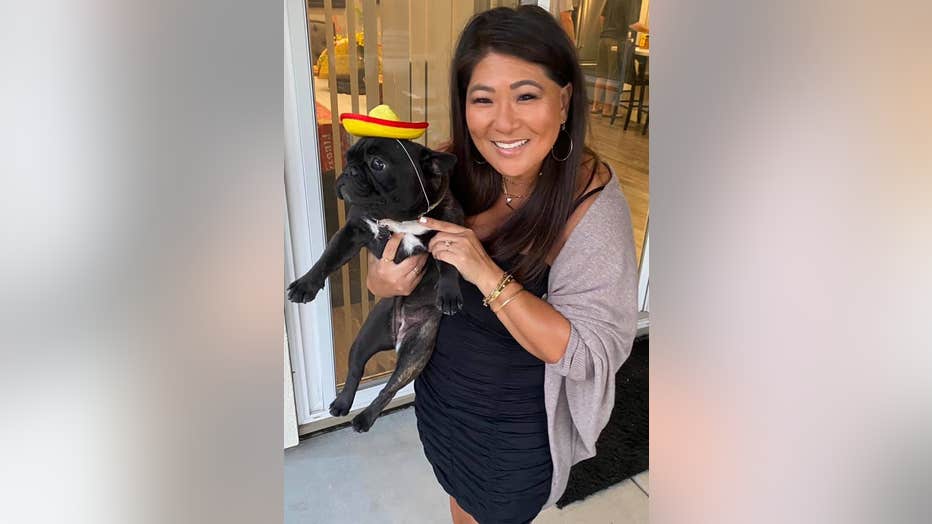 Liz Jackson of Roseville, Calif. began the process of searching for her birth mother last year. On June 28, 2021, she received information that would change her life. (Liz Jackson )

The 47-year-old Roseville resident and mother of two was adopted in November 1975 by Neil and Ann Jackson of Marblehead, Massachusetts. The Jacksons became her parents after she was initially adopted by another family in Minnesota. But at the age of two, she was taken away from that family. A broken arm and failure to thrive resulted in her being hospitalized at the Mayo Clinic in Rochester, Minnesota and led to the Jacksons getting "the call," as the family described the moment they would learn Liz would become a part of their lives.

"... my parents had to travel to Chicago the next day (the day before Thanksgiving) to pick me up," Liz Jackson explained as the story that she would be told by her family over the years. 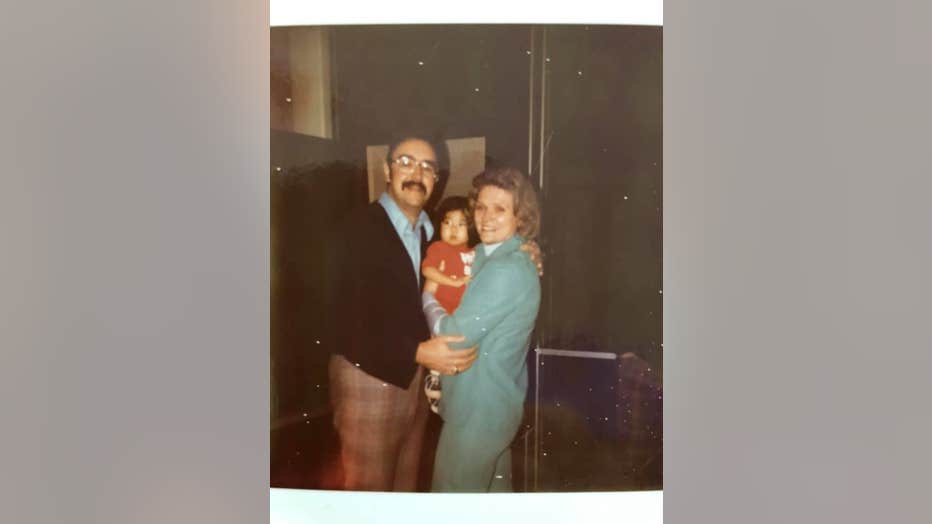 With the Jacksons, she would be the youngest of six children and the only one among them who was adopted. "My childhood was golden… I had a privileged childhood," Liz Jackson told KTVU as she described the close relationship she had with her family. She also told the story of her adoption and upbringing on Facebook, sharing, "I had amazing parents, a wonderful childhood and a family that loved me. I was not missing any part of me or needing to fill any gaping hole in my soul." 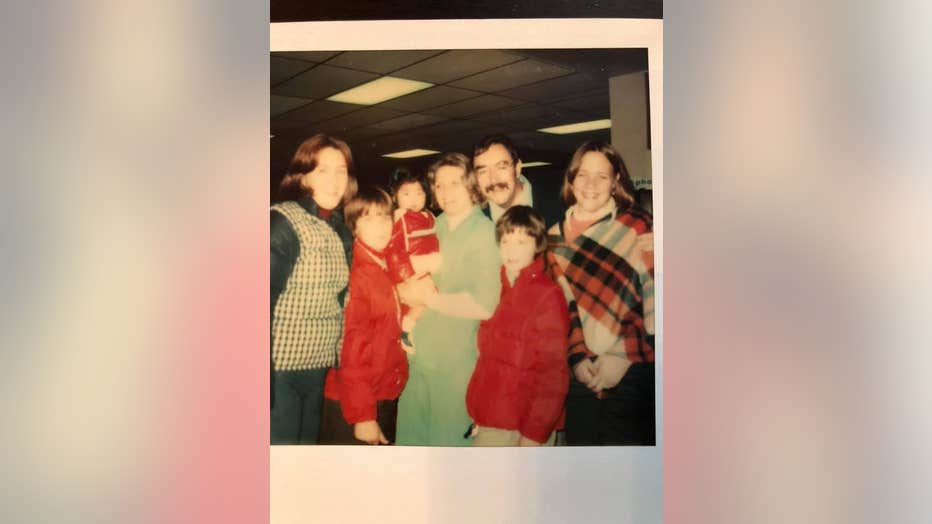 So Jackson said she went along most of her life never really feeling a desire to know more about her adoption history, despite her late mother broaching the subject with her.

"Before my mother Ann passed in 2000, she asked me several times over the years if I was interested in finding my biological mother, and I always refused," Jackson said, adding, "I didn't feel a need, or a longing, mostly because my mother was Ann." 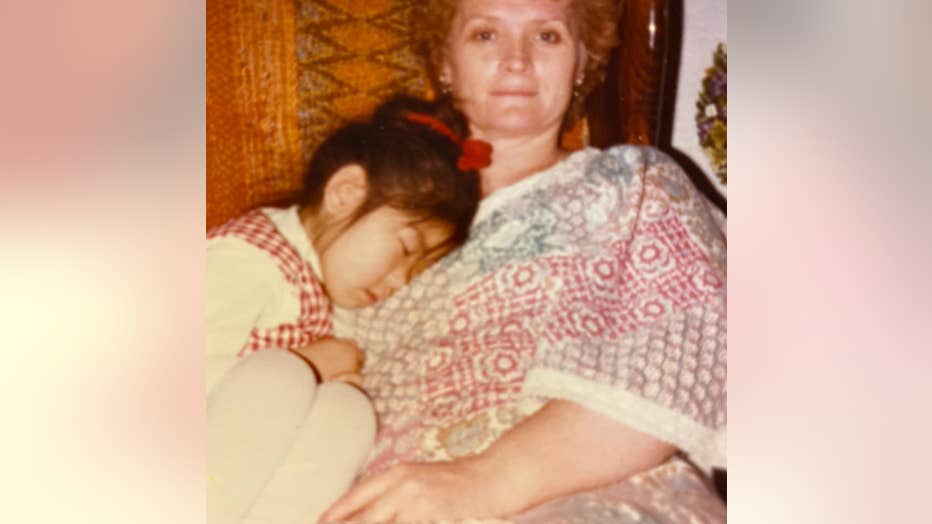 That curiosity, she said, was also largely driven by her wanting to explore her medical history, as she had been diagnosed with lupus in recent years.

But there were fears and deep rooted feelings that she had to face. "...even with a healthy and stable upbringing, as an adoptee (speaking personally only), there is the fact of having been rejected or displaced by your birth mother. Regardless of the circumstances, I was abandoned or relinquished, and that is the reality of the start of my life. I was very fearful of getting rejected again and that was my biggest hesitation," Jackson explained.

But with the help, support and encouragement from her boyfriend, she gathered the courage to begin the journey into her past. 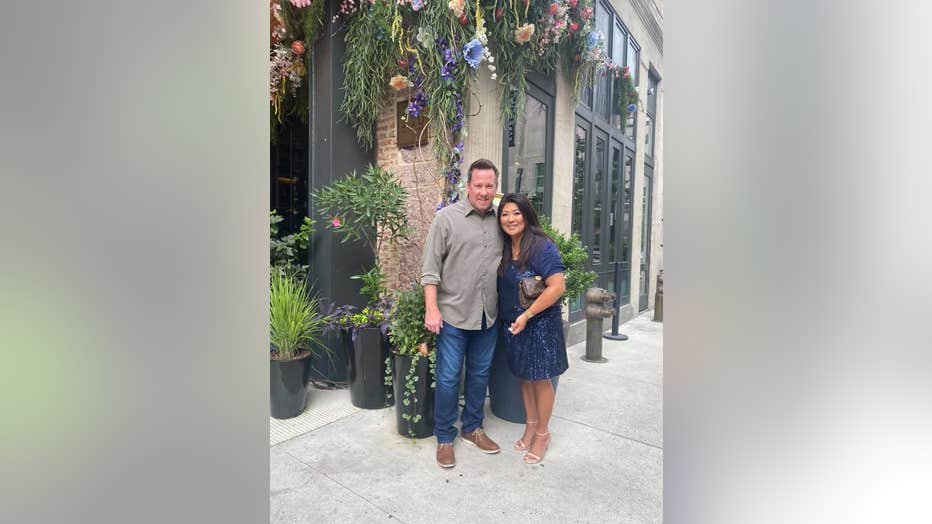 Liz Jackson with her boyfriend Dan Ness, who helped her make the decision to begin the journey into looking into her adoption history.  (Liz Jackson )

Jackson said that she began with DNA testing through 23 & Me and then dove into the arduous process of filling out forms, releases, and other documents with the Minnesota-based adoption agency which handled her first adoption from South Korea.

SEE ALSO: Single foster dad adopts five siblings so they can all stay together

"I had prepared for the worst and hoping for any nugget that would ease my curiosity," Jackson shared on Facebook on June 28.

The information unveiled would change her life but not in the way she expected.

"To my utter disbelief and surprise today I was notified that my birth mother has been located," she wrote, adding, "She is alive and well."

But she also learned that her birth mother had chosen to exercise her right to keep the adoption records sealed, did not want to be contacted, or have any other details including medical records released.

It was not the answer Jackson had hoped for, but it was something she was prepared for and something she could accept and respect.

"As a vigilant advocate of adoption, and the right of a woman’s choice, I honor and empathize with her decision," she wrote in her post. "She had the courage to put me up for adoption then, and I fully respect her continued decision now… I will respect her privacy, as I believe she’s earned that right."

But Jackson’s journey into her past didn’t end with a closed door with her birth mother’s decision to remain anonymous. In an incredible and unexpected turn, it went on to lead her to another open door that she did not see coming.

"...the amazing and mind blowing silver lining is the other details I was given… (ready for the mic drop?!!?)," she wrote on Facebook. "I have an identical twin sister!!!"

The idea of someone out there with her same DNA has been an unbelievable revelation, which she described as crazy, beautiful, and awesome news.

"It’s surreal," she wrote. "There’s another person in this world that has my identical genetics and I have hers. We are forever bonded but have yet to be connected. I’m an identical twin and my girls have a biological auntie!"

Jackson said that records from the adoption agency showed that her birth mother had twin girls, born on October 17, 1973 at a hospital in Pusan, South Korea.

Jackson guessed that her twin would have also been adopted sometime in late 1973 or early the following year by an American or European family. When Jackson was born, her given Korean name was Hyun Kyung Oh. Because her birth mother chose to keep the records sealed, she said that she didn’t know the Korean name her sister was given at birth. 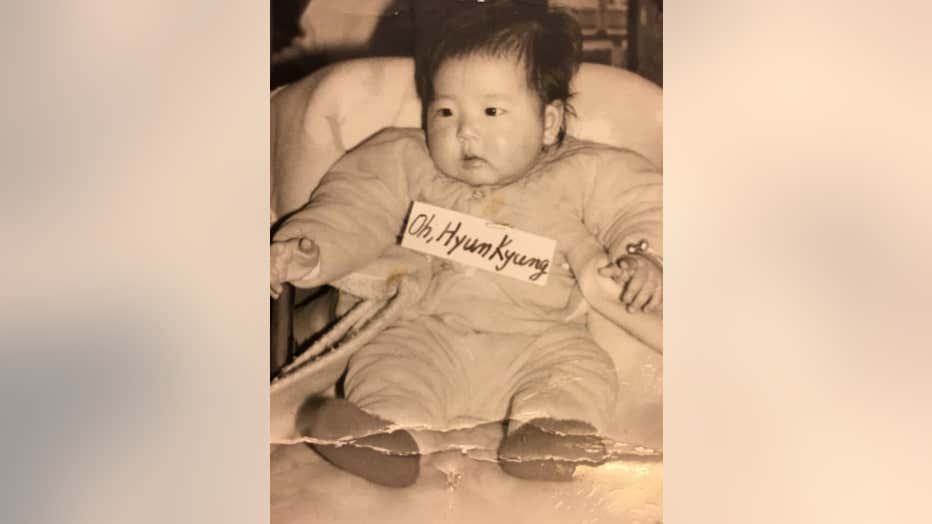 Baby photo of Liz Jackson of Roseville, Calif. In the search for her biological mother, she learned on June 28, 2021, that she was born in Pusan, South Korea and to her shock, found out that she has an identical twin sister.  (Liz Jackson)

Jackson said she initially wanted to share the information on Facebook to let her friends and family know about this huge development in her life. But she also decided to share the news with the hopes that the power of social media might help her find her sister.

"If my story resonates at all, please feel free to share and help me. My hope is that I may be able to locate my twin, if the internet makes it at all possible, and she is open and accepting to that possibility," Jackson said. "I hope her heart is full and open and somewhere in the back of her 47 year old brain, she listens to that curiosity too… and takes the same leap of faith," Jackson wrote.

But she also shared with KTVU that she was extremely mindful that her journey into her past may not be that of her sister’s and stressed that above all, she wanted to respect her privacy and space, as well as all those involved, including hers and that of her own daughters, saying that she has already received multiple inquiries from private investigators.

"This is my journey, not hers. I would hate for someone to go knock on her door, just to be sensationalized and intrusive," Jackson said, adding, "I especially do not want anyone taking on investigative role for my birth mother, trying to find her name or location, or to announce anything to my twin about what I do know about her. This risk causes me a lot of discomfort and fear," she said.

For now she hoped that putting her information and her photos out there might lead to a mutually joyous reunion with her twin.

Meanwhile, she’s been blown away by the reaction she’s received as her post has been shared more than 2.2K times on Facebook. The support has come not just from loved ones but strangers who have circulated her story far and wide to places including Sweden, Denmark and England, all with the hopes of helping her locate her twin. And that has been yet another gift.

"The reactions have been overwhelming… everyone is so excited, happy for me and desperate to help me in my search," she said.

From her own family, the reaction has been emotional, extremely supportive, and beautiful. "Every single one of my siblings, declared to me that they are positive that if Mom and Dad had known I had a twin sister, at the time of my adoption that they would have fought for both of us," Jackson said, noting that her family has reiterated that moving sentiment by saying, "Dad would have moved mountains, paid anything, and hell or high water, he would have fought for you and her to stay together."

And from her own two daughters, Grace, 21, and Annie, 19, they have been overjoyed with the news, especially given the possibility of having cousins who look like them. 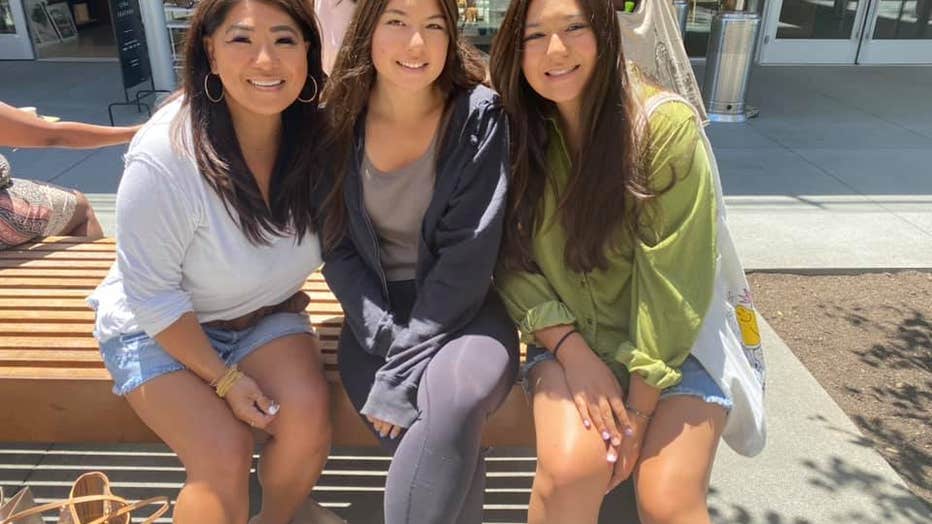 Liz Jackson with her daughters, Grace and Annie.  (Liz Jackson)

"I am so close to my nieces and nephews, and they are also very close to my sister Kim, but having an Auntie that is genetically connected to them would be indescribable. (Especially if she was a mirror image of me!)," Jackson said.

While she awaited the possibility of a reunion with her twin, the other gift she’s been able to reflect upon has been her renewed perspective as well as newfound gratitude toward her biological mother.

"I don’t have that previous fear of rejection, but real peace of mind that she is exactly where she should be," Jackson shared, "and I’m so grateful for and humbled by her bravery she displayed at the young age of 15."

Her feelings toward her birth mother were clear: "I do hope she has been happy and loved, as much as I have been," Jackson said.

She also said that through self-reflection and discussions with her boyfriend, she’s realized, "adoption was my savior… and what a gift and sacrifice my birth mother provided me."

Jackson ventured to credit her birth mother for helping her get to this place of peace. "I want to believe that I inherited some of her strength," she said. But ultimately, Jackson believed that it was the only mother she's ever known who helped foster and nurture that strength. "Ann Jackson provided me the safety and sanctity to develop it," she said.

The exploration into her past has offered her a series of gift after gift. And it’s with cautious optimism she remained hopeful to receive this next gift of finding the sister she lost at birth.

"I hope it’s possible. I hope she has that same need to listen to her inner curiosity, that low growl in the depths of her brain, that I’ve been hearing," Jackson said.

And if that reunion were to come, she envisioned the moment as one filled with tears and gratitude.

"I think I’d be speechless and just want to stare at her. I’m a very emotional person, so I think anything I would say, would be overshadowed in tears," she shared, noting that she would want to express how grateful she was. "Thank you for finding me, thank you for wanting to make the connection," she’d say.

And once she stopped crying, "I think my first words would be: I’m so happy to see you again."