A new mural commemorating Kobe Bryant's on-court feats -- the five NBA championships -- and off-court accomplishments -- like an Oscar -- was unveiled in the heart of Hollywood.

LOS ANGELES - Steps away from where NBA legend Kobe Bryant won an Oscar for "Dear Basketball," a new mural was unveiled in Hollywood on Thursday afternoon. Bryant is the only person who has won both an NBA championship and an Academy Award.

When thinking about the mural, artist Brian Peterson said the location would be key.

"Once I came up with the idea, I knew location was important so I wanted somewhere on Hollywood Boulevard where he received the award," he said.

The mural measures 25 feet by 45 feet and depicts Bryant at the Academy Awards, kissing the Oscar statue, which was a major milestone in his post-NBA career. The mural took several weeks to complete.

On Thursday afternoon, like a well-choreographed scene in a Hollywood movie, the curtain dropped and revealed the newest mural of the Los Angeles Lakers legend on Hollywood Boulevard and Highland Avenue.

Peterson wanted the mural to capture the legendary basketball star in a different light: Kobe as filmmaker and storyteller. Therefore, the mural shows Bryant in a tuxedo, as opposed to a Lakers jersey. 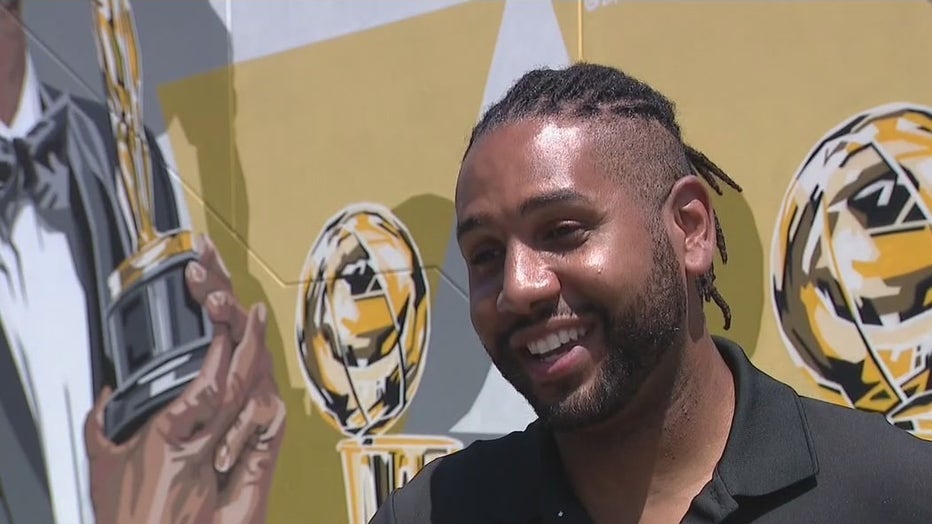 "Kobe modeled transitions so well and he’s transitioning from a great [in the NBA] and then landed on being a great in something else," said Peterson.

The mural also features one of Bryant’s quotes about his second career, which reads: "I feel better than winning a championship. When you start over you really have to quiet the ego. You have to begin again."

After the unveiling, fans were seen taking selfies in front of the new urban art.

"His legacy lives forever from the Oscars to the NBA," a fan told FOX 11.

Although the Bryant family was not in attendance for the unveiling, Vanessa Bryant wrote a sweet post on Instagram, writing: "More than an athlete. Always learning. Always teaching. "

The mural was also fan-approved.

"I think it’s fantastic. I think his legacy just lives on forever and hopefully it brings us some good luck tonight against the Suns," said Lakers fan Andre Ojedo.