A chance encounter changed the life of an Atlanta pianist who plays at the Atlanta airport. An author from Nashville used his influence on social media to get the man the largest tip he has ever gotten. It's at $60,000 and growing.

ATLANTA - A chance encounter has changed the life of a musician who works at Hartsfield-Jackson Atlanta International Airport.

"It's just a wonderful job. I run to work," Valentine said. 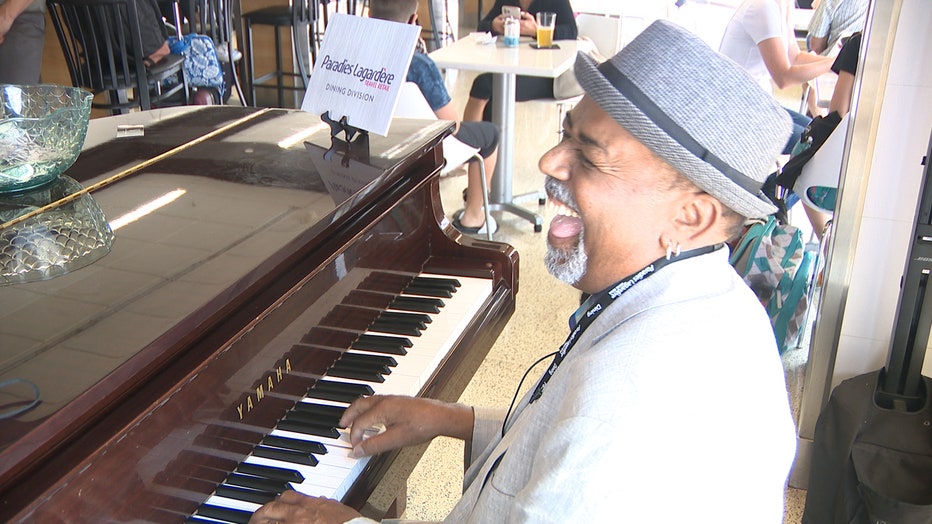 He's dressed in a suit, with a hat, and undoubtedly has a smile on his face as he plays for busy travelers who are grabbing a bite to eat.

Valentine said he started playing the piano at 5 years old and knew shortly after that he wanted to make it a career.

"I knew at six when my dad took me to see Ray Charles. I knew then," he said.

Valentine spent more than a decade on cruise ships, playing for passengers and seeing the world.

However, his health has made that a little difficult.

"He's been on dialysis due to kidney failure. He's a trooper. He's not identified by that. You can come in and see him play and you'd never know the daily regiment he has to go through," said Ty Berrian, his son-in-law.

For the last several years, he's been playing for passengers of a different type.

"This is just like working on a cruise ship, except I get to go home every day. You meet people from everywhere," Valentine said.

On Wednesday, one of those people happened to be Carlos Whittaker, an author, podcast host, and former musician.

"I just saw this guy playing the piano, just having the time of his life. Nobody was really paying attention to him. It was 10 in the morning and I thought, I'm going to go sit and hang out," Whittaker said.

Whittaker struck up a conversation with him and started sharing Valentine's story with his 195,000 followers on Instagram.

"A thing that I like to do with my Instagram following is just blessed people. So, I said I wonder what we can raise in 30 minutes. I can Venmo this guy some money," Whittaker said.

In 30 minutes Whittaker's followers, or his "insta familia" as he calls them, pitched in to give Valentine the largest tip he's ever received.

In the video, you can hear Whittaker break the news to Valentine.

Valentine, with a confused look on his face, said "Who is they?"

"One-hundred, seventy-five thousand strangers that loved your piano playing and I asked them to give you money... Now, I gotta go catch a flight. But you are loved. You're adored. I don't know what you need with 10,000 dollars but it's yours," Whittaker said in the video.

More than a day after their encounter, Valentine's tip is up to more than $60,000.

It's an act of generosity that has restored his faith and hope.

"He asked me, ‘Do you have any hope in humanity?’ I said, ‘No. I do now,’" Valentine said. "When people do things like that, total strangers and they hear my story and they want to give me a gift like that. Thankful is inadequate. I want to give back and help people like he's doing."