The FDA has formally approved Pfizer-BioNTech's COVID-19 vaccine for all individuals 16 and older.

CAMBRIDGE, Mass. - Moderna has passed a major milestone on its path to getting its COVID-19 vaccine fully approved by the U.S. Food and Drug Administration.

The pharmaceutical company announced Wednesday that it completed the rolling submission process for its Biologics License Application. The BLA, which Moderna began on June 1, involves submitting nonclinical and clinical data to support the licensure of the COVID-19 vaccine.

Now that it’s complete, Moderna has asked the FDA for priority review. Once granted, that would allow the FDA to take action within a six-month window, rather than the typical 10-month time frame.

In a news release, Stéphane Bancel, Chief Executive Officer of Moderna, said the company began its BLA process in June. He said it’s the first BLA submission in the company’s history.

Even so, it is not the first time an mRNA vaccine has gone through the BLA process. Just two days ago, Pfizer received full FDA approval of its COVID-19 vaccine — named Comirnaty.

Both companies received an Emergency Use Authorization (EUA) from the FDA in December 2020. Once shots began going in arms, America’s COVID-19 caseload plummeted.

But more importantly, the hospitalizations and death rates decreased significantly.

Cases didn’t begin rising again until the vaccination effort slowed to a crawl in the spring. The more infectious delta variant has led to a fourth wave of the pandemic that rivals the highs seen during the winter surge.

Still, the U.S. Centers for Disease Control and Prevention (CDC) has stressed the overwhelming majority of the hospitalizations and deaths have come from unvaccinated people. 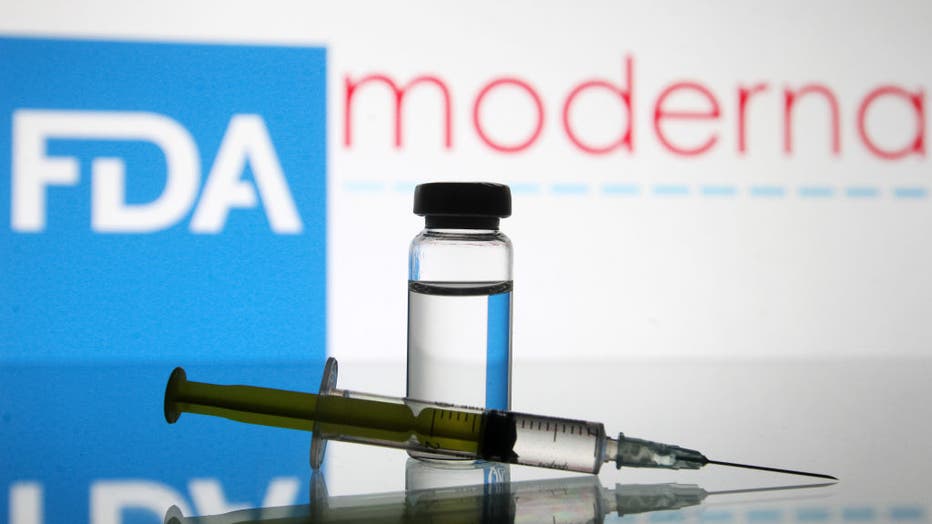 In this photo illustration, a vial and a medical syringe are seen displayed in front of the Food and Drug Administration (FDA) of the United States and Moderna biotechnology company's logos. (Photo Illustration by Pavlo Gonchar/SOPA Images/LightRocke

The vaccines have been available in surplus since April, but neither Pfizer nor Moderna were satisfied with that benchmark. The EUA only lasts as long as the public health emergency. In order to make sure the vaccines were available after the pandemic ends, both companies sought full FDA approval.

Pfizer’s path to full approval might offer the clearest picture of when Moderna can expect to achieve the same.

On May 7, Pfizer began its BLA submission. The FDA granted priority review to Pfizer’s vaccine on July 16 and full approval on Aug. 23.