LOS ANGELES - A judge ruled on Tuesday that a man who had been serving a nearly 48-year state prison term was factually innocent of a series of armed robberies at a Boyle Heights auto body shop more than a decade ago.

Los Angeles Superior Court Judge William C. Ryan vacated Ruben Martinez Jr.'s conviction on nine counts of second-degree robbery and made the finding of factual innocence, making him the third person to be exonerated following an investigation by the Los Angeles County District Attorney's Conviction Review Unit since its formation in 2015.

Martinez -- who will turn 50 next month -- said he spent 12 years and five months behind bars before being released last week. He told reporters that it was his darkest hour when he was convicted of the crimes but that "it was God's strength that got me through this."

"This case is about the persistence of the wrongfully convicted man, the unwavering love and support of the man's wife and my attorneys' dedication to the truth even when it means admitting that we were wrong," the county's top prosecutor said shortly after the judge's ruling.

"Although the vast majority of convictions are correctly upheld I know, at times, the pursuit of justice, which depends on human beings, is not perfect and Mr. Martinez's case serves as a stark reminder to all of us that despite our best efforts we don't always get it right," she said.

The district attorney noted that Martinez "bore a striking resemblance" to the perpetrator of five separate robberies between 2005 and 2007 at the same auto body shop, and that his alibi that he was at work when two of the robberies were committed was not fully presented at his trial.

The first jury to hear the case against Martinez deadlocked 9-3 in favor of a guilty verdict, with the second jury convicting him in a case in which he was eventually sentenced to 47 years and eight months in state prison. 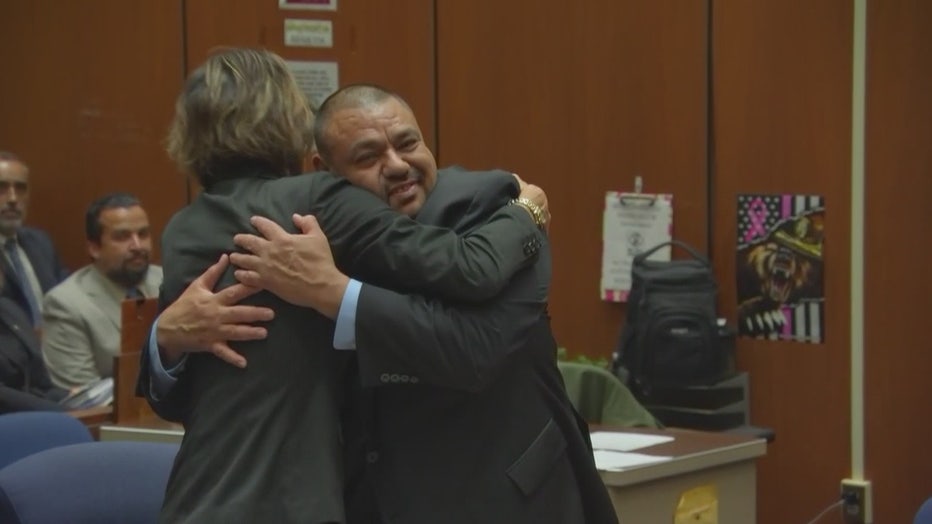 His case had gone through a series of appeals that were denied, and he was not represented by an attorney when the District Attorney's Conviction Review Unit began looking at his case.

"... I want to say to Mr. Martinez and his wife, Maria, on behalf ofthe office I am sorry for this injustice and I am so happy that you did notgive up on us and allowed us to share this moment," Lacey said, saying the couple proved to be "unstoppable in their pursuit of his freedom."

Martinez told reporters that he had "cried out to God in my prison cell" and that "God heard me."

"My prayers did not go unanswered," he said, saying his wife andf amily "did time with me" while he was behind bars.

Martinez's wife said all her husband wanted was for the truth to be revealed.

"Well, the truth has been revealed and he's a free man today," she said. "And, also, I want to say don't lose hope if you or a loved one are wrongfully convicted. One day justice will be served."