Film and TV productions in Los Angeles picked up in June. But there are signs now things may be slowing down again.

Analysts believe factors like the 2020 election, Thanksgiving and the pandemic are contributing to the slowdown.

Larry Laboe, the Executive Director and Co-founder of NewFilmmakers Los Angeles, spoke to FOX 11 about the impacts of the pandemic on the industry. His nonprofit  works with emerging filmmakers around the world, and offers a forum where filmmakers can be recognized for their work with a monthly film festival. The festival is now virtual due to the pandemic.

"We were able to pick up a lot quicker than a lot of annual festivals because our program is built out in these 30 day cycles so we didn't have to take 12 months of planning, preparation and programming and try to quickly reschedule it for four to five months down the line. We were able to pick up programming very quickly and get back on our feet by April," said Laboe, after having to cancel their festival in March due to the shutdown.

Laboe said independent filmmakers are being heavily impacted during this time.

"For independent filmmakers, the struggle has been massive, they don't have the budget to deal with COVID production protocols. It was already a struggle for the independent film community to fund their work. These are artists, struggling artists. They're generally raising their own money. They've generally got student debt from film school," said Laboe.

"You saw a lot of companies that would have been filming in LA, which has been a problem for a really long time, runaway production going to COVID safe countries like New Zealand and Australia that have really tackled the Covid problem head on," said Laboe.

Laboe said diversity is another issue for production moving forward because the focus is shifting due to the pandemic. Part of New Filmmakers Los Angeles' mission is diversity and introducing new voices to the industry.

"A lot of studios and networks as they're struggling with how to keep production going period, they don't really have the time and focus and energy for diversity and inclusion that was there before," he said.

Laboe said there are some positives for independent filmmakers during the pandemic though.

"We've seen the Hollywood community, the sort of more established commercial community more interested in acquiring or licensing independent films, short films during this time because they're all so hungry for content because of the lapse in filming and production," he said.

Laboe also talked about the impact on movie theaters.

"I don't think the demand for movie theaters is ever going to go away, but the big question is how many theaters are we going to lose from this pandemic," questioned Laboe. 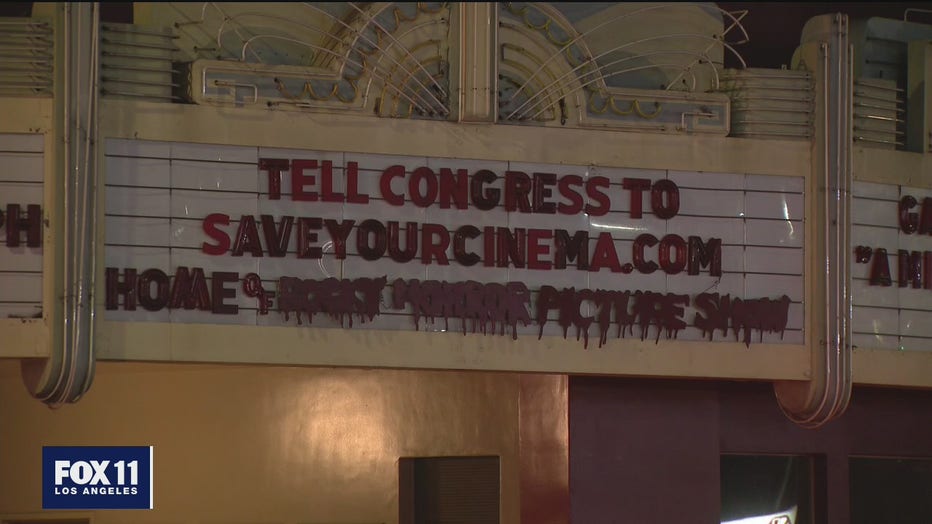 The Nuart Landmark Theatre on Santa Monica Boulevard is a staple in the community, and has been around since 1931.

"It [1931] was really a time of a great change in the movie industry going from silent films to the talkies and it was always a neighborhood theater [The Nuart]," said Margot Gerber, the Vice President of Marketing and Publicity for Landmark Theatres.

Gerber talked about the importance of preserving historic theaters.

"It's a part of our cultural heritage. The legacy of them, the neon marquees, and the culture of theaters, coming in for showtimes, and buying the concessions, it's all a tradition that's been around for over 100 years, and now it's really something special to preserve," she said.

The Nuart and other Los Angeles theaters have been shut down since mid-March from the pandemic.

"We have not been able to show movies. It meant having to lay off staff. It's just a matter of companies being able to last through this because landlords still want their rent and there's the cost of staying and holding your space until such time that you can do what you normally do," said Gerber.

Laboe said the industry is calling for federal help.

"We hope that the federal government will pass another bill, another stimulus to support the entire economy but, of course put some legislation in that bill to support the arts community, the cultural community, the entertainment industry because they really are all one in the same and they need each other," said Laboe.

Gerber mentioned the petition from the National Association of Theatre Owners urging Congress to provide resources to theaters.

"If you do love movie theaters and you frequent them in normal times you might be interested in helping out by signing a petition that's online at natoonline.org. It is a petition that was started by the National Association of Theater Owners to implore Congress to put some money into the next relief package for movie theaters so that we can bridge the gap between right now when we can't do our normal business and months from now when we are able to open normally," said Gerber.