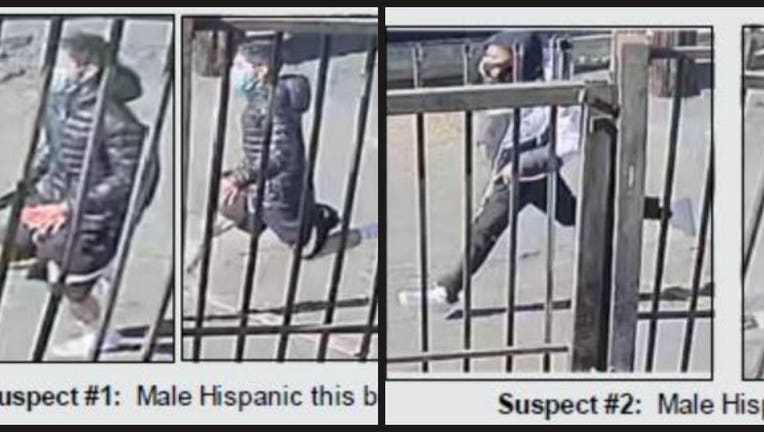 ALTADENA, Calif. - Authorities are searching for two suspects who were involved in an 'unprovoked ambush' of a deputy in Altadena on Friday.

The incident happened at about 12:34 p.m. Dec. 4 when the on-duty deputy was driving north on the 2500 block of Fair Oaks Avenue in her marked patrol vehicle.

The deputy was not struck by gunfire.

One of the suspect's black jacket and shoes were found near the location and was seen running in socks in a photo released by the L.A.Sheriff’s Department Wednesday.

The second suspect's white jacket was also found near the scene, authorities said.

The suspects are described as being Hispanic with a thin build.

"This is a very dangerous profession, but my deputies leave their homes and families each day/night knowing the risk they take to gladly serve our community, please stay safe!"  Villanueva went on to say he "will always condemn these unprovoked attacks on my Deputies. I want Deputies as well as Police Officers to stay alert and take care of your partners. "My Deputy is alive and unhurt, thank you to all those who have reached out to ask about her condition."

The shooting is under investigation and the suspects remain at large.

Anyone with information is urged to call the Altadena Sheriff’s Station at 626-798-1131.

Those wishing to remain anonymous can call Crime Stoppers at 800-222-TIPS (8477) or visit lacrimestoppers.org.