The website, vaccinatelacounty.com, is running again, but due to limited vaccine supplies, available appointments are limited.

The online appointment system to schedule the shots was operational again following an hours-long outage that occurred just as people flocked online to snare limited reservations.

Despite the Tuesday evening outage, thousands of people were still able to secure appointments for this week.

"While we are continuing to work with our state partners to improve the functionality of the website, we ask for the public's patience as we build capacity and supply," the notice states. "We may add additional appointments later this week and additional slots may open if people cancel their appointments."

Officials urged residents to use the call system only if they are unable to make appointments through the website.

If you are 65 years or older and live in California, you can now get the vaccine.

As of Wednesday afternoon, the online system showed some available vaccination times this week at a handful of sites, but appointments were fully booked at the county's newly opened vaccine site at the Pomona Fairplex.

The site at the Forum in Inglewood showed appointments available on Thursday, while Cal State Northridge had availability Wednesday and Thursday.

Appointments beyond this week remain murky, given uncertainty about the county's supply of vaccine doses.

County Public Health Director Barbara Ferrer said Tuesday the county was receiving 168,000 doses of vaccine this week, but there was no word on how many the county might receive beyond that.

Los Angeles County residents 65 and older are now able to receive the COVID-19 vaccine, according to an executive order signed by county leaders.

According to the county, as of the end of last week, the county had received 685,000 doses Wednesday, and just more than half of them had already been administered, with health care workers and residents/staff at skilled nursing and long-term care facilities having top priority.

Health officials originally planned to complete the vaccination of all health care workers before making doses available to residents 65 and older, despite recent guidance from the governor allowing the expansion of vaccine availability.

That process was expected to take until the end of January. But on Monday, county Board of Supervisors Chair Hilda Solis signed an executive order opening the shots to older residents.

"This is about equity," she added. "Older adults have been unfairly impacted by the virus. They've stayed home for months, isolated, which is as you know a problem in and of itself. But the COVID-19 vaccine is here. Hope is here."

The COVID-19 death toll crossed the 14,000 mark in Los Angeles County on Tuesday. The county reported another 186 deaths due to the virus, pushing the overall death toll to 14,122.

Health officials noted that the county statistics were skewed due to reporting delays from the holiday weekend.

Hospitalization numbers continued to stabilize, but at a high level, with the state reporting 7,253 COVID patients in the county, down slightly from 7,322 on Monday.

The number has been dropping slowly but steadily over the past week when patient totals topped 8,000, overwhelming medical centers. 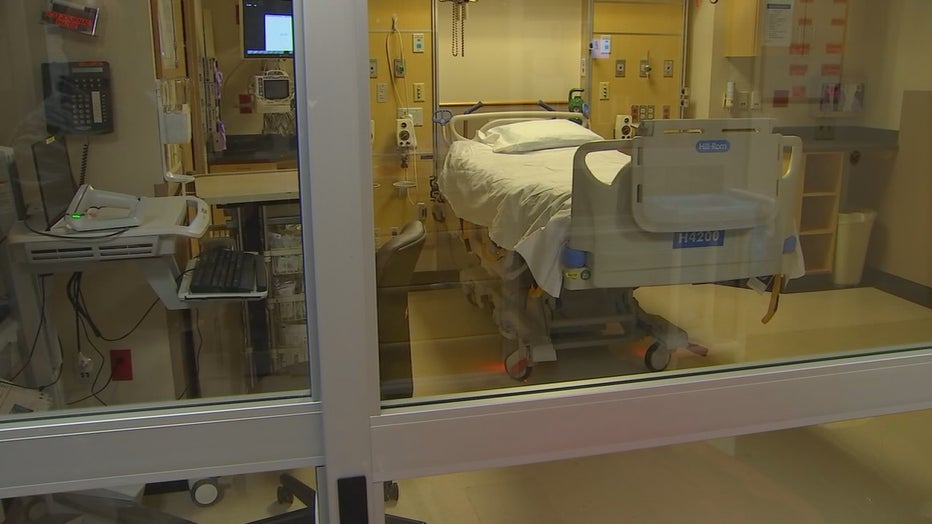 The number of hospital patients includes 1,693 people in intensive care due to COVID, also a slight drop from Monday, but still a dangerously elevated figure, given the county has only about 2,500 licensed ICU beds.

Health officials have warned in recent weeks that despite a leveling-off of hospital admissions, the numbers could rapidly climb again when people infected over the Christmas and New Year's holidays begin to get sick enough to require medical care.

Making matters potentially worse was news over the weekend that the county had confirmed the first local case of a variant strain of the virus that was first detected in the United Kingdom. That strain, known as B.1.1.7, is not considered more deadly, but it is far more contagious, passing easily from person to person and having the potential to spread rapidly among the population.

And on Monday night, officials at Cedars-Sinai Medical Center announced they have identified yet another strain of the virus, known as CAL.20C, in more than one-third of the COVID patients being treated at the hospital.

The strain was also found in about one-fourth of samples from COVID patients across Southern California.

But Cedars researchers said the strain is partly responsible for the large surge in cases the county has experienced over the last two months. Hospital officials said the strain was virtually non-existent in the county in October, but by December represented 36.4% of COVID cases at Cedars-Sinai and 24% of COVID samples collected across Southern California.

The strain has also been detected in patients in Northern California, New York, Washington, D.C., and abroad in Oceania, according to Cedars-Sinai.

Los Angeles County crossed the 1 million mark in cumulative cases during the pandemic over the weekend. Although that milestone represents about one-tenth of the county's overall population, modeling released last week estimated that as many as one-third of residents have actually been infected at some point, with many of them never knowing it but still capable of spreading the virus to others.

Increasing fatalities due to the virus prompted a grim move on Sunday by Southland air-quality regulators, who lifted the cap on the number of bodies local crematories could cremate.

Crematoriums normally operate under a limit designed to reduce the impact of the cremations on air quality.