Initially, the mask mandate was scheduled to be reimposed on Friday, July 29 but positive case rates, hospitalizations and deaths related to COVID-19 have been leveling off and trending downward in LA County.

Public Health Director Barbara Ferrer said during a COVID-19- briefing Thursday that the county's average daily number of new COVID cases over the past week was about 5,900 per day, down from 6,750 a week ago. There were 1,239 COVID-positive patients hospitalized as of Thursday, down from 1,329 a week ago.

She also noted that the average daily rate of people testing positive for the virus has been holding mostly steady.

According to Ferrer, new infection numbers have been declining steadily this week, "potentially signaling a downward trend in cases." She said hospitalizations have also begun declining "for the first time since mid- April."

Declines in new cases and hospitalizations will likely also lead to declining virus-related deaths, she said.

Earlier this week, Ferrer told the county's Board of Supervisors that if the hospital admission rate of new COVID patients falls near the rate of 10 per 100,000 residents, it would "trigger a reassessment on the need to re-implement an indoor masking mandate."

Officials said they are relieved to see a decline from last week's average. Additionally, they said the average daily rate of cases has been in a fairly steady decline since July 23, potentially signaling a downward trend in cases. 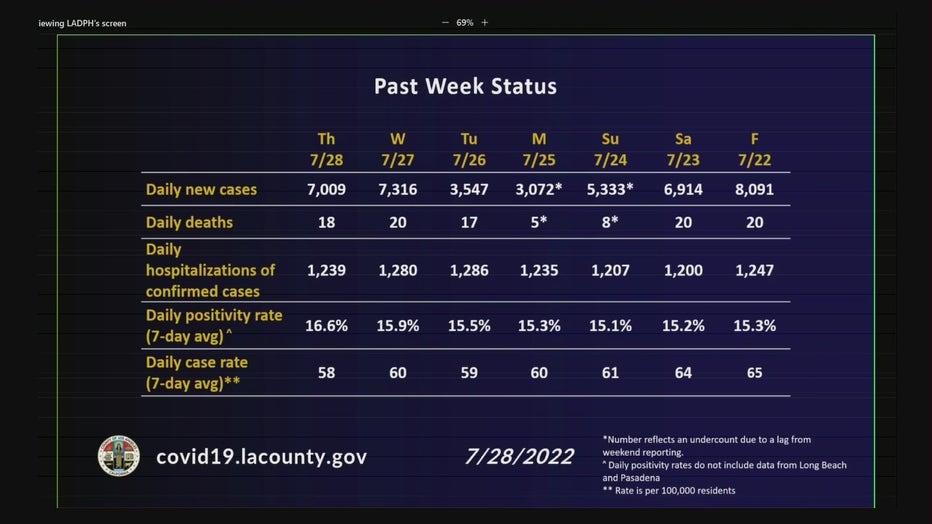 Los Angeles County moved into the U.S. Centers for Disease Control and Prevention's "high" level of COVID-19 community activity earlier this month, when the average daily rate of virus-related hospital admissions rose to 10.5 per 100,000 residents, surpassing the threshold of 10 per 100,000. Several other California counties are in the "high" category, but LA County was the only considering a mask mandate. 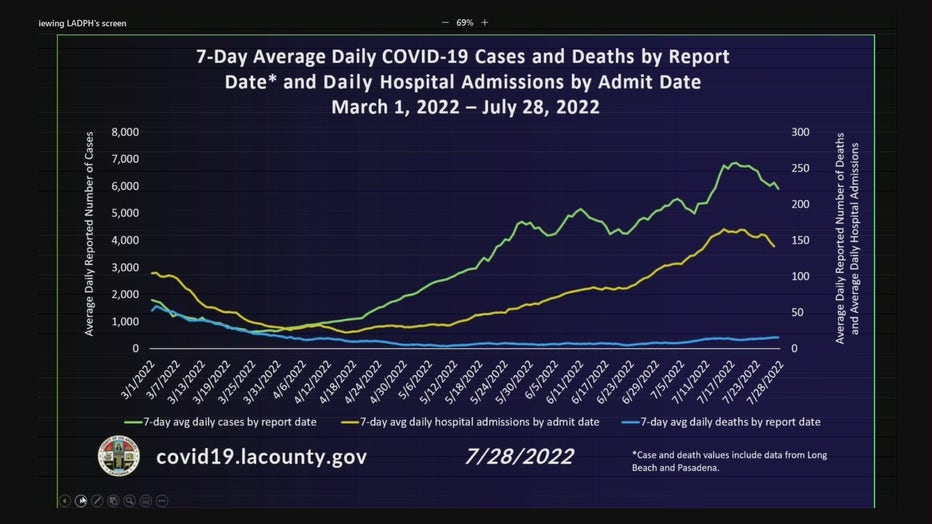 If the county imposed the universal mandate, it would spread the requirement to all indoor public spaces, including shared office spaces, manufacturing facilities, retail stores, indoor events, indoor restaurants and bars and schools.

As of Thursday afternoon, the CDC still put the county's rate of COVID hospital admissions at 11.5 per 100,000, Ferrer said, but those figures only took into account numbers through Monday. The county, however, examined the numbers through Wednesday, which put the rate at 9.7 per 100,000 -- enough to move the county back into the "medium" virus activity level.

Ferrer said that figure is "a good reason not to move forward" with an indoor masking mandate, even though it's likely the county will officially remain in the CDC's "high" category for at least another week.