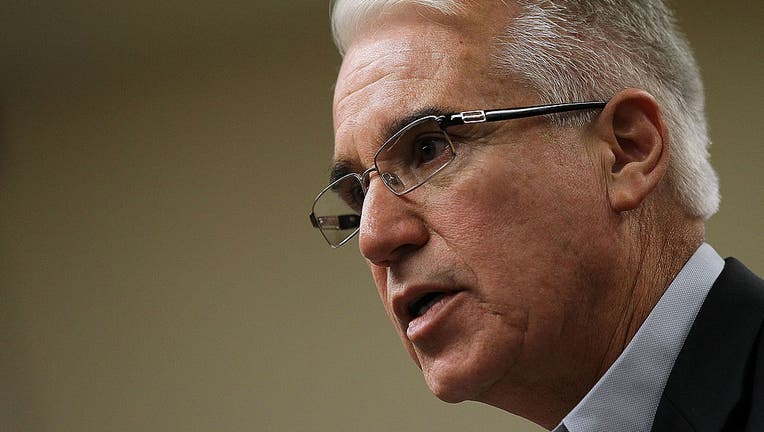 LOS ANGELES - Los Angeles County District Attorney George Gascón -- who issued a directive barring prosecutors from seeking the death penalty in any new murder cases upon taking office last month -- announced Tuesday that he supports a measure that would ban the death penalty in federal cases.

The county's top prosecutor said in a written statement that he "wholeheartedly" supports legislation to be re-introduced by Rep. Ayanna Pressley, D-Mass., and incoming Senate Judiciary Chairman Richard Durbin, D-Illinois, to prohibit the use of the death penalty at the federal level and to require re-sentencing for those who are currently on death row in such cases.

"State or federal sanctioned killings do not deter crime and have historically been racially biased," Gascón said. "Together, we can end this inhumane and misguided form of punishment and continue to make essential reforms to our criminal justice system that will enhance safety and justice."

On the day he was sworn into office Dec. 7, Gascón issued a series of directives -- one of which reads that "a sentence of death is never an appropriate resolution in any case."

He noted in the directive that there are 215 people -- 85% being "people of color" -- on death row in California as a result of being prosecuted in Los Angeles County.

Gascón has come under fire from some families of crime victims for the new directives.

A group called Victims of Violent Crime For The Recall of George Gascón announced that it has filed formal documents that allows the organization to accept donations to prepare for the effort to try to oust him from office. The group said it may be the first-ever recall effort involving a Los Angeles County district attorney.

Gascón -- who campaigned on criminal justice reform -- has said he has a "mandate from the public." He said last month that those who commit crimes will be held accountable and accused opponents of "fear mongering."

On Monday, Sacramento County District Attorney Anne Marie Schubert sent a letter to Gascón in which she criticized many of his special directives as "illegal and unconstitutional" and informed him that her office will no longer grant him jurisdiction over any crimes that involve Sacramento County.

"Your special directives are not just extreme but will undoubtedly wreak havoc on crime victims and their Constitutional rights," she wrote. "Your lack of concern for their rights and safety concerns me greatly. Additionally, because crime has no boundaries, these special directives will have far greater impact than on Los Angeles County alone. Rather, victims across California will be negatively impacted and the safety of all Californians will be jeopardized."

Stephan wrote in a letter that her office had agreed to allow the Los Angeles County District Attorney's Office to prosecute Rhett Nelson for the San Diego robberies with the understanding that he would face life in prison without the possibility of parole if he was convicted. She noted that Nelson could otherwise be eligible for parole as early as age 50 if sentencing allegations against him were dismissed -- as requested by the Los Angeles County District Attorney's Office as a result of one of the new directives.

Judge Jose Sandoval subsequently rejected the prosecution's bid under the directive to dismiss the sentencing allegations.

In a statement released Friday, the L.A. County District Attorney's Office said Stephan's decision would unnecessarily subject the victims' families to two trials, and said it was highly unlikely Nelson would ever be granted parole.

"The defendant in this case is 31 years old and was facing nearly 70 years to life in state prison. As a result of this move by D.A. Stephan, the defendant now faces 50 years to life in state prison on his L.A. case, and possibly more if found guilty in his San Diego case," the statement reads. "We question the wisdom of dragging these families through two separate cases, and with the parole board only granting release in about 15% of cases it hears, the suggestion that this individual would get out, let alone re-offend, (strains) credulity. What's guaranteed is that two cases will cost taxpayers more than one."