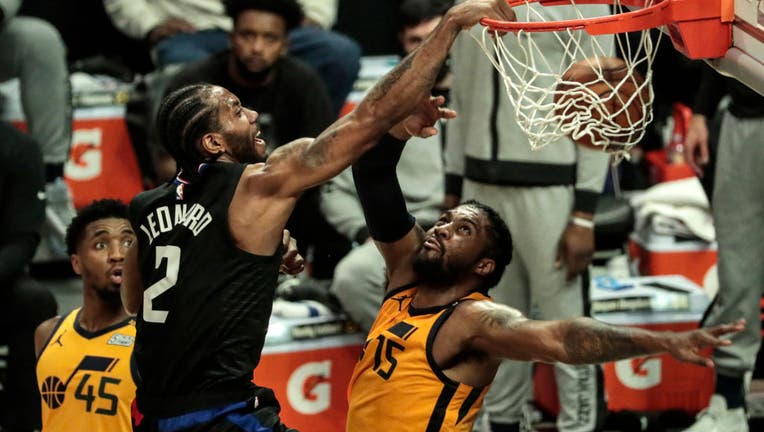 LOS ANGELES - Are the Los Angeles Clippers cursed? In the fight to reach the NBA Finals, the team has faced a major setback.

On Wednesday night, the Clippers will have to continue in their battle to reach the Western Conference Finals without their leader, forward Kawhi Leonard. He will miss Game 5 due to a right knee strain and may have possibly injured his ACL. Leonard will likely miss the rest of the Western Conference semifinals against the Utah Jazz, The Athletic reported.

Leonard showed signs of a possible injury in the fourth quarter of Monday night’s game as the Clippers were able to tie up the series 2-2.

It was later confirmed he suffered a right knee strain and will be out indefinitely.

The injury appeared to occur with about 5:20 left in Game 4 of the series against Utah on Monday night, when he was fouled on a drive by Utah’s Bojan Bogdanovic. Leonard was dribbling into the lane when he was bumped, and his right knee appeared to buckle slightly. He grimaced in some discomfort, missed the two free throws that were awarded following the foul, but remained in the game for 45 more seconds.

He checked out with 4:35 remaining and did not return; the Clippers led by 16 points when he checked out and the lead remained in double figures the rest of the way.

When asked about his injury in a postgame interview, Leonard said it was nothing to worry about.

Leonard is averaging 30.4 points on 57% shooting in the playoffs. On Tuesday, he was selected as part of the 2020-21 NBA All-NBA first-team as well as the NBA's Defensive Second Team.

The two-time NBA Finals MVP has been a force on both sides of the court and now, head coach Ty Lue will have to find offensive and defensive solutions in Leonard’s absence.

Fellow superstar, Paul George, has been excellent and will have to step up, even more, to lead LA's remaining NBA team to the next round.

Los Angeles has a deep roster and its role players have been outstanding. It is unclear who Lue will start in Leonard's place.

The LA Clippers have yet to reach the NBA Finals or Western Conference Finals in franchise history.

Even former Clipper, point guard Chris Paul, who has been remarkable leading the Phoenix Suns, may miss a portion of the Western Conference Finals after entering COVID-19 protocols. It is unclear when he'll return.

Los Angeles has come under fire in recent years because of the need to load manage. Leonard's deal reportedly involves load management to prevent aggravating a previous knee injury.

This postseason has been brutal for many NBA all-stars.

The Los Angeles Lakers were eliminated from the first round of the NBA playoffs after forward Anthony Davis suffered a groin injury in Game 4 against the Phoenix Suns.

Brooklyn's Kevin Durant had a historic game Tuesday night, scoring 49 points in a masterful performance as the Nets beat the Milwaukee Bucks 114-108. James Harden continues to battle a hamstring injury and only managed to score 5 points. Meanwhile, Kyrie Irving was out of the mix after suffering an ankle injury in Game 4.

Sixers star Joel Embiid has been listed as questionable for every game of the Eastern Conference semifinals due to a knee injury.

Jaylen Brown, Donovan Mitchell, and Mike Conley have also been forced to sit throughout the playoffs due to their individual injuries.