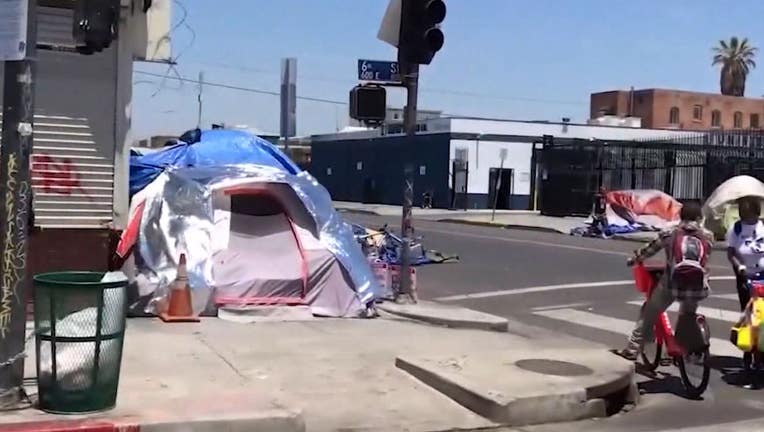 LOS ANGELES - The city and county of Los Angeles filed an emergency request Wednesday to a federal appeals court to place a hold on a judge's order that all indigent persons in the Skid Row area must be offered shelter within six months.

Calling the housing order "procedurally defective and legally erroneous,'' attorneys for the city and county argue that such a decree violates the constitutional separation of powers by usurping the role of local government.

"The district court has disregarded the limits of its power, second-guessed voter-endorsed initiatives, and substituted its judgment for the judgment of elected officials and policy experts, and has created disruption, displacement, and confusion,'' according to the emergency motion for a stay pending appeal lodged with the U.S. 9th Circuit Court of Appeals.

U.S. District Judge David O. Carter's mandatory order last week set a timetable for offers of shelter to be made to about 2,000 homeless people living on the streets of Skid Row during the next 120 days.

The sprawling 50-block area just blocks from Staples Center contains one of the largest populations of indigent people in the nation. Carter wrote in his order that Skid Row was a decades-old byproduct of systemic racism that left Black people -- especially Black women -- "effectively abandoned on the streets. Such governmental inertia has affected not only Black Angelenos, not only homeless Angelenos, but all Angelenos -- of every race, gender identity, and social class.''

Attorney Skip Miller, who represents the county, said Wednesday that the judge's mandate "not only violates the separation of constitutional powers, it will not solve homelessness in the region and instead lead to criminalizing it, undermining the trust and faith the county has worked long and hard to establish with people living in the streets.''

Carter's action stems from a lawsuit filed last year by the L.A. Alliance for Human Rights, a group of downtown business owners and homeless residents, which sued the city and county to try and force a resolution to the increasing numbers of people living on the streets.

During more than a dozen federal court hearings, the lawsuit has become bogged down in bureaucratic snarls between the city and county, prompting Carter to deploy the power of the federal court to speed up efforts to get city sidewalks cleared and place homeless people into housing.

L.A. Alliance lawyers have written that Skid Row is a "catastrophe created by the city and county'' in which the city adopted a policy of "physical containment'' in which the poor, disabled and mentally ill would be "contained'' inside the delineated borders of downtown.

A decision by the appeals panel on the motion for a stay pending appeal is requested by Monday.

"The deadlines in the injunction have already started running and the county has already had to respond to the district court's inquiries,'' city/county attorneys wrote. "As set forth in the motion, the county would need to start making fundamental changes to its homeless services and related resources immediately if forced to comply with the terms of the district court's order.''

In response to the county's request to hit pause on Carter's timetable, the judge reiterated his intention to keep the order in place and added new directives. The Santa Ana-based judge set a May 27 evidentiary hearing on "structural racism'' and "what (city and county) properties are available for homelessness relief.''

The court added an admonition that without a global settlement of the suit, the housing deadlines would remain in place.