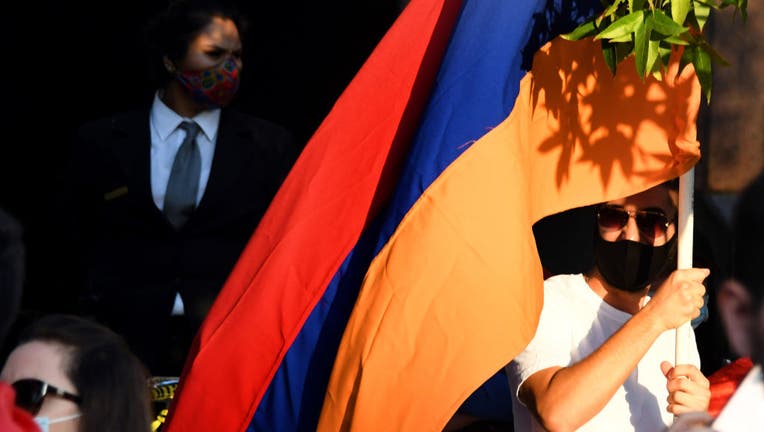 LOS ANGELES, CA - SEPTEMBER 30: Protestors wives a flag in front of a security officer outside the Azerbaijani Consulate General during a protest against Azerbaijan's aggression against Armenia and Artsakh by the Armenian Youth Federation on Wednesda

Krekorian, who authored the letter to the firm wrote “Our outrage is particularly acute right now, because the military forces of Azerbaijan have launched a full scale surprise attack against the ethnically Armenian people of the Republic of Artsakh. That ongoing aggression was fully orchestrated with your client, the Republic of Turkey, which had transferred thousands of extremists Jihadist militants from the battlefields of Syria and Libya into the Caucasus to support the slaughter of Armenians.”

In the letter, Krekorian noted that Mercury provides a substantial amount of strategic, political and/or public relations advice to the Republic of Turkey.

California State Senator Anthony Portantino also sent a letter to Mercury urging them to cancel their business contract with Turkey.

“It was important to immediately communicate with Mercury’s representatives in California that it is unacceptable for its Washington office to help further Turkey’s ambitions. It is a painful reminder of past atrocities and underscores a lack of sensitivity toward the current violence against the peaceful people of Artsakh,” Senator Portantino stated.

According to Mercury’s website they are a high-stakes public strategy firm. Providing “results for the world’s most successful companies, leading advocacy groups, governments, political parties, NGOs, and prominent public and political figures.”

According to the Armenian National Committee of America-Western Region, Portantino, sent a letter to Secretary of State Michael Pompeo condemning Azerbaijan’s aggression towards Artsakh.

Pompeo is expected to meet with Armenian Foreign Minister Zohrab Mnatsaknayan on Friday in Washington D.C.

The Armenian-American community is calling on President Trump and his administration to stop the genocide against Christian Armenians, sanction Turkey and Azerbaijan and stop funding Azeri war crimes with US tax dollars.
All this in response to the ongoing war between Armenia and Azerbaijan over the region of Artsakh.