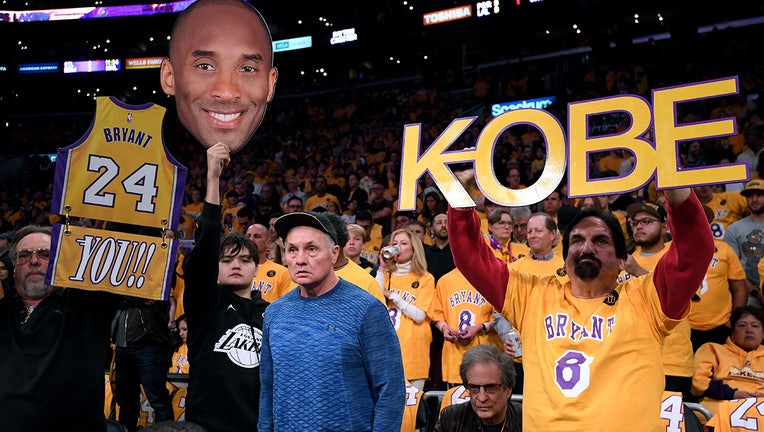 LOS ANGELES - Kobe Bryant Day is a day dedicated to celebrating the legendary Los Angeles Laker who is one of the biggest sports icons in history. The day happens to follow his birthday and it’s held on Aug. 24 (8/24) each year in Los Angeles and across to globe in honor of his two jersey numbers to commemorate his legacy.

"Kobe Bryant's life, like each one of us who ever lived, present moments to celebrate and to condemn," OC Supervisor Don Wagner said following the vote. "Kobe, like all of us, faced challenges, challenges of his own making and challenges thrown at him by life, that he overcome. Today, we celebrate the effort in overcoming those challenges."

Bryant became the first player in NBA history to have two jersey numbers retired by the same team in 2017. 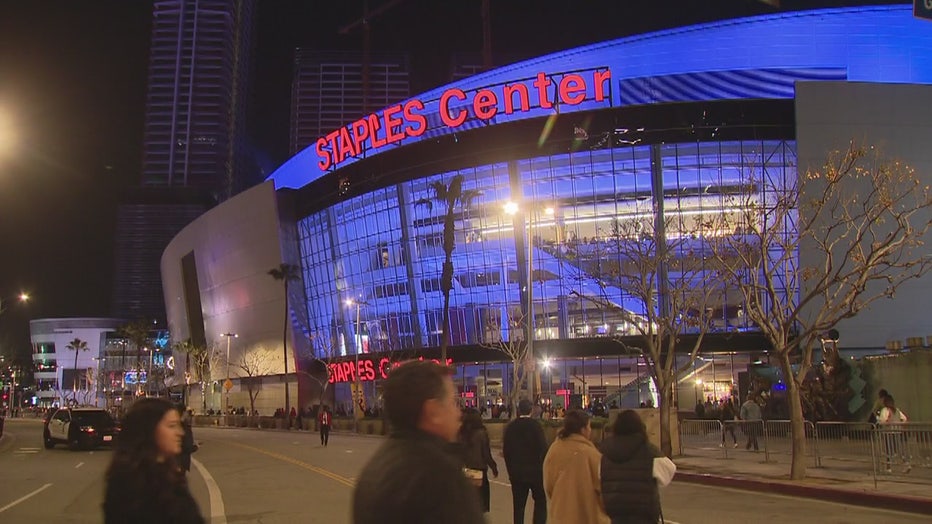 For every Lakers home game played at Staples Center, each and every player in the NBA, coach, arena employee, and spectator can look up into the rafters and are reminded Staples Center is known as the "House Kobe Built."

Kobe Bryant, also known as "Black Mamba" poured his blood, sweat, and tears in his 20 years with the franchise—17 of which were years the Lakers called Staples Center home.

In 2020, it was announced a portion of Figueroa Street outside the arena would be renamed Kobe Bryant Boulevard.

Coined by Los Angeles sports icon, "Mamba Mentality," is a mindset that has resonated with and inspired generations of athletes.

In 2020, the Lakers won an NBA championship in the NBA Bubble without fans in an unprecedented season that included Bryant’s heartbreaking death, the start of the coronavirus pandemic, and a social justice moment.

After being eliminated in the first round of the NBA playoffs by the Phoenix Suns in the 2020-21 season, the Los Angeles Lakers made plenty of moves this offseason that add depth and experience to a roster that includes the dynamic duo that is LeBron James and Anthony Davis. Some of the NBA veterans on the Lakers roster were not only influenced by the legendary Laker, but some even had a chance to play against him or alongside him. 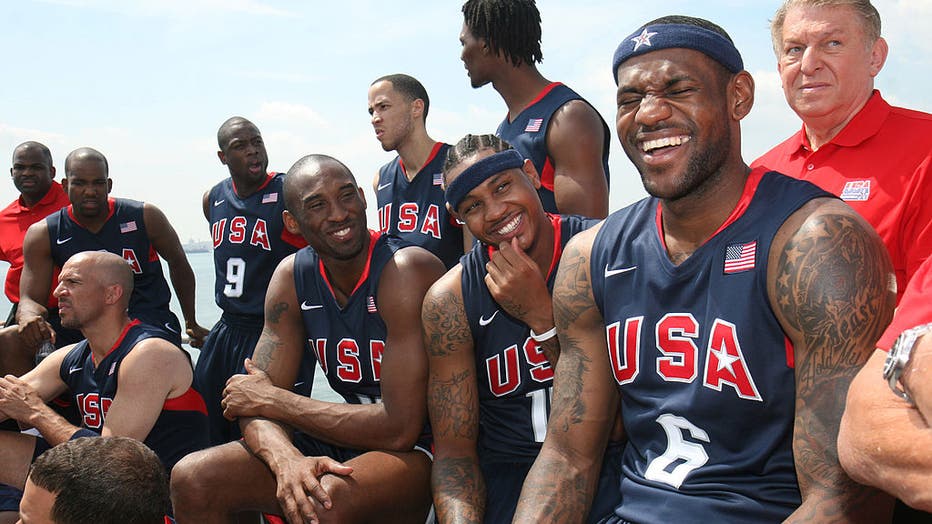 On Kobe Bryant Day, we reflect on how his legacy lives on through the men in purple in gold on the current Lakers roster. 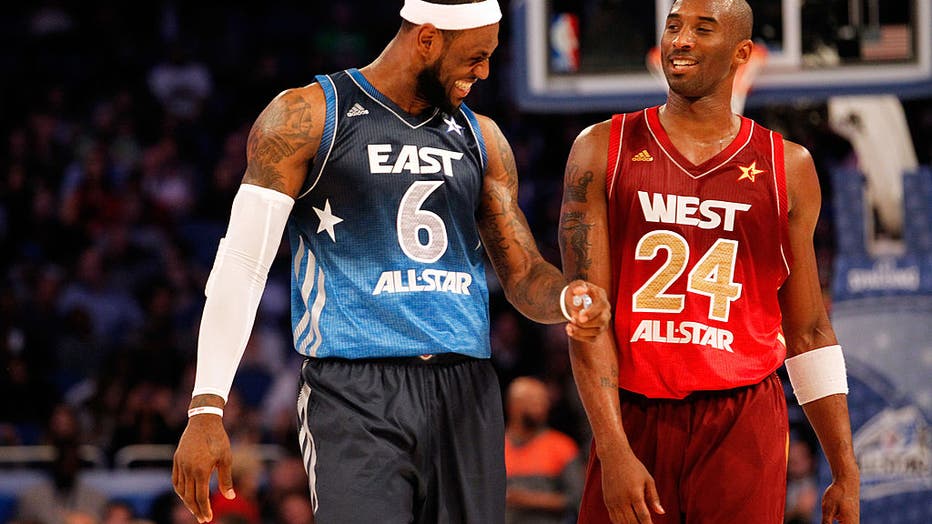 Kobe Bryant and LeBron James are arguably two faces that belong on the Mt. Rushmore of the NBA.

Before he made the big move to the City of Angels as a Laker, LeBron James played two tenures with the Cleveland Cavaliers and one with the Miami Heat.

Although they were rivals on the court, "King James" and "Black Mamba" were said to be longtime friends. Bryant was entering his eighth season when LeBron James was selected first overall in the 2003 NBA draft by the Cavaliers.  Though they were never teammates and would never face one another in the postseason, they won two Olympic gold medals together in 2008 and 2012.

Bryant’s final tweet honored James as he congratulated him on surpassing him as third on the NBA’s All-Time list in career points.

In an emotional tribute following Bryant’s tragic death, James said in part: "I’ll continue your legacy man! You mean so much to us all here especially Laker Nation and it’s my responsibility to put this [expletive] on my back and keep it going."

Months later, the Lakers won an NBA championship in a season dedicated to honoring Kobe Bryant.

"I’m able to wear the 24 on my finger every night and then playing in Staples Center you see that 8 and 24 in the rafters and to be able to just live his legacy on. There's a lot of things that die in this world but legends never die and he’s exactly that," James said in a press conference earlier this year that was posted by Lakers Nation.

Carmelo Anthony: "Our friendship and relationship was deeper than basketball" 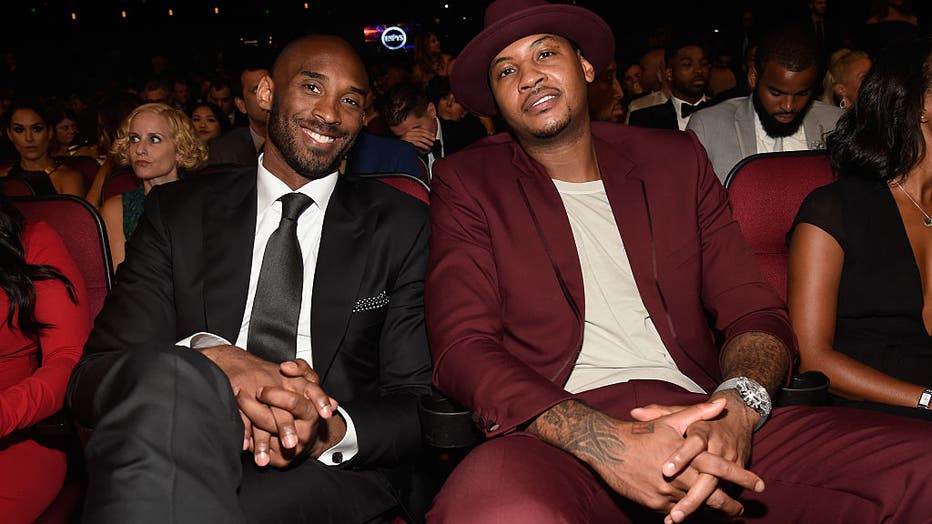 In the 2021 offseason, Carmelo Anthony left Damian "Dame Time" Lillard and Portland behind to sign a one-year deal with the Lakers.

"I try to think about it, I try to process it, I know what it means to wear purple and gold just from the history of the game and just following and competing against it and really understanding the true essence of what it means to be a Laker... But never have I thought that I would be wearing purple and gold. Especially at this point in time of my career, but hey, everything happens for a reason, and I believe that," he said in a Spectrum Sportsnet interview.

During his time with the Trail Blazers, Carmelo Anthony and his teammates were faced with an agonizing task in early 2020—they would play the Lakers at Staples Center in their first home game since Bryant’s death.

"Honestly knowing him the way that I know him, he would’ve wanted me to play" Anthony said in an emotional interview following that game. "Our friendship [and] relationship was deeper than basketball. It was family, it was friendship. Basketball was the last piece of connective tissue between us two."

His wife, La La Anthony is best friend with Vanessa Bryant and has played a crucial role in supporting the Bryant family since losing Kobe and Gianna. La La, along with singer Ciara, are often seen with Vanessa and her girls in social media posts.

Anthony Davis and Mamba formed a close relationship after competing together at the 2012 Olympics. Davis was only 19 during the London games.

Following Bryant’s passing, AD wrote on Instagram that Mamba was "the first guy to put me under your wing and show me the ins and outs of the league."

Trevor Ariza: "Kobe was the one who totally changed my perspective of the game"

Trevor Ariza is back on the Lakers roster.

The Los Angeles native graduated from Westchester Enriched Sciences Magnets. Once he entered the NBA, Ariza was teammates with Bryant from 2007-09. In those years, Ariza said in an interview with ESPN that Bryant changed his perspective of the game.

"Everything small or big, it all mattered the same to him. His attention to detail was what separated him. You can be a great athlete, a great scorer, but what if you are playing hurt and can't get to the spot you normally like to operate from? Kobe's the one that showed me how to pay attention to angles, to footwork, to the nuances that can take you a long way in situations like that. He broke down the game differently than anyone I've ever seen," he said.

Ariza is the only person on the Lakers roster who was able to play with Bryant on a championship team, ESPN reported.

People mourn in different ways and for some, grappling with Bryant's death remains difficult. 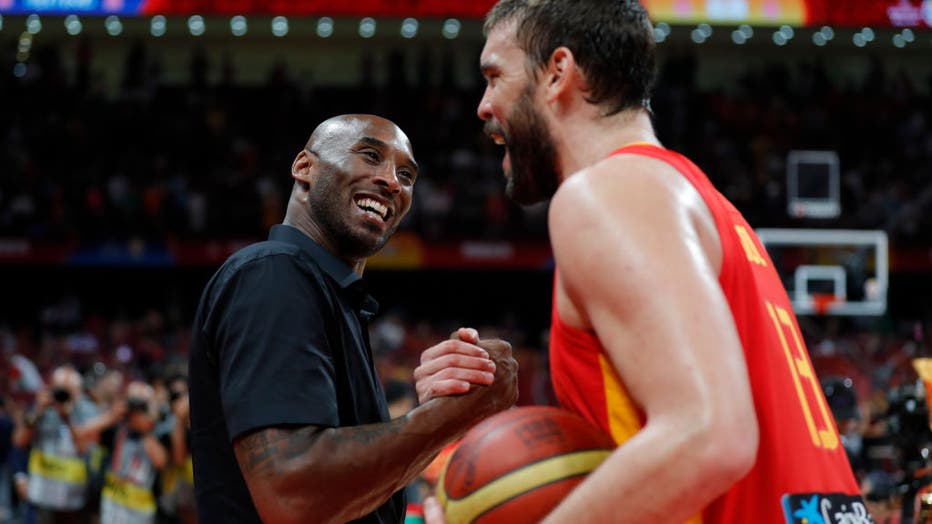 Marc Gasol, the younger brother of Pau Gasol, has not been as vocal about his connection to Bryant as some of his teammates. In fact, he has yet to publicly comment and has admitted that it remains too difficult of a topic to discuss.

Dwight Howard will suit up in purple and gold for the third time in his career.

It wasn’t exactly smooth sailing between Kobe and Dwight Howard when they played together in 2012-13. 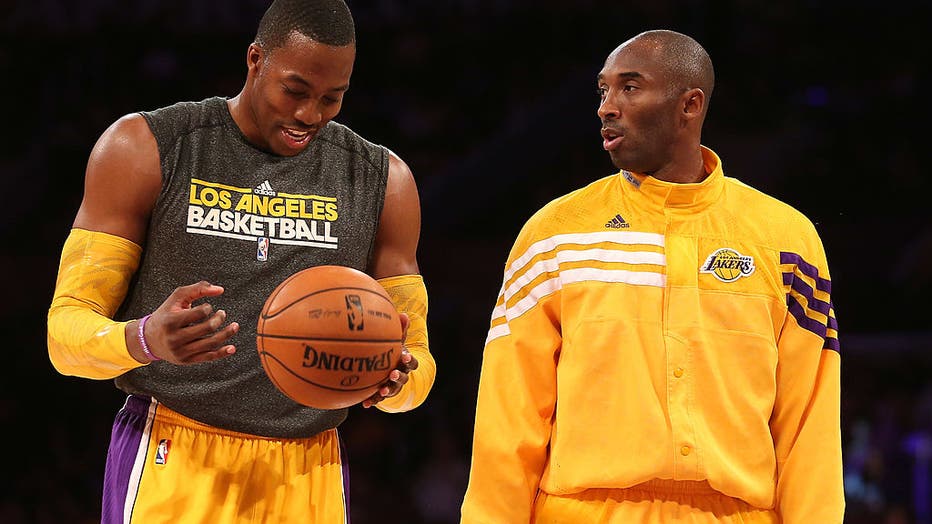 "It was really hard for me and Kobe to really communicate. I think we were just at two different mental stages," he said an Instagram Live interview with Jared Dudley, as reported by FanNation.

Years later, the two would make amends. Bryant was even supposed part of Howard’s show during the dunk contest at the 2020 NBA All-Star game in Chicago.

On the "Daddy Issues with Joe Buck and Oliver Hudson" podcast, Jeanie Buss revealed she consulted with Bryant before signing Howard ahead of the 2019-20 season.

"Kobe wanted us to win. He wanted to see the Lakers win, and Kobe came to a couple games and he was happy to see Dwight, and greeted him."

Los Angeles native and All-Star guard Russell Westbrook is fulfilling his lifelong dream of playing for the Lakers.

As icing on the cake, Kobe Bryant said in a 2016 interview with Jim Rome that Westbrook was the player that reminded him most of himself.

"When I turn on the TV and I watch players play, the player that plays with the same kind of emotion and grit and competitive intensity is Russell [Westbrook]," Bryant said at the time. "Russell is going hard. Doesn’t matter who he is playing against, doesn’t matter what the odds are, he’s going, that’s a guy, he is going 110 percent every single time."

Westbrook and Bryant had a close bond off the court and their conversations are what Westbrook said he'll remember most.

"We began to have a better relationship off the floor as brothers and talking about other things other than basketball and things that we can do with game and to me that is the most important thing I’ve been able to cherish from Kobe," Westbrook said.

Lakers executive Rob Pelinka also commented on the connection when Westbrook was introduced to Laker Nation.

"I remember the year- I still have his voice in my head, the year that Russell broke the record that no one thought would ever be broken in terms of average a triple-double and putting himself on the category of players like the Big O [Oscar Robertson]…there were a small handful of players around the NBA that Kobe really felt like embodied that Mamba Mentality and I remember throughout that year, just his praise for Russell’s approach and him talking about that competitive edge that is rare in sports across all sports," Lakers executive Rob Pelinka said.

While the Los Angeles Lakers introduced Russell Westbrook on Tuesday, the NBA All-Star and Rob Pelinka discussed his connection to the legendary Kobe Bryant.

The Lakers will be fighting for the franchise's 18th NBA championship this upcoming season. This 75th NBA season begins Oct. 19. That night, the Lakers are scheduled to open their season against the Golden State Warriors at Staples Center.

Whether diehard Laker fans want to accept it or not, there is another NBA team in Los Angeles that also calls Staples Center home. The rivalry between the two has become more heated in recent years, especially after the Clippers signed Kawhi Leonard and Paul George.

So, what does this have to do with Lakers legend, Kobe Bryant?

For one, his father Joe Bryant played for the San Diego Clippers.

After Bryant retired from the NBA, he mentored some of the biggest names in the NBA including Clippers superstar, Kawhi Leonard.

In 2020, Leonard became the first recipient of the NBA All-Star Game Kobe Bryant MVP Award that was renamed in his honor.

"It means a lot to me. Words can’t even explain…I want to thank Kobe for everything he’s done for me. All the long talks and workouts…this one’s for him," the soft-spoken Los Angeles native said following the 2020 All-Star game.

"He was my Michael Jordan growing up as a SoCal kid. He was what everybody wanted to be. I started playing basketball because of Kobe," he told the LA Times’ Andrew Greif.

George also said Mamba inspired him to play hard on both ends of the floor.

"I’m grateful to have someone like you to look up to growing up in Cali. You inspired me to play basketball and to dominate on both ends. You made it cool to play defense and bust someone’s [expletive] on offense. Thank you for taking me under your wing and being in my corner," he wrote in a heartfelt Instagram post.

From the Lakers, to the Clippers, to many big names in the NBA and beyond, Kobe's influence is undeniable and his legacy lives on through the millions of lives he inspired.