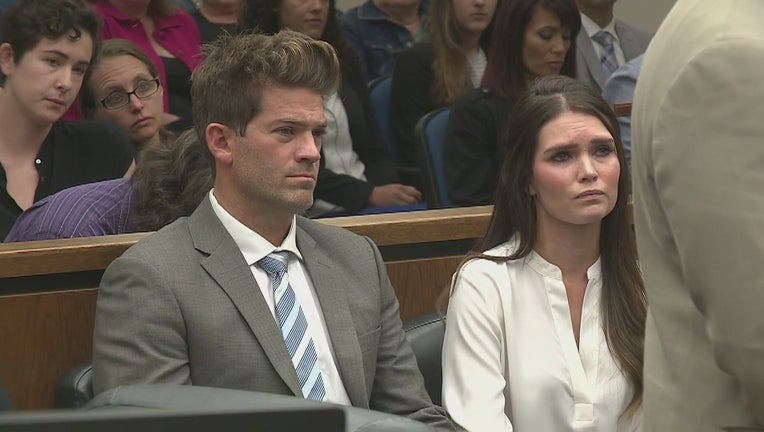 NEWPORT BEACH, Calif. - An Orange County Superior Court judge granted a motion by prosecutors to dismiss charges related to two alleged rape victims in the case against a Newport Beach hand surgeon and his girlfriend, who are accused in drugging and sexually assaulting several women.

Prosecutors from the Attorney General's Office have said previously they wanted to chip down charges to one alleged victim in the case against Dr. Grant Robicheaux, 40, and Cerissa Laura Riley, 34. Robicheaux was charged initially with seven alleged victims and Riley with five.

Prosecutors from the state Attorney General's Office told an Orange County Superior Court judge Friday that they don't believe they can prove most of the rape charges against a Newport Beach hand surgeon and his girlfriend. (May 14, 2021)

Bromberg noted that a declaration from investigator Jennifer Doss on why two of the women wanted out of the case was "sparse, nevertheless, it is adequate and to the point. After 2 1/2 years, these ladies are entitled to leave this case if they so wish.''

Bromberg granted the prosecutors' motion to dismiss charges related to two of the women, but "defers'' on ruling on the other woman at this time. Doss said in court papers that after March 24, that woman -- referred to as Jane Doe 2 – "stated she wanted to think about it,'' and that Doss left
her a voicemail, but it wasn't returned, so prosecutors assumed she wanted out of the case, according to Bromberg's ruling. The judge said there were "too many unanswered questions'' about why Jane Doe 2 did not respond to prosecutors.

Bromberg told prosecutors they must "use due diligence at the highest level and attempt to contact Jane Doe 2 once again to determine if Jane Doe 2 truly wishes to no longer participate in the present case.'' He also ordered prosecutors to file a declaration under seal explaining why she no longer wants to be in the case.

The judge said he would rule on prosecutors' motion "to amend the complaint and to dismiss all counts as to Jane Doe 2, 1 and 7'' at the next court hearing, which has yet to be scheduled.

At the last hearing, in June, attorney Matt Murphy told Bromberg that he was representing a new client in the case, a potential eighth victim, however.

The case has gone through multiple unusual gyrations since it was filed in 2018. It became a flashpoint in the election between Spitzer and former Orange County District Attorney Tony Rackauckas, who Spitzer unseated. Spitzer ordered an extensive review of the case and assigned two new prosecutors to it before deciding he would dump all of the charges against the pair.

Murphy, who represents several of the victims, and attorney Michael Fell, who represents one of the alleged victims, objected and Orange County Superior Court Judge Gregory W. Jones denied the motion to dismiss the case and handed off the prosecution to the Attorney General's Office in August, citing the politics involved between Spitzer and Rackauckas as one of the main reasons.

District Attorney's Office investigator Jennifer Kearns, who was removed from the case, has filed a whistleblower lawsuit against the county, alleging she was retaliated against.