SANTA ANA, Calif. (KTTV/CNS) - Prosecutors from the state Attorney General's Office told an Orange County Superior Court judge Friday that they don't believe they can prove most of the rape charges against a Newport Beach hand surgeon and his girlfriend and want to amend the complaint against the pair to include just one sexual assault case involving one of the seven charged victims.

Orange County Superior Court Judge Steven Bromberg told the prosecutors to file a document under seal offering more explanation as to why they believe they do not have enough evidence to proceed on most of the charges against Dr. Grant Robicheaux, 40, and Cerissa Laura Riley, 34. 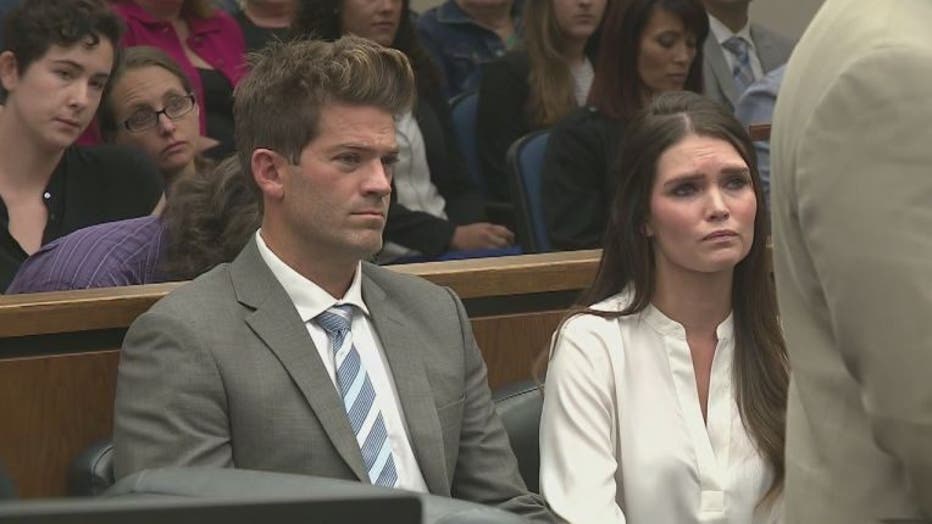 The couple is accused of drugging and luring of several women to their Newport Beach home to assault them sexually, according to charges. Seven women were named in the initial complaint, which began over two years ago with then-Orange County DA Tony Rackaukas, who described the pair as vicious sexual predators who used their good lucks and money to take advantage of vulnerable women.

Bromberg indicated that there are two options aside from allowing prosecutors to gut the case, which include going forward with a preliminary hearing or assigning a new special prosecutor.

Bromberg has characterized the case as "the never-ending story'' as it has gone through a unique legal journey that started with Rackauckas filing the case and claiming he had video evidence of the alleged assaults. The case happened during a campaign for reelection that he lost to current DA Todd Spitzer, who is accusing him of mishandling the case. Then, after Spitzer took office, he ordered a review of the case and reassigned it to two new prosecutors, and then decided to try to dump it altogether.

Robicheaux and Riley have pled not guilty to all charges, saying the sex was consensual.

Orange County Superior Court Judge Greg Jones last June denied Spitzer's motion to toss the case and removed his office as the prosecuting agency and assigned it to the Attorney General's Office.

Defense attorney Philip Cohen had a "soft objection'' to Bromberg continuing the case and also argued that the judge does not have the discretion to reject the Attorney General's request to amend the complaint. Bromberg disagreed.

The judge quizzed Deputy Attorney General Yvette Martinez about the rationale in wanting to kick most of the drugging and rape charges and reduce felony drug counts to misdemeanor possession.

Bromberg said several times that he was "boxing at shadows'' and needed more information from prosecutors.

Martinez elected to keep one charge, for victim Jane Doe 6. The attorney of one of the victims, not clear if it was on behalf of Jane Doe 6, was in court Friday, saying his client is ready, willing, and very much wanting to testify.

There is an eighth reputed victim whose allegations are not included in the charges, but would theoretically be used during trial to enhance an argument of a pattern.

Martinez said it wasn't a question of whether her team believes the accusers, but rather it comes down to a determination that they believe they do not have enough evidence to prove their case.

Martinez said her team included four attorneys and two case agents and that it was a "unanimous'' decision to amend the complaint to reduce charges. The prosecutors had three or four conversations with newly appointed Attorney General Rob Bonta, who signed off on the decision, she said.

Bromberg noted that the Orange County District Attorney's Office has a specialized unit focusing on sex crimes, something the Attorney General's Office lacks. But Martinez said she has handled sex cases in the past as a state prosecutor for 15 years, and another member of the team, James Toohey, said he handled sex cases as an attorney in the military.

Bromberg said the motion to amend the complaint was "generic'' and he wanted more details as to why prosecutors have concluded they don't have enough evidence to go forward with the original complaint.

"We were working on a very short timeline'' and "had less than three weeks to brief'' Attorney General Rob Bonta, Martinez said to explain why the motion lacked more details.

Martinez said she wanted to avoid victim blaming, but noted that two of the accusers would not speak to her legal team.

Bromberg asked "what has changed'' since the Attorney General's Office resisted an appeal of Jones' ruling, which was rejected by the state Supreme Court. Martinez argued that "an indication this is a politically charged decision is completely unfounded... We believe these are the charges supported by the evidence.''

Martinez assured Bromberg, "We have no reason (to think) that any of these victims are being untruthful.''

Tempers flared at times after Bromberg said two of the prosecutors from the Orange County District Attorney's Office who sought to dismiss the entire complaint had marching orders.

Cohen objected to the characterization involving Deputy District Attorneys Rick Zimmer and Karyn Stokke to "come up with a disingenuous'' conclusion.

Bromberg praised Zimmer and Stokke and indicated that he felt they were under pressure to come up with the conclusion they did, but that their bosses did not make them try to dump the case.

Cohen argued that Bromberg would have to show that the Attorney General's Office was trying to amend the complaint out of corruption or abdicating their responsibility to prosecute it before reassigning it to a special prosecutor. Bromberg said he was well within his rights to ask prosecutors to provide more information before granting a request to amend the complaint. Cohen disagreed as the two argued about case law.

Cohen claimed he had significant impeachment evidence about the accusers, but feared filing it with the judge because it could come out despite Bromberg's assurances he would not release it to prosecutors or to the attorneys representing the victims.

Cohen also argued that everyone wanted the AG's office to take over the case, but now the attorneys for the victims are objecting because they didn't get the result they wanted.

Attorney Michael Fell, who represents one of the women, said that wasn't true and that all they wanted was for the case to go forward and go to a preliminary hearing.

Cohen and Toohey also raised concerns about Bromberg relying on Jones' ruling to reject the motion to dismiss and reassign the case. In that ruling, Jones went through the allegations to point out that there appeared to be enough evidence to keep going forward with the case, which has never gotten to the point of a preliminary hearing.

Robicheaux and Riley are charged with drugging and sexually assaulting multiple victims they met at social gatherings. Robicheaux is charged in connection with seven alleged victims, while Riley is charged with five. They have both continued to maintain their innocence.

The City News Service and FOX 11's Christina Gonzalez both contributed to this report.