Some families may be without power this Thanksgiving as the red flag warning may force utility companies to temporarily turn off electricity.

LOS ANGELES - It has become the unwanted Thanksgiving tradition- power shut-offs by utility companies. Southern California Edison has already warned customers in some areas that they may lose power through Thanksgiving due to howling Santa Ana winds.

On Thursday, Paramount+ said some of the power outages were impacting their services, preventing fans from enjoying Thanksgiving football.

Below is a map that details some of the cities that were predicted to be affected, from Simi Valley in Ventura, through the Santa Clarita and Acton corridors off the 14, east to the Inland Empire. 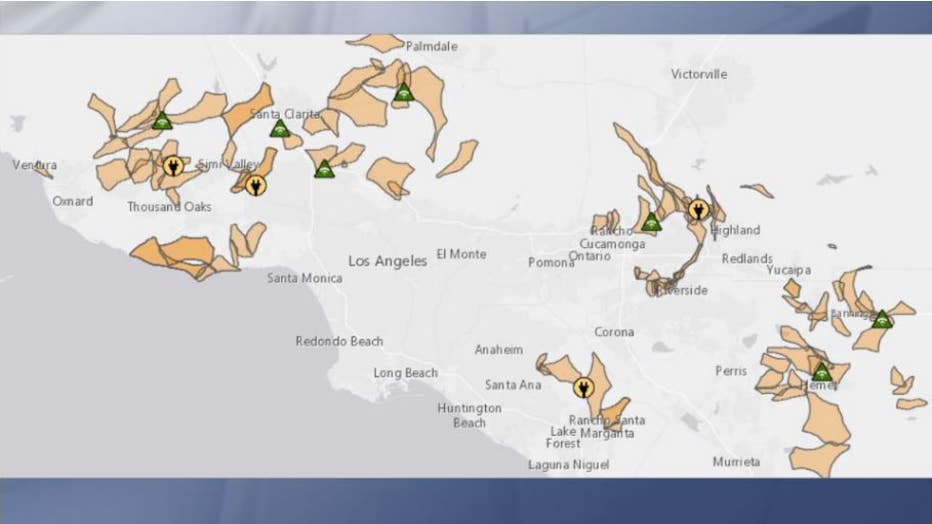 Many residents living in those areas reached out to FOX 11 saying that this is a yearly event that ruins their Thanksgiving meals.

Below is a response posted to Facebook from neighborhoods affected:

Angela Palmer: "I remember last year they said that they were going to do the shut off at 6 PM so I put my turkey in the oven at seven thinking OK great I have the whole day to enjoy with my family and then when they shut it off everyone should be going home by then. Well they shut the power off at 8 AM after my turkey had been in the oven for only an hour. And it’s not just about Thanksgiving it’s the fact that it’s also the beginning of the winter time and it’s cold and we have animals that we need water and without electricity no pumps work!!! I told my husband last year this is not going to stop even after they finish rewiring everything. We invested in a hardwired generac to run our whole home. I know not many can afford to do this and i’m so sorry for them and I hope that someone some how can change what they keep doing to our community "

"When there are potentially dangerous weather conditions in fire-prone areas, we may need to call a PSPS event. During these events, we will proactively turn off power in high fire risk areas to reduce the threat of wildfires. We recognize that PSPS events create hardships for our customers and communities, especially with so many people working and learning from home due to the COVID-19 pandemic. We have heard a clear message from our customers, regulators, government officials, and public safety partners that the company must do more to reduce the need for PSPS. We are currently looking at opportunities to expedite grid hardening to reduce the need for PSPS events and the risk of wildfires."

"We get that," said long time Acton resident Casey Vollmer, who quickly added that the utility has been doing upgrades repeatedly, especially in areas like his city where strong winds during this time are perennial.

He said SCE should invest in better infrastructure than overhead hanging wires. He explains that power shut offs can be just as dangerous with people lighting candles and generators that sometimes start fires.

"It’s not about convenience, it’s a real danger!"

For now, his family has plenty of fuel for the generator. It’s supposed to be cold tonight and he fully expects the electricity to go out. While the furnace runs on gas, the thermostat needs electrical power, so he can’t run the heat without electricity to keep his 88-year-old mother-in-law warm along with their new litter of Jack Russell pups.

SCE is referring people to their website to check on power outages in the area.