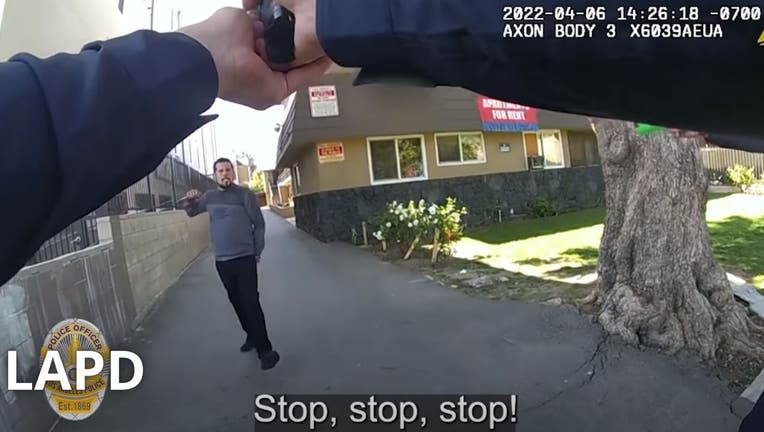 A man is seen walking toward LAPD with a knife before being shot to death. PHOTO: LAPD

LOS ANGELES COUNTY, Calif. - A man believed to be armed with a knife was fatally shot by police in Panorama City.

The Los Angeles Police Department responded to a call of an armed man in the 8700 block of Tobias Avenue a little after 2:15 p.m. Wednesday.

"Officers utilized less lethal and an officer involved shooting occurred," LAPD said in a statement. "The suspect was struck by gunfire and taken into custody."

The suspect, identified as 33-year-old Jesus Castellanos, was pronounced dead at the scene, the Los Angeles Fire Department told FOX 11.

On May 6, LAPD released body camera footages of the incident. In one of the videos, a suspect is seen holding a knife and warning officers he is armed.

"I got a knife dog," Castellanos is heard yelling at LAPD.

"Stop, stop, you're going to get tasted," one of the LAPD officers is heard saying as Castellanos continues walking toward their direction.

After a brief, but tense shouting match between Castellanos and the officers, the suspect started to once again march toward LAPD.

As Castellanos got closer to the officers with the knife raised, one of the officers opened fire, ultimately killing the suspect.

A knife was recovered from the scene. No officers or bystanders were hurt in the incident.