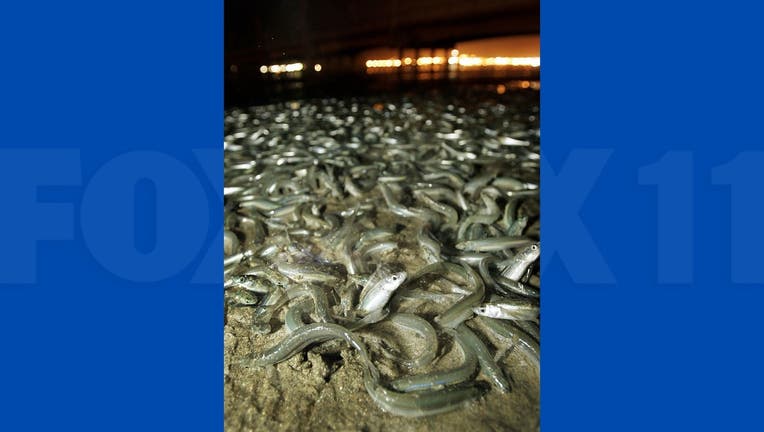 Grunion spawn on the beaches of Belmont Shore in Long Beach during the annual grunion run. (Photo by Wally Skalij/Los Angeles Times via Getty Images)

Grunion are small silver fish whose habitat ranges from Southern California to the northern Mexico coast. Every year, in one of the more unique rituals in local nature, the fish come ashore to lay their eggs.

This spawning season usually begins in late February or early March and continues through August or September. According to the Los Angeles County Lifeguards Twitter page, Cabrillo Beach in San Pedro has been quite active the last few nights, with hundreds of the fish running aground.

When is the grunion run?

The California Department of Fish and Wildlife posts a list of predicted run dates, so people can head to the beaches to spot them. According to the department, the runs are limited to just a few nights across the 5-7 month period.

"Grunion spawn only on three or four nights after the highest tide associated with each full or new moon and then only for a one to three-hour period each night following high tide," the department's website reads.

The next grunion run is predicted for the night of Monday, April 4, from 11:35 p.m. - 1:35 a.m. The next run won't be for another two weeks, but is expected to begin the night of Saturday, April 16 and continue through the night of Tuesday, April 19.

Where can I go see the grunion run?

According to California Fish and Wildlife, grunion can run ashore at pretty much any beach in their habitat. There isn't one hot spot. But the department does recommend calling county lifeguards who can usually tell you where spawning has taken place.

Do I need a permit?