It started in 2005 during Super Bowl XXXIX in Jacksonville, Florida, when Pat Summerall was selected as the honoree for the inaugural event. Realizing the impact this giant in the broadcasting industry had on others, with the blessing of both Pat and Cheri Summerall, The Pat Summerall Award was created and a new tradition during the Super Bowl would be set. The award was created to honor a national broadcaster or prominent sports personality who exemplified the characteristics Pat Summerall wanted the award to represent – an individual who has had an outstanding career and who has made a significant impact in their community.

"I'm blown away and I'm honored and I'm so grateful my family is here tonight. We haven't gotten to spend a lot of time together because of Covid so they were able to come out," she said.

Andrews spoke about being the first female recipient. 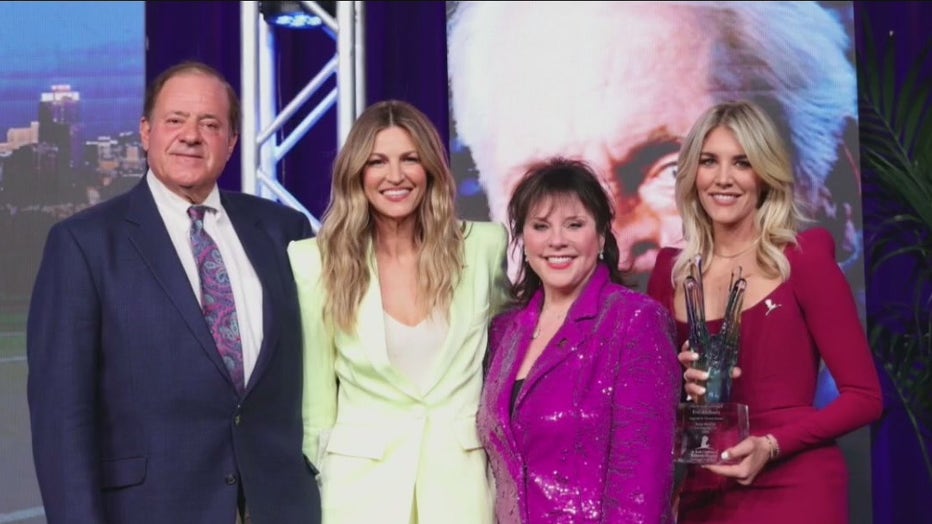 "I just wanted to fit in and be respected and when my manager said you're the first female, I said wow.  I'm also the first to have to wear heels to this event that's receiving this award so I may take them off on stage but it means everything," said Andrews.

"To carry on his [Pat] legacy has been such a privilege. This is family so to have our first female honoree to be Erin, I'm just over the top happy. She's the best and of course we're all in it for the kids," said Cheri.

"When they told me that Erin was a part of it, having the first woman to get the Pat Summerall award, that in and of itself was amazing for us at Fox Sports and then over the last 8 months, getting to learn more about what St Jude does is just incredible," said Shanks.

Andrews first visited St. Jude Children’s Research Hospital in Memphis, Tennessee, in 2013, where she met St. Jude patient Zane and they bonded over their shared love for the Florida Gators. Zane began treatment at St. Jude in 2010 after being diagnosed with acute lymphoblastic leukemia. Since their introduction, they have remained friends and connect via video calls like this one from 2021 during a St. Jude fundraising campaign. Zane is now 15 years old and cancer-free.