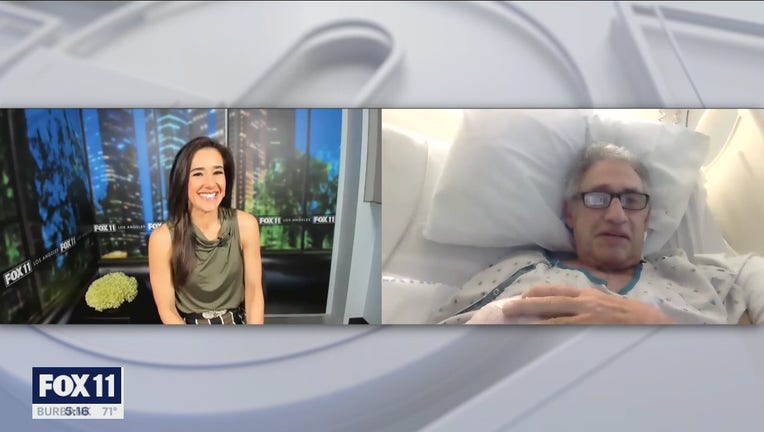 LOS ANGELES - It's been five days since FOX 11 reporter Hal Eisner and photographer Joab Perez were hit by a suspected DUI driver while covering a story in Hollywood.

From his hospital bed, Eisner gave an update on his condition. And in classic Hal Eisner fashion, even bandaged and hospitalized, he doesn’t want to talk about his injuries. He wants the spotlight to be on his Hollywood heroes.

"I have a message for people who came to my rescue," says long-time FOX 11 reporter, Hal Eisner, from his hospital bed.

"And there are a gazillion of them," he says. "if any of you are out there and you tried to help me god bless you. Thank you."

It was Friday afternoon March 19th, when Eisner and Perez, while on assignment conducting an interview near the popular Hollywood and Highland intersection, were hit by suspected drunk driver 55-year-old Carlos Gale.

The suspect’s vehicle jumped the curb striking Hal, Joab, and three other people before crashing into the Highland market.

"I fell on the concrete in kind of a field of glass. I've got a laceration under here," Hal said pointing to his right bandaged hand.

Images from the scene show Hal with a bloodied nose being tended to by Los Angeles firefighters.

"The firefighters were great, thank you," he said.

As for Hal's other injuries, he has a right knee fracture and agonizing back spasms doctors are still trying to get under control.

"They come randomly; it's all of the sudden," he says.

Meanwhile, Joab, a proud husband and new father of a baby girl, also remains hospitalized and is recovering after undergoing surgery Tuesday night. He thanks everyone for the support.

There’s no word yet on when they will head home. Both have a long road to recovery they’re grateful knowing it could’ve been much worse.

Since the incident, we've learned the suspected drunk driver's blood alcohol content was 0.15, almost twice the legal limit. Hal's message to anyone who might drive drunk or drugged: "Don't. It's that simple. Just don't do it."