It was the second of two of tribute shows the band will host in honor of Hawkins, a 26-time Grammy nominee and 11-time winner who grew up in Laguna Beach.

The first tribute took place Sept. 3 at London's Wembley Stadium -- and ran some six hours and featured more than 50 songs.

Tuesday's show -- featuring musicians from Pearl Jam, Nirvana, the Police, Motley Crue, Black Sabbath, Rush, Led Zeppelin, the Red Hot Chili Peppers and Queen, among numerous others -- was scheduled to start at 7 p.m., and was sold out.

The online entertainment website Consequence called the Wembley show "a cathartic six-hour celebration of a rock legend" that focused on a theme of "family." It featured the Foo Fighters as the backup band for the large array of performers before the Foo Fighters themselves took the spotlight for a headlining set.

Hawkins died March 25 in Bogotá, Colombia, where he and the band were scheduled to perform at the Festival Estéreo Picnic before headlining at Lollapalooza Brazil. 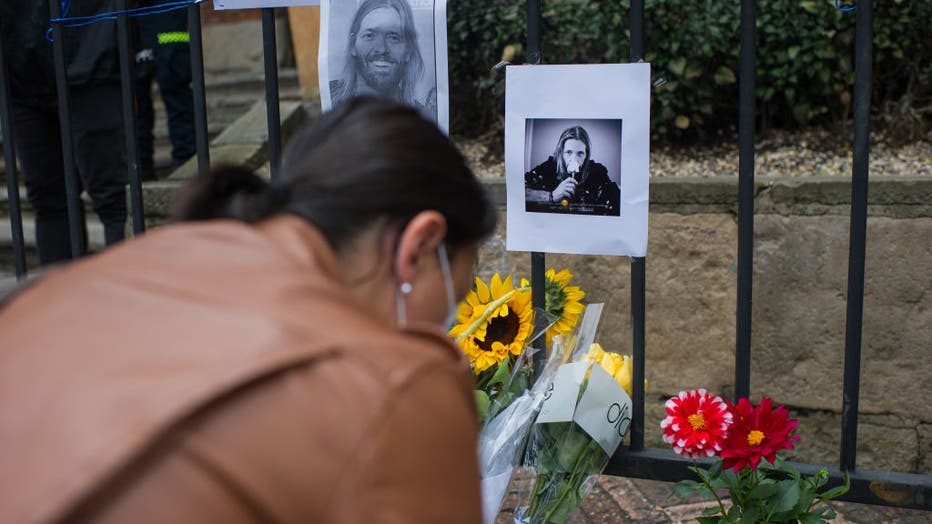 Fans and supportes leave flowers and messages with candles after the death of Taylor Hawkins, drummer of the Foo Fighters death during the night of March 25 at the Four Seasons (Casa Medina) Hotel in Bogota, Colombia. (Photo by: Sebastian Barros/Long

Toxicological tests on urine from Hawkins' body preliminarily found 10 psychoactive substances and medicines, including marijuana, opioids, tricyclic antidepressants and benzodiazepines, according to a statement from the Colombia's Prosecutor's Office.

Following his death, the band canceled all its upcoming concerts, including two planned shows at Banc of California Stadium in Los Angeles. The tour was scheduled to begin in late April, with the Los Angeles shows planned for Aug. 18 and Aug. 20.

The Foo Fighters announced Hawkins' death in March on social media, saying "The Foo Fighters family is devastated by the tragic and untimely loss of our beloved Taylor Hawkins. His musical spirit and infectious laughter will live on with all of us forever."

Hawkins' wife, Alison, tweeted at the time, "My deepest thanks and admiration go out to the global Foo Fighters community and Taylor's fans far and wide for the outpouring of love each and every one of you have shown our beloved Taylor. ... As Taylor's wife, and on behalf of our children, I want to share how much you meant to him and how dedicated he was to `knocking your socks off' during every performance.

"... In celebration of his life, it is now up to all of us who loved him most to honor Taylor's legacy and the music he gave us."

Hawkins played in the Orange County-based band Sylvia before becoming the drummer for Canadian rock singer Sass Jordan. From June 1995 until March 1997, Hawkins was Morissette's drummer on the tour supporting her 1995 album "Jagged Little Pill" and her 1996 "Can't Not" Tour.

Hawkins began his association with Foo Fighters in February 1997 when he replaced William Goldsmith as the band's drummer for its second album, "The Colour and the Shape."

Following the album's release, frontman Dave Grohl called Hawkins to seek recommendations for the band's new drummer. Grohl was under the impression that Hawkins would not leave Morissette's touring band because she was a bigger act than Foo Fighters at the time.

To Grohl's surprise, Hawkins volunteered to join the band himself, explaining that he wanted to be a drummer in a rock band rather than for a solo act. The band announced Hawkins would be the new drummer on March 18, 1997.

Hawkins, a Hidden Hills resident, is survived by his wife and their three children.