The young officer was laid to rest at Forest Lawn-Hollywood Hills.

A private funeral will be held today for Fernando Arroyos. Arroyos was shot and killed during an apparent robbery in South LA on Jan. 10. He was 27 years old.

Arroyos, 27, was gunned down during a robbery on Jan. 10 in the 8700 block of Beach Street in the unincorporated Florence-Firestone neighborhood. Authorities said Arroyos was targeted while he was house-hunting with his girlfriend.

"Since he was a young child he always wanted to be a police officer," said family friend Ray Bernardo. He recalled moments in the past where as a young child Arroyos played cops and robbers with his friends and family.

Arroyos always gave back to his community and helped whenever he could. He attended Crenshaw High School and graduated from UC Berkeley with honors.

"Arroyos was a servant of God, a peace keeper, and always found the good in people," said Lt. Rex Ingram with LAPD Olympic Division. "Each night you came to work you did a tremendous job."

"We are gathered here today in this beautiful setting overlooking the San Fernando Valley to grieve our loss, as well as to honor the life of Los Angeles Police Officer Fernando Uriel Arroyos -- a young officer who held such promise for this city, who was just beginning his career as a police officer in this Los Angeles Police Department, when he was suddenly, violently, and senselessly taken from us in a murderous act of violence for a few silver chains," Moore said.

"He was well-respected, and loved by many," the chief continued. "From those who knew him best, I am told Fernando was disarming in his humility and willingness to help at a moment's notice. ... Officer Arroyos strived to serve with purpose and dedication."

Moore thanked the sheriff's department for its investigation into Arroyos' killing, and he recognized the presence at the funeral service of the four sheriff's deputies who responded to the scene of the crime and brought the mortally wounded officer to the hospital.

"We've lost an angel in this City of Angels," Garcetti said. "We've lost somebody whose chapter is now written here -- and what a chapter it was. ... God has called Fernando home."

Following the 90-plus-minute service, the casket was escorted from the outdoor service area, followed by family and colleagues of the slain officer. 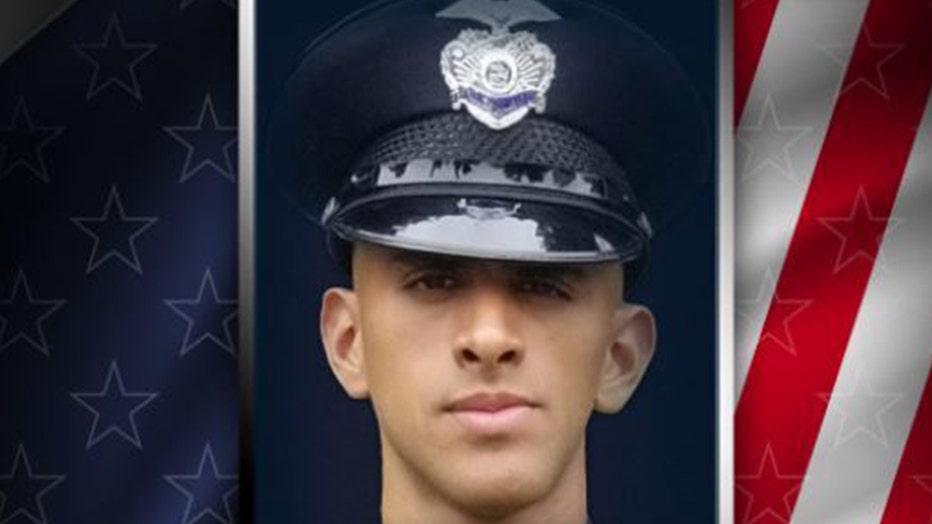 Arroyos is survived by his mother, father, girlfriend, grandfather and step-father.

On Jan. 27, a federal grand jury returned an indictment against three alleged gang members and one associate for the crime. The three men and the 18- year-old girlfriend of one defendant were charged with violating a federal racketeering statute.

Charged with violent crime in aid of racketeering to increase and maintain position within the Latino gang based in South Los Angeles were:

Rios and Contreras are set to be arraigned on Feb. 3, Grisham on Feb. 7, and Cisneros on Feb. 10 in Los Angeles federal court.

According to a complaint filed Jan. 13 by FBI Special Agent Seamus Kane, Rios admitted his involvement in the killing in an interview with Los Angeles County sheriff's detectives, saying he and the other defendants were driving around looking to "make money," which he further explained meant to rob a person of property or money.

Arroyos suffered a single gunshot wound, ran from the area and collapsed in an alley. Responding deputies found bystanders performing CPR on Arroyos. The deputies loaded him into a patrol car and took him to a hospital, where he was pronounced dead.