LAPD officer Fernando Arroyos was killed Monday night while he was looking at a house he wanted to buy while off duty. His mother Claudia Membreno says she was supposed to be with him that night.

"Why, why?" is the question Claudia Membreno keeps asking. The mother of LAPD Officer Fernando Arroyos was supposed to be with her son while he was off duty, checking out a house for sale with his girlfriend. She was waiting for him to call her and tell her about the house. Instead, she was summoned to the hospital where her son was taken, fatally shot by suspects in what seems to be a robbery gone bad.

"Over what, a $200 chain?" Membreno asked, referring to the gold chain her son won wore around his neck. Her only child, Arroyos showed plenty of promise, even before he became an officer three years ago. He graduated with honors from UC Berkeley, says the obviously proud mother adding, "Harvard wanted him, too!"

The Los Angeles Sheriff's Department announced Wednesday that four people had been arrested in connection with Arroyos' murder. 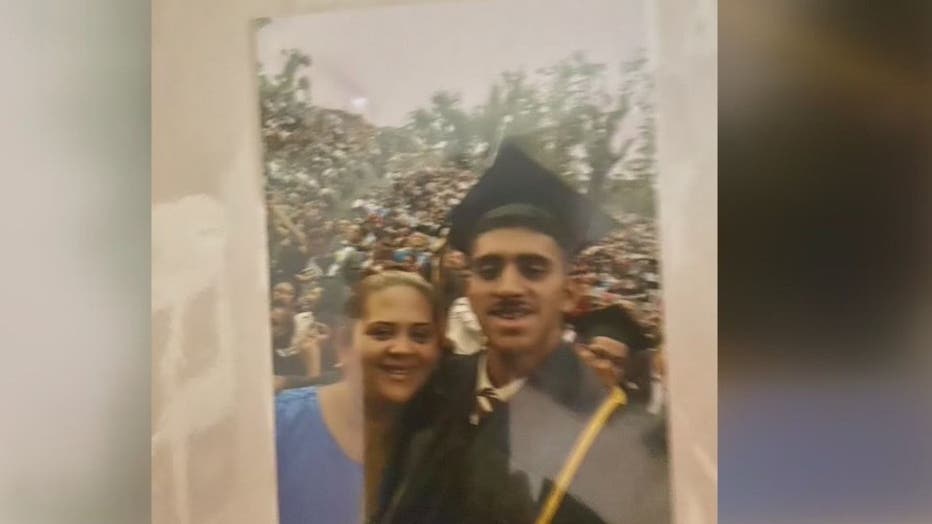 Ever since Arroyos was a little boy, he wanted to be a police officer, Membreno explains. "I tried to talk him out of it because of the dangers," she adds, tearing up as she mumbles "and he wasn’t even working!"

RELATED: 4 arrests made in murder of off-duty LAPD officer in South LA

Membreno said her son had been saving for a house ever since he started working at LAPD's Olympic division. "He always checked in," she said, always trying to reassure her of his safety. In the tiny apartment where Membreno says her son was born and grew up, there are photos of him everywhere. Her grief is palpable, and particularly painful when she explains that she lost her mother own a month ago.

Now she has to plan a second funeral, for her only child. He was 27 years old.