The Los Angeles Police Department said five people have been detained in the killing of an off-duty officer.

LOS ANGELES - A 27-year-old officer with the Los Angeles Police Department was shot and killed while off-duty during what investigators believe was an armed attempted robbery while house hunting in South Los Angeles.

LAPD Chief Michel Moore identified the fallen officer Tuesday as Fernando Arroyos. He was a three-year veteran of the department and was assigned to the Olympic Division.

Law enforcement sources said Tuesday afternoon three men and two women were detained in various search warrant operations in the furtherance of this investigation. They were being held on lesser charges as the investigation continues. Officials noted three of those detained are documented gang members.

RELATED: 4 arrests made in murder of off-duty LAPD officer in South LA

Officer Arroyos grew up in South LA and leaves behind his mother, father and stepfather.

He was a graduate of Crenshaw High School and UC Berkeley. He graduated with a degree in legal studies and could have pursued a career as an attorney or worked for the FBI, but he wanted to work for the LAPD in the community he grew up in.

Arroyos was the only son of immigrants, according to Los Angeles Mayor Eric Garcetti, who plans to meet with the family.  Community activists, usually speaking against police shootings, found themselves denouncing the violence that took "a man who was looking to move into the community, like we want law enforcement to do, to be amongst us, get to know us and treat us fairly," said Najee Ali from Project Islamic Hope. 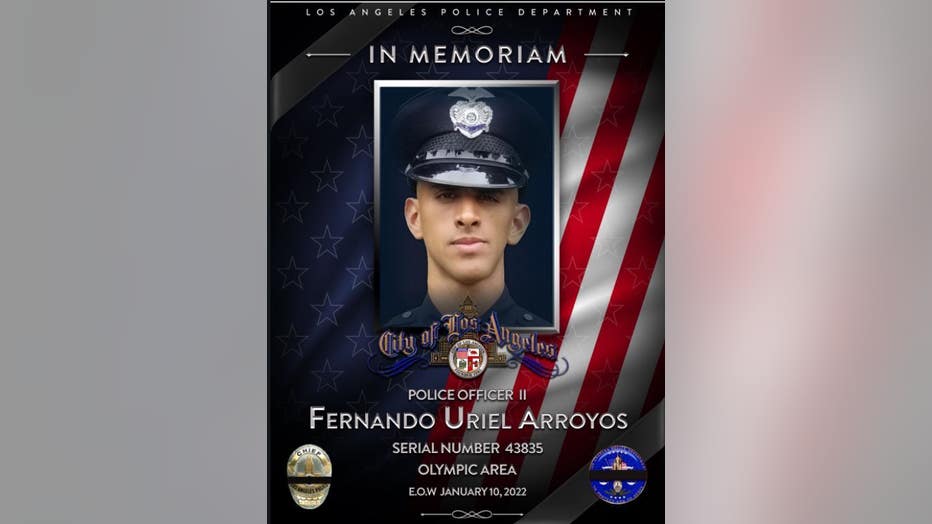 "He was the only child who had a promising future. A bright future that was taken away viciously over a street robbery," Moore said. "We know that there are people out there who are responsible for this, and I am absolutely convinced in our discussions with investigators that we will identify and bring to justice the person or persons responsible for this murder."

A procession was held in his honor Tuesday morning.

A procession was held on the morning of Jan. 11 after LAPD Officer Fernando Arroyos was shot and killed while off-duty in South Los Angeles. He was 27.

The shooting occurred Monday around 9:20 p.m. on 87th Street in the Florence-Firestone area, located near the intersection of Firestone and Graham avenues.

Officials say Officer Arroyos was not in uniform and was with his girlfriend to look at a home they were interested in buying. They were walking down an alleyway and taking pictures of the property when a black pickup truck pulled up near the couple. Three men got out of the vehicle and confronted the couple in what police believe was an attempted robbery. During the confrontation, Arroyos exchanged gunfire with the suspects.

A witness said before the shooting, Arroyos advised his girlfriend to run and to get back into their car. The witness also reported hearing his girlfriend’s cries for help and that one of her neighbors ran outside to perform CPR on Arroyos.

An early morning procession was held Jan. 11 for a fallen officer who worked for the Los Angeles Police Department.

Deputies with the Los Angeles County Sheriff’s Department responded to the scene and discovered Arroyos was in grave condition. The deputies rushed him to St. Francis Medical Center in Lynwood where he died.

LASD deputies recovered two firearms at the scene – one belonging to Officer Arroyos and the other they believe belongs to one of the suspects.

An off-duty police officer was taken to the hospital after a shooting in South Los Angeles.

"We do believe we have an officer-involved shooting here that our officer exchanged gunfire with at least one of these suspects. We do have our officer’s gun, and we have an additional weapon that we believe was responsible for this assault. We are very limited as far as how much information we have, but we know we need the community’s help, and we also have all the faith and confidence that we’ll identify the person or persons responsible for this terrible attack," said Moore.

Anyone with information is asked to contact the LASD. They are leading the investigation since the shooting occurred outside city limits.