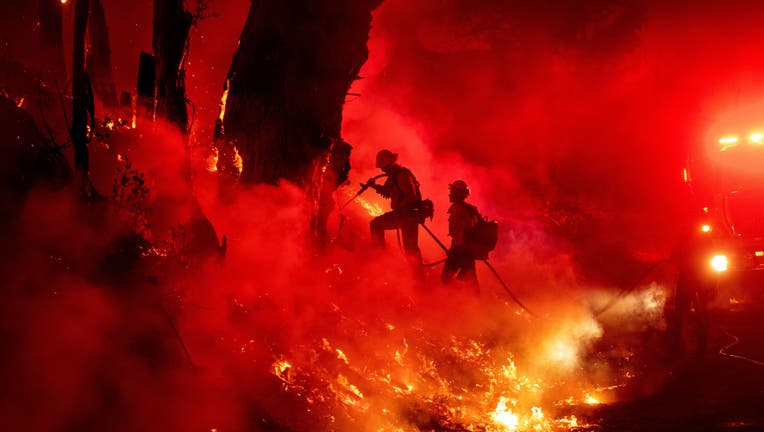 TOPSHOT - Firefighters work to control flames from a backfire during the Maria fire in Santa Paula, California on November 1, 2019. (Photo by Josh Edelson / AFP) (Photo by JOSH EDELSON/AFP via Getty Images)

SAN FRANCISCO - Federal officials are prepared to bill wildfire victims for a portion of the nearly $4 billion the government says it’s owed by Pacific Gas & Electric Co., if the debt isn’t resolved as part of the utility’s bankruptcy case, according to a newspaper report Sunday.

The Federal Emergency Management Agency has asked for reimbursement from PG&E to cover costs from the government’s response to destructive fires in 2015, 2017 and 2018. Under PG&E’s current plan to resolve its bankruptcy, any payment to FEMA would have to come from the $13.5 billion the utility intends to reserve primarily to settle claims from wildfire victims, the San Francisco Chronicle reported.

Victims’ lawyers are fighting FEMA’s claim, which would take up nearly 30% of the settlement. But FEMA told the Chronicle it is compelled to seek compensation from PG&E. Otherwise, individual victims would be responsible if they get settlement funds that duplicate money already paid by the federal government, according to Bob Fenton, the agency’s regional administrator.

Fenton said FEMA has “no interest” in reducing the amount of settlement funds available for fire victims.

"What we are interested in doing is holding PG&E responsible and accountable for the billions of dollars taxpayers provided to assist individuals and communities affected by the wildfires,” he told the newspaper. “The last thing I want to do is have to go after these individuals that have received claims from the bankruptcy where certain parts of that claim may duplicate funding that we’ve already given them. ... It’s much easier up front to go ahead and simply deal with PG&E directly.”

The FEMA dispute is one of several major unresolved issues in the PG&E bankruptcy. PG&E has already won court approval of its deal with victims’ attorneys and a separate $11 billion settlement to resolve claims from insurance companies. But the company must clear a series of other hurdles as it works to resolve the rest of the case, which includes a broader bankruptcy exit plan.

FEMA has requested about $3.9 billion in bankruptcy claims against PG&E because of the 2015 Butte Fire, the 2017 wildfires in wine country and the 2018 Camp Fire. Court papers show that only about $282 million of the total relates to individual assistance FEMA gave to victims of the disasters — the rest is for aid provided to other government agencies and administrative costs.

FEMA’s attempt to recover from PG&E was sharply criticized by 40 members of Congress in a letter to the agency’s acting administrator last week. The letter cited concern at FEMA’s “decision to litigate claims to the settlement fund for wildfire victims established by PG&E.”

FEMA’s efforts also have drawn criticism from James Lee Witt, a former director of the agency, who told the Santa Rosa Press Democrat newspaper last month that it was an “unusual” and “inappropriate” request.

U.S. Bankruptcy Judge Dennis Montali is expected to consider the FEMA issue at a hearing next month.

Eric Goodman, an attorney for a committee of fire victims involved in the PG&E bankruptcy case, said FEMA’s defense of its $3.9 billion request “doesn’t hold any water” with him. Goodman’s firm is asking Montali to reject FEMA’s claim.

In a statement to the Chronicle, PG&E said it agrees with the victims’ committee that “FEMA does not have a valid legal claim against the company.”