COLUSA COUNTY, Calif. - Former California Governor Jerry Brown is now living about an hour’s drive from Sacramento, but it feels like a world away.

"I’m very happy I’m here. This is probably the best time in my life." 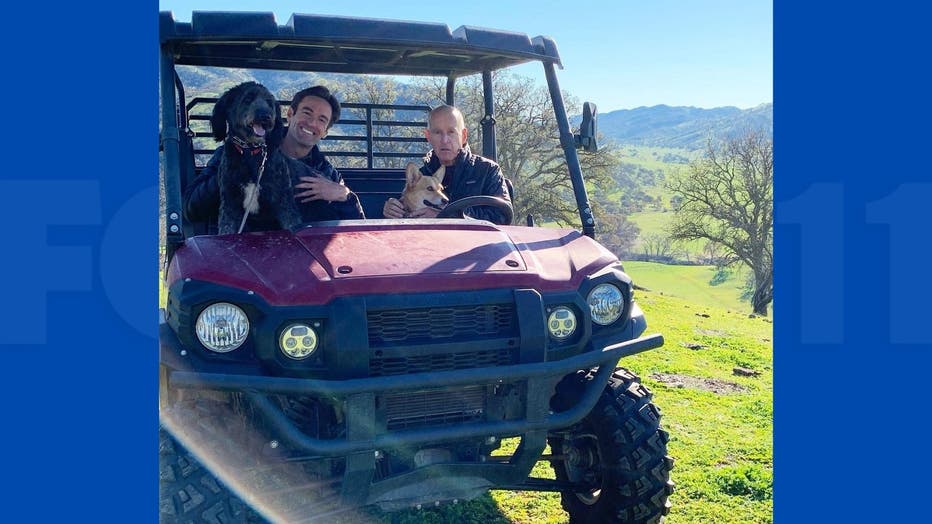 The 4-term California Governor is running a 2,500 acre ranch in Colusa County that’s been in his family since the nineteenth century.

On the day Gavin Newsom officially became California Governor in 2019, Brown and his wife Anne left the Governor’s Mansion and moved into what they call "Mountain House III."

They share the home with their dogs, Colusa and Cali, who delight in riding shotgun in Brown’s ATV. He often traverses the mountains here.

"This is the best car I ever bought," he said as he brought FOX 11 along for a ride. 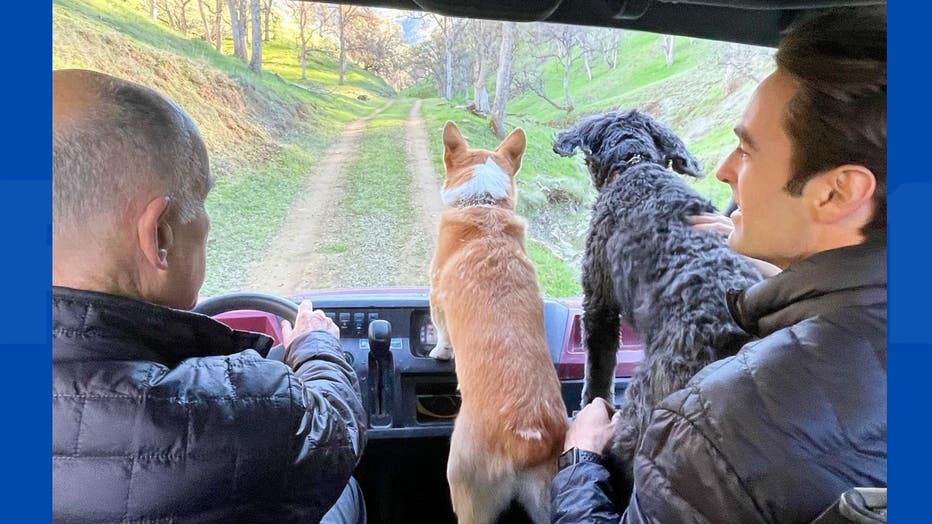 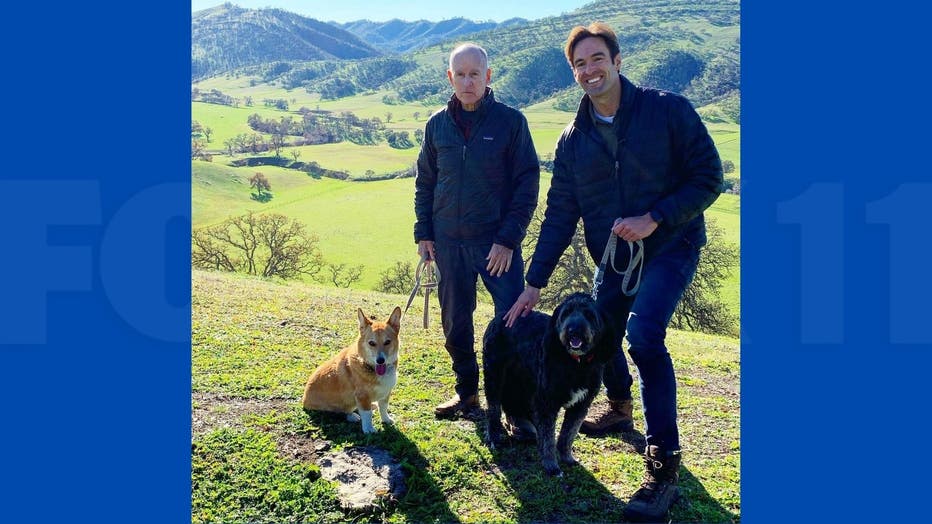 Brown now lives completely off the grid. His power comes from solar panels and his water comes from a well and rain collection.

Nearby properties are full of cows and not many people.

"It is rather conservative, most people here voted for Trump, voted for the recall are not vaccinated. But, they are good neighbors," Brown said.

Despite the remote environment, Brown is constantly on Zoom calls and staying up with the news.

"I’m not just here chasing the cows or the elks away," he joked.

Brown shared his thoughts on a variety of hot topics during an extended, exclusive interview with Elex Michaelson for FOX 11’s political show "The Issue Is:" 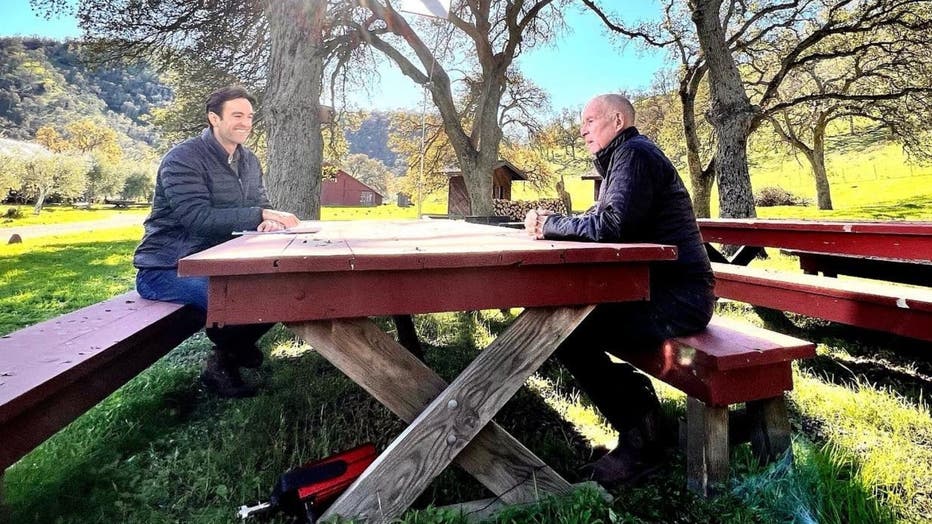 Here are a few of the highlights:

Gavin Newsom served as Brown’s Lieutenant Governor in Sacramento for eight years before taking over the main job.

During that time, Brown and Newsom were not especially close.

Brown says he and Newsom rarely talk these days, and he’s never visited his ranch.

We asked him to offer advice to his successor?

"Watch how you spend that money! He’s going to be re-elected. I feel comfortable about that. And then, I think that second term can be difficult," Brown said.

He continued: "the more exposure you get, the more they get tired of you. It was one thing that I noticed after my first eight years. I think people would see enough of it. And the problem is when you get on television, you're on television and the next story may be a snatch and grab or some debacle, some bad fire murder. And you're in the news and the news is bad," Brown said.

His suggestion? "One strategy is don't be in the news so much and you have the people feel better about you…And when you have something good, tell us about it," he said.

Brown said during his first two terms in the 1970s and 80s, he had his eye on the presidency. When he returned in 2010, he focused solely on California.

Brown wouldn’t say whether he thinks Gov. Newsom harbors presidential ambitions like he did.

"When you are Governor, you think ‘why not be president? Right?’ And that was not a good thing on my part. Running for president in 1980 was a very dumb move on my part," he said.

Gov. Brown is concerned about images of smash and grab robberies on television screens every night.

He said there are not enough consequences currently for criminals.

"You’ve heard about the redistribution of wealth. We need a redistribution of incarceration… We've got all these people committing break ins, snatch and grab shooting up heroin on the street and they just walk out. So if we got the long termers and got them out a little quicker and we took the short term risk…put them in and give them some drug treatment and training," he said.

For example, stealing any goods under $950 is considered a misdemeanor.

Brown said he did not support Prop. 47 at the time.

But, since it is the law of the land, he said courts should start to make misdemeanors matter more.

"Why can't the courts decide we want to target retail theft or home burglaries? And, if you get caught, we're going to put you first event, six months, nine months? Whatever! Do something!"

"Right now, you they give you a ticket and you walk in and you book out. That's because we have no bail and no consequence. So that can't work. And I'm not saying that you just sit in a cell and look at the wall. You've got to have activity. You have to work," he said.

Gov. Brown is concerned that California could soon be falling off a fiscal cliff.

But Brown remembers we had record deficits not too long ago. Brown implemented dramatic spending cuts and a temporary tax cut on the wealthy.

"Well, one of the reasons you have a surplus is the tax increase that I proposed was for seven years…or eight years…it was supposed to expire. But if it had expired, we'd have a more modest surplus and would be more disciplined, said they renewed it. So now we have all this money, and that's what always happens in California. You get into a recession or we need money and then you get the money. The recession ends and the recovery happens and the revenue flows in. And now you have double the money. So this is the problem of balancing a very volatile income stream so that our tax system to," Brown said.

In his view, California should have let that temporary tax increase end.

"It’s very difficult to spend money well, particularly when, you know, it's not going to be there in two years. We are again, we have to be. That's the history of California. The money flows in and then it goes away. Arnold Schwarzenegger had a deficit of 60 billion," Brown said.

He’s worried about a similar fate.

Our full, half-hour special with Jerry Brown airs on The Issue Is: with Elex Michaelson this week.

The episode debuts on Friday, December 17 at 10:30 p.m. on FOX 11 Los Angeles and airs around California all weekend long. For airtimes, click here: https://www.foxla.com/the-issue-is/the-issue-is-tv-schedule

Subscribe to "The Issue Is" podcast to hear our extended, unedited interview after our broadcast: https://audioboom.com/channel/the-issue-is