The grieving family of one of the two slain El Monte police officer spoke with FOX 11. The family of Joseph Santana said the deadly incident may have been prevented had LA County DA George Gascon not let the suspect back on the streets due to Gascon's policies.

"He meant the world to me. He was my only son. He went out of his way to do anything for anyone," Olga Garcia told FOX 11's Phil Shuman.

Garcia, speaking softly and slowly, tried to put into words how she's dealing with the loss of her only son, 31-year-old Joseph Santana, an El Monte police officer.

"He was a family man. He loved his wife, his children. He looked forward to his days off so they could spend time together to do things. He was just a wonderful father, husband, son," she said. 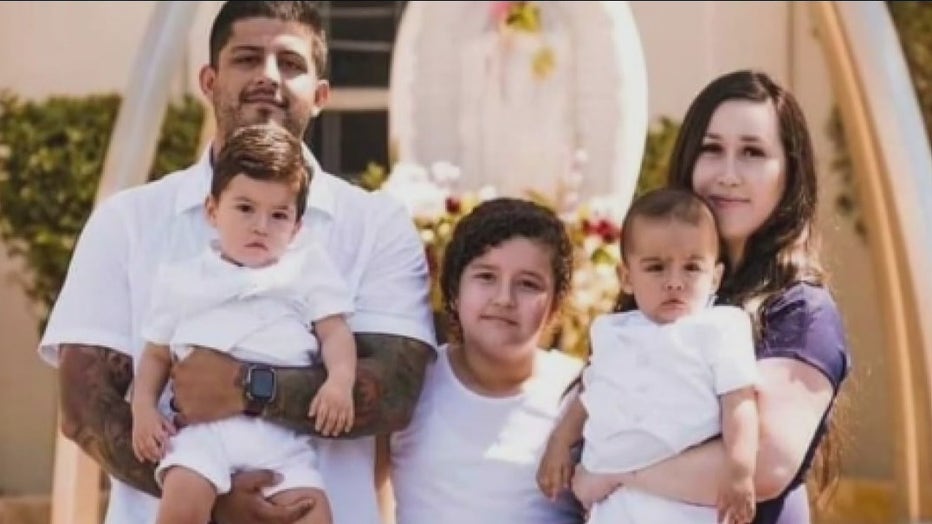 Santana grew up in El Monte, the middle of three children.

"I wish I could just tell him I was proud of him and I never got the chance to tell," his younger sister Bianka said, as she choked back tears. "To everyone else. This is just a news story, but to us, this is real life."

Santana was shot and killed, along with Corporal Michael Paredes while responding to reports of a stabbing at an El Monte motel.

What makes this even more difficult, was the news that the suspect who police later shot and killed, who served time for auto theft and burglary some ten years ago, was on probation from his most recent gun arrests in 2020 instead of in prison because of DA George Gascón's policies.

The suspect, Justin Flores, 35, got probation and a deal. A district attorney's spokesperson said the sentence he received in the firearm case was consistent with case resolutions for this type of offense. Given his criminal history and the nature of the offense.

"Gascón's just letting all these criminals out and they just keep doing one crime after the other. And that guy should've been in jail, if he wouldn't have been out, my son and the other officer would still be here," Garcia said.

The outpouring of support for the fallen officers outside police headquarters in the city of some 100,000 makes Garcia feel good. What would make her feel better, she says, would be if DA Gascón is recalled.

The Peace Officers Research Association of California, or PORAC, established a fundraising campaign on behalf of the officers' families. The fundraiser can be found at https://porac.org/fundraiser/el-monte-police-officers/.