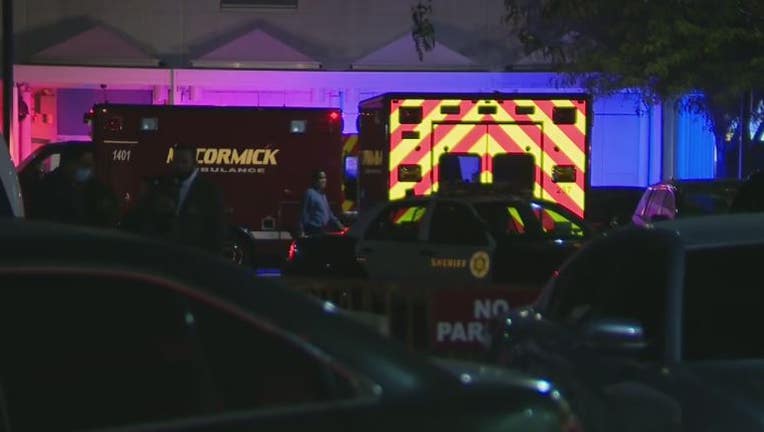 COMPTON, Calif. - As two Los Angeles County sheriff’s deputies fight for their lives after being shot, a crowd of protesters gathered outside the hospital chanting “we hope they die”.

The sheriff’s department says protesters blocked the entrance and exit of the emergency room at of St. Francis Hospital's in Lynwood.

"To the protesters blocking the entrance & exit of the HOSPITAL EMERGENCY ROOM yelling 'We hope they die' referring to 2 LA Sheriff's ambushed today in #Compton: DO NOT BLOCK EMERGENCY ENTRIES & EXITS TO THE HOSPITAL. People's lives are at stake when ambulances can't get through," the LA County Sheriff's Department Tweeted early Sunday morning.

Video from the scene, showed deputies guarding the front entrance of the hospital as a handful of protesters stand outside.

The two deputies underwent emergency surgery after being shot in their patrol car outside the Metro Blue Line station in Compton Saturday night.

The deputies have only been identified as a 31-year-old mother and a 24-year-old man. Both of their families were at the hospital.

“Two deputies were ambushed in a cowardly fashion. It pisses me off and it dismays me,” Villanueva said.

As protesters gathered outside, another confrontation broke out at the hospital… this time between deputies and a local reporter.

KPCC and LAist reporter Josie Huang was arrested by deputies outside the hospital.

She was credited with taking a photo of the sheriff during his press conference, as well as contributing to the publication's coverage of a separate protest against the department earlier in the day.

"She didn't have proper credentials,'' said Deputy Juanita Navarro of the Sheriff's Information Bureau, confirming deputies took Huang into custody on suspicion of obstruction of justice by "interfering with a lawful arrest.''

The arrest set off a digital skirmish between the NPR station's news team and the sheriff's department.

At 1:31 a.m. Sunday, KPCC executive editor Megan Garvey tweeted a video Huang filmed right before her arrest that showed a deputy pointing a weapon directly at a small group of protesters. Exactly one hour later, Navarro posted a tweet that said, "Don't interfere with an arrest,'' written seven times.

Garvey confirmed Huang would be charged with a misdemeanor.

Just before 5 a.m., Huang announced she'd been released from the Century Regional Detention Center and was on her way home, hinting that she has
"thoughts and videos to share soon after a little rest.''