LOS ANGELES - An investigation is underway after a deputy was seen on video repeatedly striking a protester with his shield.

The video is graphic and violent. The woman who shot it, Cammy Hicks, was in her car waiting for protesters at a West Hollywood rally decrying the police killing of Bryanna and the grand jury decision to indict one officer, only because his bullets went into another apartment.

A group of about a hundred, following a couple of trucks with loudspeakers on the back, had been moved from the corner of Santa Monica and San Vicente with an order to disperse, there doesn’t seem to be a question about that.
The driver of one of the vehicles says they were moving around the corner when deputies descended on them.

Hicks was across the street, and hearing flash bangs and what sounded to her like bullets, she turned on her phone to Instagram. While filming she caught a group of officers holding down a man while another deputy used his shield to hit the man’s lower leg area several times. .

“I personally haven’t seen something like this. That’s what shocked me the most to watch him physically put his body and soul into it, just going for his ankles. For what purpose,” she added. 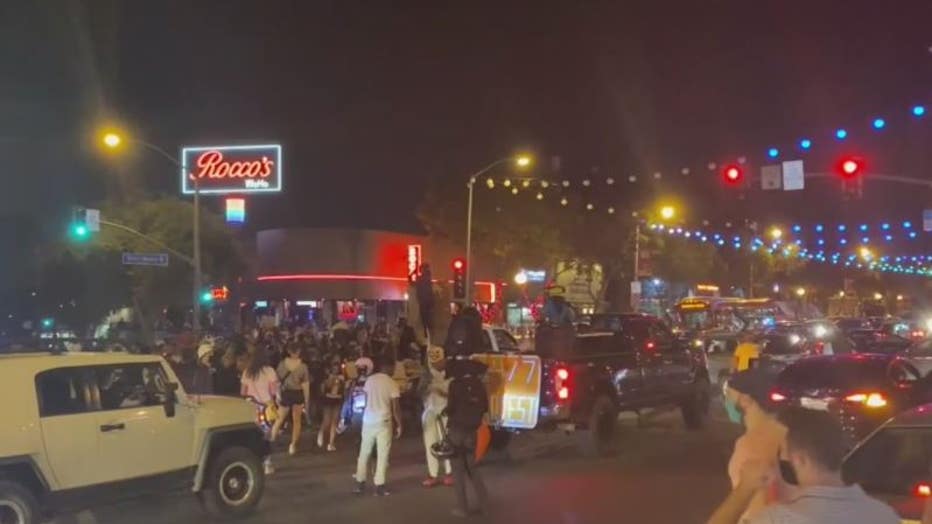 Others have captured the scene, and LA County Sheriff officials say they are looking into a “use of force incident”. They add that they arrested six people, who have since been released Saturday afternoon from the West Hollywood substation. The man seen on the video was in crutches and did not wish to speak on camera. But the driver of the vehicle did share what he saw.

“I witnessed three officers on this tiny guy and it looked like he was trying to chop his legs off with a shield,” the driver told FOX 11.

Sheriff officials would not go on camera. They blocked the intersection Saturday night in anticipation of more rallies, but none materialized, although people in the neighborhood, who saw last night’s incident were talking about it. Most are supportive of their officers, but many have questions about the use of the shield. Just about everyone we talked to off camera express they are not looking forward to the next few weeks as we approach the presidential elections.