Vanessa Walker, a Northern California ICU physician, started a vlog after getting the Pfizer vaccine and documented her side effects

With the COVID-19 vaccine in its second week of distribution, one critical care physician in California started a vlog to detail her side effects in an effort to elicit trust and diminish hesitation.

Vanessa Walker, an ICU physician at Sutter Roseville Medical Center, got the vaccine made by Pfizer Inc. and BioNTech on Friday. She documented her condition every 12 hours on her YouTube vlog. It was skepticism about the timeline and possible side effects that drove her to share her experience, she said in a press conference Monday.

"I put myself out there so people can see that someone who is actively out there treating patients with COVID has faith in the medical community and all the science that went behind this amazing vaccine," Walker said, urging all health care workers to be vocal with their journey.

Walker, who's also the Sutter Valley Area electronic ICU medical director, said there were no initial side effects when she got the shot, other than some muscle soreness. As the day went on, she noticed some fatigue and an achy body, which she described as similar to the early stages of other viral infections. That was gone when she woke up the next day and the arm soreness was better by Sunday. 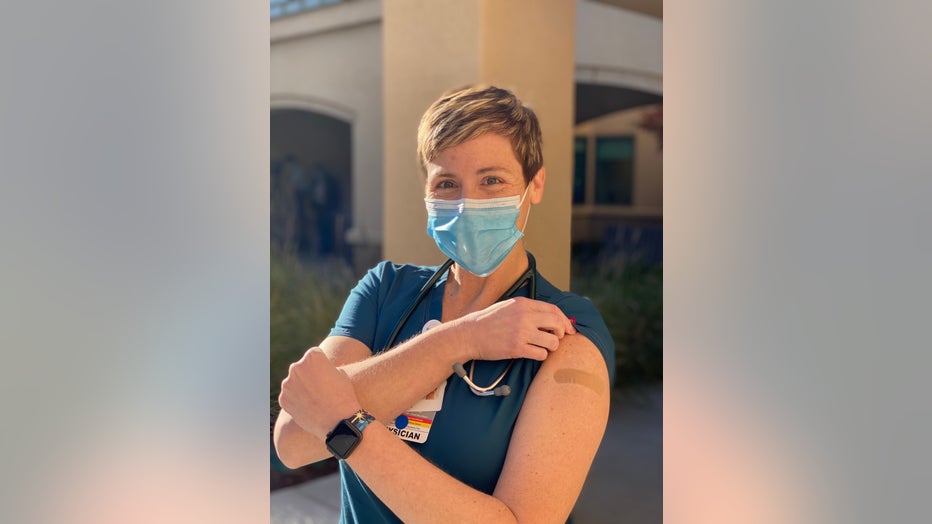 Vanessa Walker, D.O. started a vlog to document her side effects with the COVID-19 vaccine.

Her colleagues at the hospital who received the vaccine described similar reactions, along with minor joint pain and muscle stiffness for some people.

One health care worker's experience comes as three in Alaska have experienced an allergic reaction after receiving a shot. Two were severe, with the most recent one involving a female clinician not known to have allergies, and the other was minor. Dr. Joe McLaughlin, the state epidemiologist, said last week that reports of reactions should be kept in context with the number of people being vaccinated.

"And then on the other side, we’ve got COVID, which is surging throughout the United States, and we’re having thousands of deaths per day from COVID. So if you just look at the big picture, the vaccination really makes such great sense," he said.

The vaccine developed by Pfizer Inc. and Germany’s BioNTech began U.S. distribution last week. The initial shots have been given to about 556,000 Americans, according to the Centers for Disease Control and Prevention. Moderna’s vaccine was approved by regulators last week and shipments are expected in California early this week.

But even as the Moderna vaccine prepares for distribution, Walker is worried about the long road ahead and risk of massive surges that will impact health care systems.

"The patients are coming into the emergency department in droves, they really are," Walker said. "Every day we’re admitting more and more to the hospital and were getting less and less out of the hospital to their homes."

On Sunday, a federal advisory panel decided that next in line for the vaccine should be people 75 and older and certain front line workers, accounting for a combined 50 million Americans. The recommendation from the same expert panel who decided health care workers and nursing home residents should get the first doses will go to the CDC director and to states as guidance.

Meanwhile, Walker still needs to get the second dose of the vaccine. She said it can’t come soon enough and it's a sign of relief for health care workers who have been at risk of exposing family to the virus. Walker said that until everyone is vaccinated she will continue to wear a mask.

Her biggest frustration, one that she said is shared amongst colleagues, is that Americans now know the tools to best prevent the spread of the virus -- avoiding indoor gathering and following the basic safety protocols -- yet California is seeing an enormous surge of daily cases, hospitalizations and deaths.

"We feel like we’re yelling into a storm and no one is hearing us," Walker said.