Jenner's tweet, sent one day after she filed paperwork to run for governor in a likely recall election later this year, continued by saying "Tell Gavin we need less pandering to big tech donors."   Newsom on Friday directed the Department of Conservation's Geologic Energy Management Division to initiate regulatory action to end the issuance of new permits for fracking by January 2024.

Newsom also requested that the California Air Resources Board analyze pathways to phase out oil extraction across the state by no later than 2045.  "The climate crisis is real and we continue to see the signs every day," Newsom said. 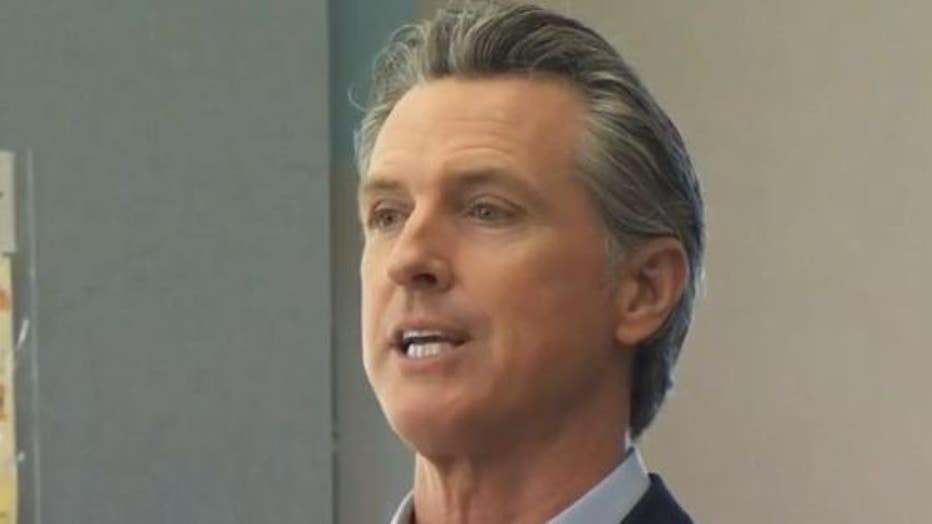 "As we move to swiftly decarbonize our transportation sector and create a healthier future for our children, I've made it clear I don't see a role for fracking in that future and, similarly, believe that California needs to move beyond oil."

In announcing her candidacy Friday, Jenner said in a statement "for the past decade, we have seen the glimmer of the Golden State reduced by the one-party rule that places politics over progress and special interests over people."

Caitlyn Jenner is officially running for governor of California.

"As Californians, we face a now-or-never opportunity to fundamentally fix our state before it's too late," Jenner said. "Taking on entrenched Sacramento politicians and the special interests that fund them requires a fighter who isn't afraid to do what is right.   "I am a proven winner and the only outsider who can put an end to Gavin Newsom's disastrous time as governor."

Jenner is a Republican who has never sought public office. In recent years the 1976 Olympic decathlon gold medalist and reality television star has been a vocal advocate for the transgender community after coming out as a transwoman in 2015 and changing her name from Bruce to Caitlyn.

Newsom said in March that he expects the recall to qualify for the ballot. He also criticized the need for a special recall election, calling it a "waste of time" and money because the 2022 gubernatorial primary will be a few months later.

Newsom and his allies have tried to link recall supporters to former President Donald Trump, who is extremely unpopular in California.

Randy Economy, the senior advisor of RecallGavin2020, has described the recall effort as "a grassroots historical movement fueled by 2,125,000 people from all walks of life."

The recall requires valid signatures from 1,495,709 registered voters,12% of the 12,464,235 votes cast in the 2018 gubernatorial election, to qualify for the ballot, according to the Secretary of State's Office.

Organizers of the recall effort have focused on Newsom's handling of the coronavirus pandemic, criticizing his lockdown measures as too restrictive, saying he has "failed at his job and destroyed the lives and business of too many hardworking Californians,"  according to RecallGavin2020.

In response, Jenner tweeted, "Gavin Newsom is so threatened by our campaign that he's trying to fundraise off my announcement instead of focusing on doing his actual job."

"This is what entrenched politicians do," Jenner tweeted. "They play politics instead of doing what's right for the people of California."

"There are a lot of great people coming forward to run for governor," Economy said. "The campaign to replace Gavin Newsom just entered a new phase."

Businessman John Cox, who lost to Newsom in 2018, former San Diego Mayor Kevin Faulconer, and former Rep. Doug Ose, R-Sacramento, all Republicans have also announced their candidacies, along with retired adult-film actress Mary Carey, who finished 10th in the field of 135 candidates in the 2003 race to choose a successor to then-Gov. Gray Davis in what proved to be a successful attempt to recall him.