Cities across the country, including Beverly Hills, are bracing for possible protests once the verdict is announced in the Derek Chauvin trial.

BEVERLY HILLS, Calif. - The jury in the Derek Chauvin trial is expected to go into deliberations this week and cities across the country are bracing for possible protests once the verdict is announced, including Beverly Hills.

The jury in the Derek Chauvin trial is expected to go into deliberations this week and cities across the country are bracing for possible protests once the verdict is announced, including Beverly Hills.

"With the trial of former Minneapolis police officer Derek Chauvin nearing its conclusion and the potential for increased demonstrations and protest activity across the country, the city of Beverly Hills is taking a proactive approach to ensure our community is safe," Chief Rivetti said in a social media post. "The Beverly Hills Police Department will be on full alert throughout the residential and business district. Additionally, other law enforcement personnel and private security companies will offer support. As a precautionary measure, some businesses in the city may choose to limit operations during this time. The City may also take preventative measures  to protect city facilities and property."

Beverly Hills PD is also working with private security firms, which have already been booked by many businesses in the affluent area. K-rails are up on almost every block as authorities are prepared to shut down streets if necessary.

On Monday, FOX 11’s Gigi Graciette showed a metal barrier outside the Prada store that was installed after the protests in 2020. 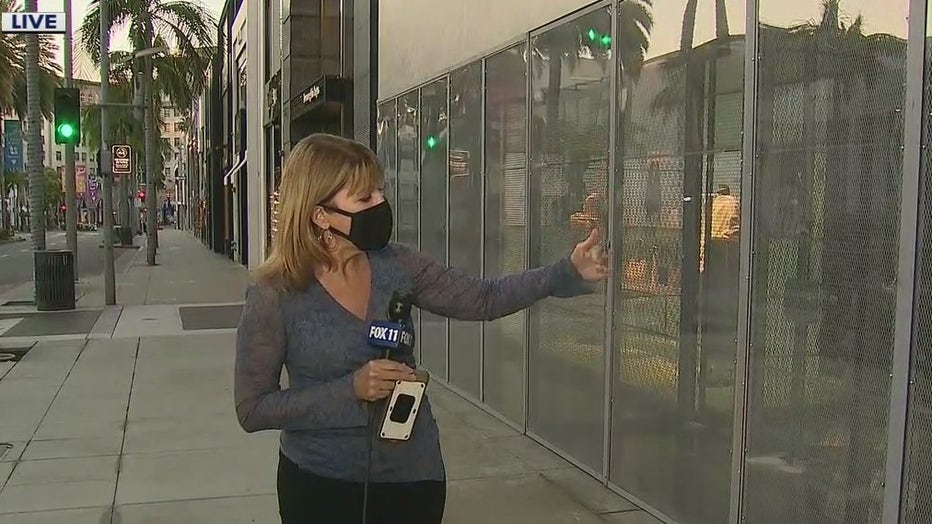 Protests and even riots erupted nationwide following the death of George Floyd when the former Minneapolis police officer knelt on Floyd's neck for nearly nine minutes. Witnesses recorded Floyd's death and the footage has been seen across the globe as many were on lockdown due to the coronavirus pandemic.

Nationwide, entire strips of businesses have already put up protective plywood in anticipation of the verdict.