Protesters gather around the world over George Floyd’s death

The death of the unarmed black man in Minneapolis has sparked outrage across the world.

MINNEAPOLIS - Protests to express outrage at the death of George Floyd have also prompted many organizations to create community bail funds to help protesters in their demand for justice and policy change in America.

Demonstrations have swept across the country since Floyd’s death during an encounter with Minneapolis police on May 25. More than 5,600 people have been arrested over the past week, according to a count by The Associated Press.

RELATED: The death of George Floyd: A timeline of a chaotic, emotional week in Minneapolis

The Minnesota Freedom Fund, a nonprofit that helps pay bail for those who cannot afford it, raised $20 million in a matter of days and is now encouraging donors on its website to support other nonprofits.

ActBlue, an online platform that processes donations for Democratic candidates, progressive organizations and nonprofits, has a page that enables donors to split their money between dozens of community bail funds.

Here are some other organizations helping to bail out protesters mobilized by Floyd’s death:

The Atlanta Solidarity Fund provides cash to get protesters released from jail as soon as possible and works to help get them access to a lawyer and navigate the legal system.

The Bail Project is a national nonprofit organization that pays bail for people in need, “reuniting families and restoring the presumption of innocence.”

The Chicago Community Bond Fund pays bond for people charged with crimes in Cook County, Illinois and aims to support individuals who cannot afford to pay bond themselves.

The Connecticut Bail Fund aims to reduce the direct harms caused by criminalization, incarceration and deportation “while building power among people and families most impacted by these systems,” according to its website.

The Kansas City Community Bail Fund said on its website it is prioritizing assistance to those arrested at a protest and “stands in solidarity with the protesters throughout the country seeking justice for the victims of police violence and spreading the message that #blacklivesmatter.”

The Las Vegas Freedom Fund was founded in 2018 in an effort to combat mass incarceration in Clark County, Nevada. The organization aims to free people in need, reunite families and restore the presumption of innocence.

The Louisville Community Bail Fund works to not only bail people out, but also provide post-release support to get them from jail, fed, and to a situation of safety.

The Memphis Community Bail Fund is a revolving fund supported by donations from the community. The organization “helps people avoid the potentially devastating consequences of extended pretrial detention,” according to its website.

The Philadelphia Community Bail Fund has a mission to end the cash bail system in the city. Until then, it posts bail for city residents who cannot afford to pay it. 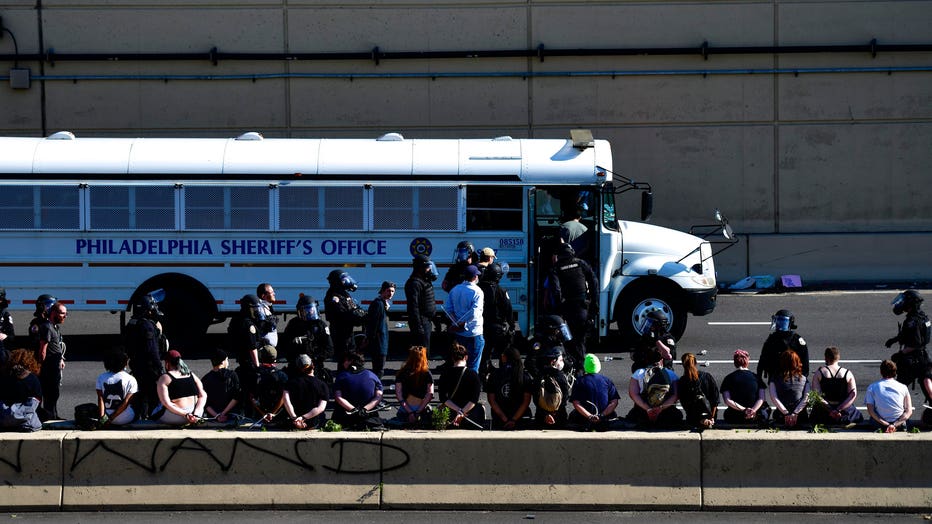 Arrested protesters stand and sit on a barrier of the Vine Street Expressway after tear gas was shot to disperse the crowd on June 1, 2020 in Philadelphia, Pennsylvania. (Photo by Mark Makela/Getty Images)

Reclaim The Block is a coalition to demand that Minneapolis city council members move money from the police department into other areas of the city’s budget that promote community health and safety.

There are dozens more bail fund organizations in states across the country. Click here for a more comprehensive list.

Floyd’s family has also launched a GoFundMe to cover funeral expenses, grief counseling, lodging and travel for court proceedings, and other areas the family may need assistance as it seeks justice for Floyd. A portion of the funds will also go to support the care of his children and their educational fund, according to the GoFundMe.

Floyd died after a police officer pressed his knee into his neck for several minutes even after he pleaded for air and stopped moving. Bystander video of the moment was widely shared on social media, sparking protests across America and beyond.