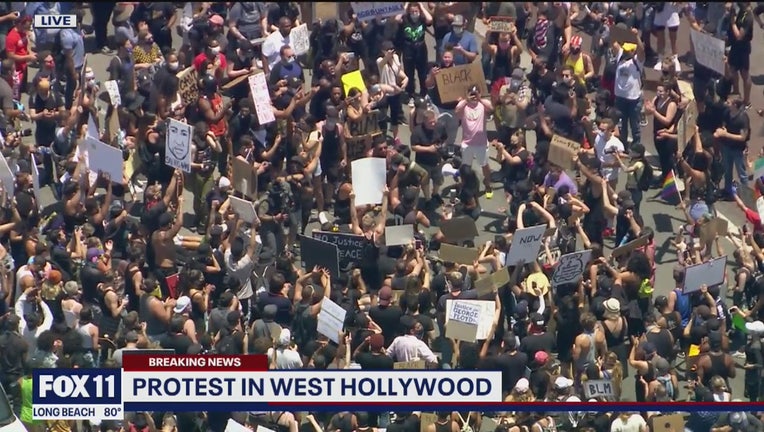 LOS ANGELES - Following a day of peaceful protests across Southern California, additional demonstrations were held Wednesday in the aftermath of the death of George Floyd as Angelenos continued to call for justice.

Floyd, 46, was killed on May 25 while in police custody in Minneapolis. His death was captured on camera as Officer Devin Chauvin with the Minneapolis Police Department kneeled on Floyd’s neck for nearly nine minutes, despite begging for his life along with the pleas of bystanders. His death has sparked international outrage. 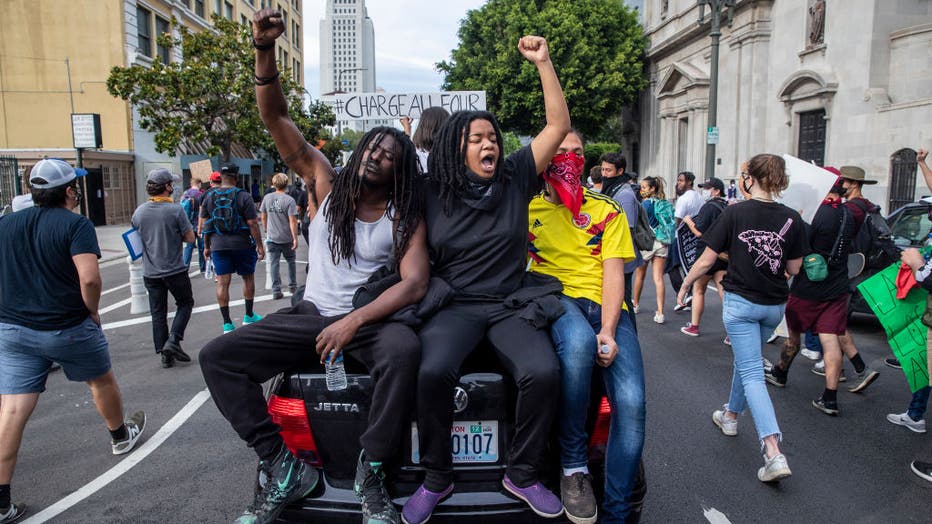 Chauvin was fired and has since been arrested and charged with third-degree murder and second-degree manslaughter.

On Wednesday, his chargers were upgraded to second-degree murder.

The other three officers involved in Floyd’s death, identified as Tou Thao, J. Alexander Kueng, and Thomas K. Lane, were also fired from the department and were charged Wednesday.

On Tuesday, the attorney representing Floyd’s family he predicted the three other officers will be charged next week before his funeral in his hometown of Houston scheduled for next week.

RELATED: Floyd family attorney predicts three other Minneapolis police officers will be charged by next week

Nationwide, people have taken to the streets to get their voices heard, including thousands in Los Angeles.

Wednesday's planned protests are listed below:

A peaceful protest started at Anaheim City Hall at noon. Demonstrators stood on the steps of City Hall, marched for about a block, and returned to the City Hall steps.

A peaceful protest took place in Anaheim on Wednesday afternoon. It was one of the demonstrations planned across Southern California following the death of George Floyd.

Beginning at 1 p.m., a protest is set to begin at the Clifton M. Brakensiek Library.

All the protests have been advertised on social media and it remains unclear if all protests will materialize.

A demonstration is scheduled to begin at 12 p.m. at Heritage Park.

A protest started outside Downey City Hall after 1 p.m.

The Downey Police Department tweeted and asked the public to avoid the Civic Center.

A Twitter user captured the moment Los Angeles Police Department officers and the National Guard moved toward the area where protesters gathered.

Amongst the crowd was a young protester, who was clearly angered by what happened to George Floyd. She said she has empathy for Floyd's young daughter.

“George Floyd had a daughter. Now that daughter is going to be heartbroken forever and I don’t even want to know what it’s like to lose my dad because my dad’s black but I don’t want to see any more black people getting killed like it’s nothing. This is sad and we need to make a change now,” 12-year-old Janiya Coleman told FOX 11’s Christina Gonzalez.

The event was organized by the Los Angeles chapter of Black Lives Matter.

A peaceful protest was planned in Garden Grove at 4 p.m.

Organizers have asked protesters to practice social distancing, to wear masks, and to wear black clothing. They are also asking that demonstrators bring googles and to not bring their cell phones.

The march will begin at City Hall.

Starting at 3:30 p.m., a demonstration is set to begin at the corner of La Brea and Centinela avenues.

Starting at noon at the La Verne City Hall, protesters were expected to march a mile to Mainiero Square.

Protesters are set to gather at Heartwell Park starting at 11:30 a.m.

The Montrose Shopping Park Association is scheduled to hold a protest beginning at 10 a.m.

Four protests were planned in Newport Beach on Wednesday.

Following a day of peaceful protests across Southern California and as authorities implement ongoing curfew orders, additional protests were planned during daylight hours on Wednesday in the aftermath of the death of George Floyd.

Those who wish to attend are asked to gather on the sidewalk in front of West Hills Baseball, located at 7001 Valley Circle Boulevard.

After thousands joined a Hollywood protest Tuesday that was organized by a student and even shared by rapper YG, another protest began in the adjacent West Hollywood at 12 p.m. at the corner of Santa Monica and La Cienega boulevards.

The event was organized by the LGBTQ community in support of Black Lives Matter.

Several demonstrators planted themselves on the hot asphalt, just as George Floyd spent his final moments, to show their solidarity for him and against police brutality.

“I’m brought out by the injustices to the black community. It’s not right what’s going on to them. We’ve seen countless videos of people that are being mistreated based on the color of their skin and it’s not right,” a protester told FOX 11’s Susan Hirasuna.

Several demonstrators planted themselves on the hot asphalt, just as George Floyd spent his final moments in the hands of police, to show their solidarity for him and against police brutality.

Moments later, the crowd took a knee during a moment of silence.

Protesters take a knee during moment of silence for George Floyd

Moments after protesters laid on the hot asphalt, they took a knee during a moment of silence for George Floyd in West Hollywood on Wednesday afternoon.

A protest was set to begin at 2 p.m. at the intersection of Amar Road and Hacienda Boulevard.