Nearly a dozen beagles rescued from an animal testing facility have come to Anaheim with the hopes of finding homes for the holidays.

ANAHEIM, Calif. - A dozen rescue beagles made their way to Anaheim Sunday after years in captivity at an out-of-state breeding facility, and are now well on their way to adoption.

The pups are cute, but traumatized, according to Mary Pryor, the founder of Cage to Couch, which has taken the dogs in. Her organization aims to rescue dogs who were tested for pharmaceutical and cosmetic use. The testing is legal, she said, but often times, she adds, dogs are bred for the companies and then euthanized after their work is over.

Beagles are preferred for animal testing because they are "docile, sweet, trusting, and they don’t fight back," according to the Beagle Freedom Project.

The dogs brought to Cage to Couch Sunday are as young as one-and-a-half years old. Pryor said she negotiates with companies, so the animals are not killed but instead are allowed to live. 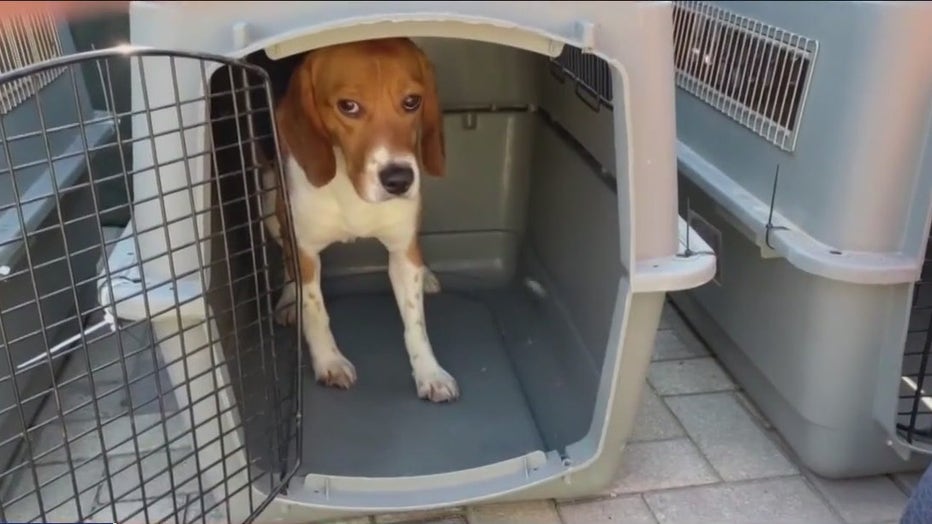 Coral, Michele and their mom Columba are some of those who want to foster one of these 12 beagles. Coral said she believes she's got the patience for it, something Kira Westmoreland said she'll need plenty of. Westmoreland has fostered dogs like these before. The two she currently has, have night terrors.

"It’s very hard to see them struggle through the trauma of trying to come back to a normal life," Westmoreland said.

Caring for these animals takes a ton of tender loving care and attention. Coral Rojas said she’s ready for just that. She noticed the dog she was holding — named Ivy — trembling, not making eye contact. A tear dropped from her eye, remembering the 17-year-old beagle she just had to put down. His name was Bingo. She said he was, "like my best friend." She misses him.

Coral signed on the dotted line and brought Ivy home to meet the rest of the family — introduced her to Olive and Mickey, her two other dogs, and showed Ivy her new bed. Now, Ivy has a home for the holidays.

If you have an interest fostering one of these animals, or any of those rescued by Cage to Couch, you can visit cagetocouch.org.