Man accused of DUI had Gila monster in his car

MESA, Ariz. - Police made a surprising discovery during a DUI investigation in Mesa.

Mesa Police say officers found 37-year-old Brandon Denney asleep in his car just before 11:30 p.m. on June 5 near Signal Butte and Southern Avenue, with a pill bottle in his hand.

Officers then woke up Denney to conduct field sobriety tests.

During their investigation, officers noticed a Gila monster poking its head out of a box inside the car.

"Denney said he had run the Gila Monster over with his vehicle and decided to pick it up after seeing it was injured," police said in a news release. "Unlike Denney's story, the Gila Monster did not appear to be run over and had no visible injuries."

Denney was arrested for suspicion of DUI. While searching his vehicle, officers found cocaine, methamphetamine, fentanyl, and drug paraphernalia.

Police also said Denney had three outstanding felony warrants – two for kidnapping out of California with bonds of over $1 million and $300,000, and a third for attempted grand larceny out of Nevada for $50,000.

The Gila monster was turned over to the Arizona Game and Fish Department, who say they will charge Denney because it is illegal in Arizona to own or sell a Gila monster without a permit.

Denny was booked into jail. 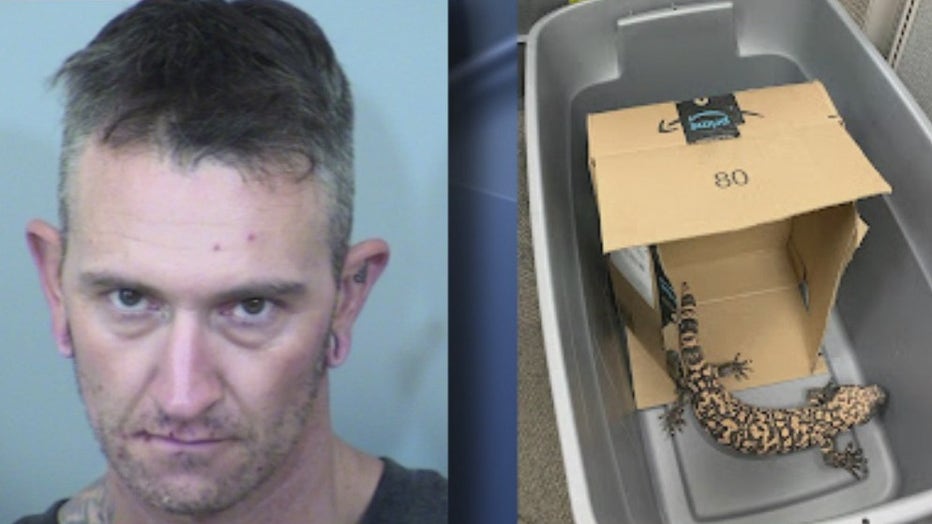 While investigating 37-year-old Brandon Denney for suspicion of DUI, officers made a surprising discovery -- a Gila monster in the man's car. (Mesa Police Department)