GLENDALE - Eight people were arrested in connection with five incidents in which stolen cars were recovered in Glendale.

The incidents were described by Glendale police each on separate days spanning back to late February. 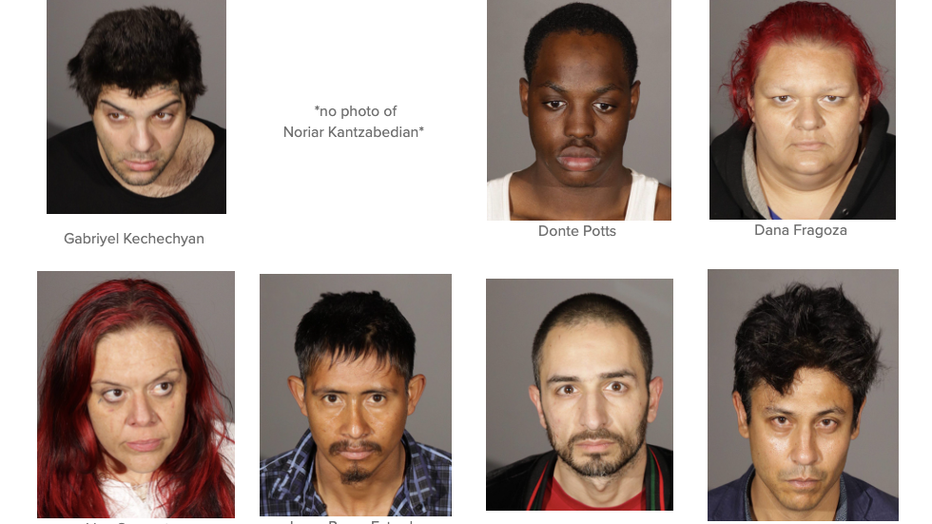 Feb. 23: Gabriyel Kechechyan of Los Angeles and Noriar Kantzabedian, 35, of Burbank were arrested on separate charges after officers stopped them in the 1400 block of Raymond Avenue in a stolen vehicle. Kechechyan was arrested and booked for vehicle theft, possessing a controlled substance, and an outstanding arrest warrant. Kantzabedian was arrested for possessing unlawful paraphernalia and controlled substances. Methamphetamine was recovered in the car.

March 8: Donte Potts, 18, of Los Angeles, was arrested for grand theft auto. He was in Los Feliz on the Golden State Freeway when authorities conducted a felony stop.

March 21: Dana Fragoza, 33, of Los Angeles, Lisa Carpenter, 39, and Jorge Perez-Estrada, 29, of Los Angeles were arrested after trying to flee the scene where a stolen car was located near Flower Street and Western Avenue. Four packages belonging to different people containing a meth pipe, meth, a catalytic converter, and other items were recovered during a vehicle search. All three were arrested on numerous charges including vehicle theft, grand theft, possession, and identity theft.

March 29: Hayk Vardanyan, 33, of North Hollywood, was arrested in a stolen car with meth and heroin inside. He was traveling in the area of Colorado Street and Pacific Avenue. Vardanyan was arrested and booked for vehicle theft, possessing narcotics, and possessing a controlled substance.

March 31: Adam Narito, 41, of Los Angeles, was arrested in connection with a stolen motorcycle found on the 2900 block of Colorado Boulevard. He was booked for vehicle theft, possessing metal knuckles, and controlled substance items.

It is unclear at this time if any of the incidents are connected.