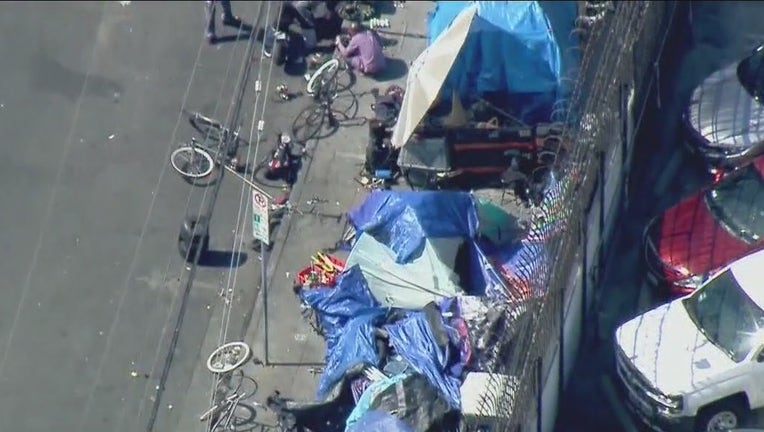 LOS ANGELES - A development company announced Friday it hopes to build a $2 billion mixed-use project on a 7.6-acre site in the Skid Row area.

Denver-based Continuum Partners submitted an application for the project, called Fourth & Central for its intersection, to city planners on Thursday, a spokesman said.

The project would be different from FLOR 401 Lofts, a supportive housing community that opened in the heart of Los Angeles’ Skid Row.

RELATED: New supportive housing community for the homeless opens up in the heart of Skid Row

The development would include 1,521 residential units, 401,000 square feet of office space, 93,000 square feet of retail and restaurant space and a 68-room hotel. The plan includes 10 distinct buildings ranging from two to 42 stories tall.

While the developer has advertised the location of the development as the Arts District, the project sits within the borders of Skid Row, which has an unhoused population in the thousands and is typically described as the area within Third Street to the north, Seventh Street to the south, Alameda Street to the east and Main Street to the west.

The project would be developed in partnership with L.A. Cold Storage, which has been in business since 1895 and has owned and operated its industrial facility at the site for almost 50 years.

"LA Cold Storage will find a new home at a more fitting location, and our current site will be a new home and community to thousands of Angelenos -- that gives me a tremendous amount of pride," L.A. Cold Storage President Larry Rauch said. "This property has given me and my family so much, and a new location will afford us the opportunity to expand and best serve our customers."

Continuum Partners hopes to begin construction in 2024. The project's estimated cost is between $1.5 and $2 billion, according to a representative for the developer, which said it would prioritize making the area a pedestrian-oriented community.

"We are very bullish about the future of Los Angeles, particularly Downtown," said Mark Falcone, CEO and founder of Continuum Partners. "Our team is especially looking forward to being part of the massive transit infrastructure coming to DTLA, which will reshape the entire region over the next 20 years and help L.A. lead the nation towards a more equitable 21st-century city."

On April 20, U.S. District Judge David O. Carter ordered the city and county of Los Angeles to provide all indigent persons on Skid Row with shelter within six months.

The sprawling 50-block area just blocks from Staples Center contains one of the largest populations of unhoused residents in the U.S.

Carter wrote in his order that Skid Row was a decades-old byproduct of systemic racism that left Black people -- especially Black women -- "effectively abandoned on the streets. Such governmental inertia has affected not only Black Angelenos, not only homeless Angelenos, but all Angelenos -- of every race, gender identity, and social class."