Candidates on the campaign trail in the governor’s race

GOP candidate John Cox and his bear grabbing all the attention, as the recall against Governor Gavin Newsom shifts into high gear.

Cox, a 65-year-old businessman who lost in a landslide to Newsom in 2018, released a video calling himself "the beast" to the photogenic Newsom's "beauty." 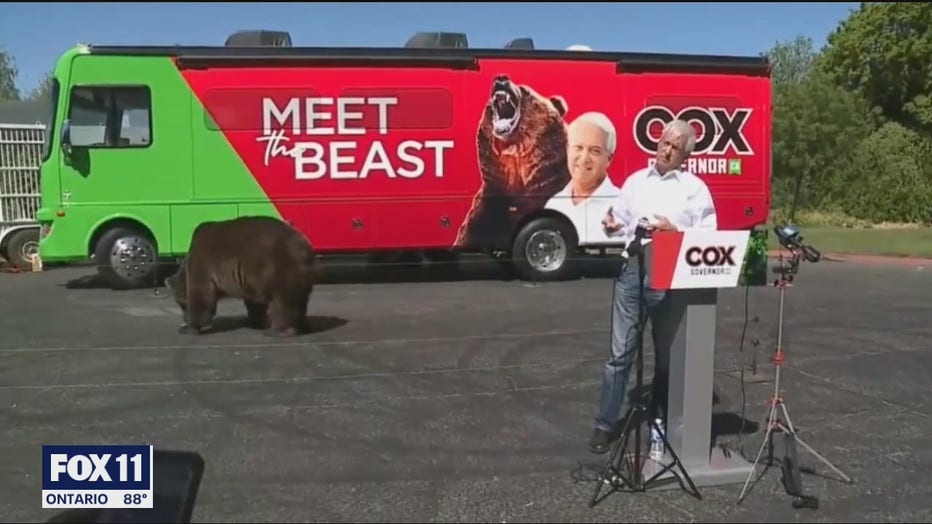 Launching a bus tour in Sacramento with a live Kodiak bear named Tag ambling behind him in the hot sun, Cox promised to bring "beastly" changes to state government. He spent $5 million to begin airing a 30-second version on television statewide, his campaign said, a major amount this early in the campaign and indicative of the need to raise his profile in a crowded field.

Cox all but admitted the bear's appearance was a stunt aimed at drawing eyes to his campaign, but promised to discuss "serious issues" -- like bringing down the cost of housing, boosting the state's water resources and preventing special interests from influencing government.

"You have to get this message out and that's what we're going to do here," he said.

Jenner, meanwhile, released a video with a more inspirational and patriotic tone. She calls herself a "compassionate disruptor" in the ad that features clips from her Summer Olympics appearance in 1976, when she won the gold medal in the men's decathlon.

Jenner, now a 71-year-old transgender woman, has held no campaign events since announcing her candidacy nearly two weeks ago, though a televised town hall in her hometown of Malibu is planned for Wednesday. The ad offers her most expansive commentary as a candidate.

"I'm running to be governor for all Californians, to reclaim our true identity, to bring back the gold to the Golden State," Jenner says in the ad.

The ad shows a photo of Newsom only once and never says his name, though she is clearly blasting his pandemic policies by highlighting closed businesses and kids out of school. Jenner's campaign didn't immediately answer whether the campaign was running corresponding ads on television or whether the pitch was digital only.

The release of the ads marked a new phase in the campaign. Newsom, a Democrat, planned to hold a recall-focused event later Tuesday with two firefighter unions, one of his first explicit campaign events.

Newsom wasn't expected to face an election until 2022 but critics of his coronavirus response and liberal policies succeeded in collecting more than the 1.5 million signatures needed to for a recall election.

There are still several steps remaining before the election is officially certified but the signatures collection and verification were the biggest hurdles. The election will likely be scheduled for the fall.

Cox won less than 40% of the vote against Newsom in 2018 and has never won elected office despite many attempts. But he said that run gives him a statewide base to grow this time around. Faulconer has not run a statewide campaign and Ose briefly ran for governor in 2018 before dropping out.

Cox pitched himself Tuesday as a man who knows struggle. He grew up with a single mom, paid his way through college, and launched a successful business career, mostly in real estate. He's already spent $10 million of his own money on the race and said he is willing to spend more.

"Millions of people voted for something named John Cox but he was never a very, I don't think, a very clearly defined John Cox, and so we're going to define him a lot better," said Fred Davis, an ad-maker now working for Cox who is known for creating quirky, attention-grabbing political spots, including the "demon sheep" ad in Carly Fiorina's unsuccessful 2010 bid against California U.S. Sen. Barbara Boxer.

Cox twice declined to answer whether he'd welcome former President Donald Trump to campaign for him. Trump endorsed Cox in 2018 but is unpopular in the state.

"The pretty boy politician is going to make it all about the former president and the partisan battles of the past. This is about the California of the here and now," Cox said.

Jenner is working with several former aides to Trump.